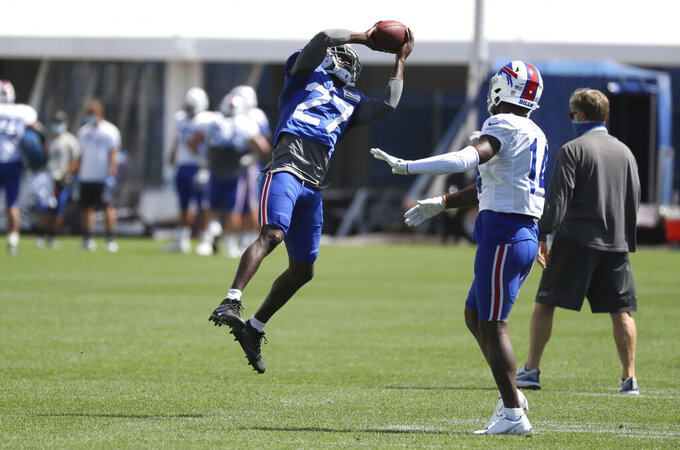 BUFFALO, N.Y. (AP) — The Buffalo Bills locked up starting cornerback Tre’Davious White through the 2025 season by signing him to a four-year contract extension on Saturday.

White was entering the final year of his rookie contract, though the Bills held the option to extend his contract for one more season next year.

The 25-year-old White has been a starter since being selected with the 27th pick in the 2017 draft out of LSU, and established himself as one of the league’s top up-and-coming cornerbacks.

Last year, he had a career-high six interceptions, which finished tied for the league lead, and earned his first All-Pro selection. He also became Buffalo’s first player to earn two AFC defensive player of the week honors in one season since defensive end Mario Williams in 2013.

White earned his first honor after he had an interception and a forced fumble in a 31-21 win over Miami on Oct. 20. He was honored again after a two-interception outing in a playoff-clinching 17-10 win at Pittsburgh on Dec. 15.

White did not give up a touchdown last season, and ranked second among NFL defenders in limiting opposing quarterbacks to a 38.9 passer rating.

Overall, he has 12 interceptions, two forced fumbles and two fumble recoveries in 47 starts.

White joins left tackle Dion Dawkins and coach Sean McDermott, who also signed contract extensions this summer. Buffalo has reached the playoffs in two of its past three seasons under McDermott, who took over a team in 2017 which had gone 17 years without a playoff appearance — the NFL's longest drought at that time.