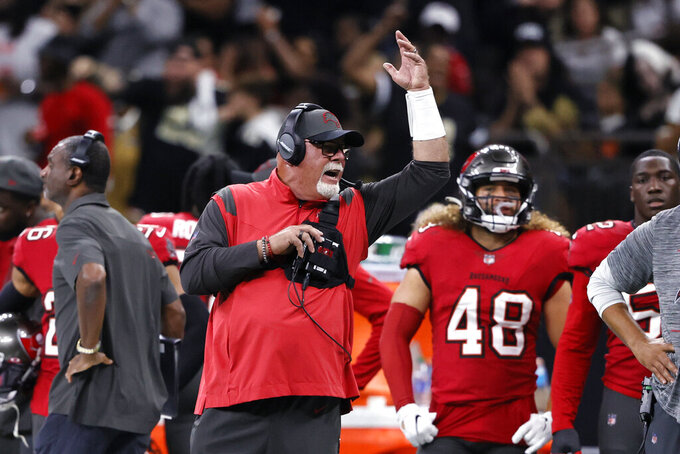 The Super Bowl champions have lost two straight games in which Tom Brady and a usually reliable defense haven’t been at their best. They’ll try to get back on track when they host the New York Giants on Monday night.

Turnovers, costly penalties and an inability get off the field on third down defensively undermined the Bucs (6-3) in road losses to the New Orleans Saints and the Washington Football Team.

Arians is confident, though, the NFC South leaders can right the ship.

“I mean we’ve played up to our potential, it’s just the last two weeks on the road we haven’t,” the coach said.

“We’re still in first place, and we’ve got a lot of good things going on as far as (being) No. 1 in pass offense and sacks (allowed), and all the things we’re doing offensively and defensively,” Arians added. “But there are some things we have identified on the road that have cost us two ballgames.”

The Giants (3-6), who could get injured running back Saquon Barkley back this week, have won two of their past three.

They're rested coming off last week's bye and have played the Bucs tough the last two seasons, rallying from an 18-point deficit to win at Tampa Bay in Daniel Jones’ first NFL start in 2019 and losing to the eventual NFL champions after leading at halftime of a prime-time matchup a year ago.

Jones, who has thrown for 2,059 yards, eight touchdowns and five interceptions, is excited about the challenge of facing the Brady-led Bucs again.

“Anytime you play these Monday night games, it’s an opportunity for us and you get up to play these games,” the third-year Giants quarterback said.

“Certainly, a lot of respect for Tom Brady, what he’s accomplished, how he’s played the position for as long as he has, but ... we’re playing against the Bucs defense and preparing to play against them,” Jones added. “We’re looking forward to it.”

Brady is third in the NFL with 2,870 yards passing and has thrown for a league-leading 27 TDs despite playing much of the past six weeks without injured tight end Rob Gronkowski and wide receiver Antonio Brown.

The 44-year-old, seven-time Super Bowl champion aims to rebound against the Giants after throwing a pair of interceptions in each of his past two games.

New York expects to see him at his best.

“They’re going to make a Mount Rushmore of football players at some point, the first face they chisel will be that guy’s face. He’s the best player who ever walked,” Giants offensive coordinator Jason Garrett said.

After struggling for six games, the Giants’ defense has finally started playing like the unit that carried the team last season.

It has given up 39 points in winning two of the last three games. The key factor has been third down. Carolina was limited to 2 of 15 in New York’s 25-3 win on Oct. 24. In a Monday night game at Kansas City, Patrick Mahomes and the Chiefs were 5 of 12 on third down, edging the Giants 20-17. Coordinator Pat Graham’s unit held a potent Raiders offense to 4 of 12 in a 23-16 win before the break.

The Giants are a plus-4 in the last three games in the turnover differential.

For the first time this season, the Giants have started the same offensive line in three straight games: Matt Peart at left tackle, Matt Skura at left guard, Billy Price at center, Will Hernandez at right guard and Nate Solder at right tackle.

That might change this week with Andrew Thomas returning to practice after missing the last three games while on injured reserve with foot and ankle injuries.

Thomas has been the left tackle since being taken No. 4 overall in the 2020 draft. He was having an exceptional season before being hurt, so expect him back on the left side if he plays.

So much is made of the plethora of playmakers Brady has at his disposal, a group that includes receivers Mike Evans, Chris Godwin and Brown and tight ends Gronkowski, O.J. Howard and Cameron Brate.

With Brown (ankle) and Gronkowski (ribs) sidelined by injuries, though, the team’s depth has been tested.

“I think the other guys stepped up, but you take two great players out, possible Hall of Famers, yeah, you’re going to miss them,” Arians said.

The Bucs are 5-0 with Brown in the lineup this season, 1-3 without.

“Any time you take out a player of that caliber you’re going to miss him. I think Tyler (Johnson) has done a good job, but he’s not AB. There’s nobody that we’re going to put out there that’s AB,” Arians said. “When you have Mike (Evans), Chris (Godwin) and AB, you’ve got three No. 1s. That’s tough to defend.”