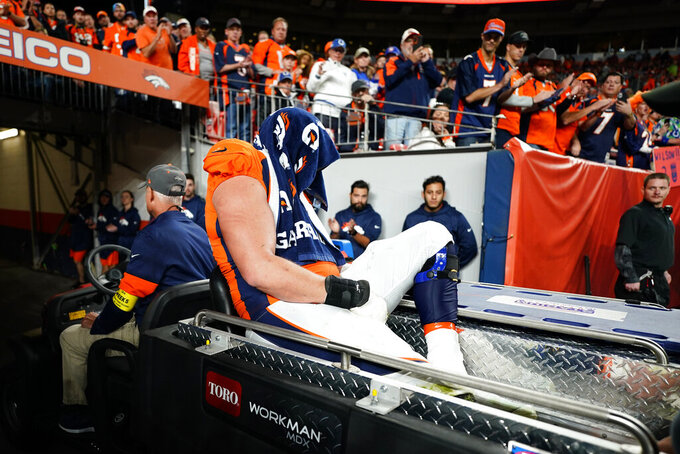 Denver Broncos offensive tackle Garett Bolles is carted off the field after an injury against the Indianapolis Colts during the second half of an NFL football game, Thursday, Oct. 6, 2022, in Denver. (AP Photo/Jack Dempsey)

They were injured in Denver's 12-9 loss to the Indianapolis Colts on Thursday night, just four days after the Broncos lost star running back Javonte Williams to a right knee injury in a loss at Las Vegas.

Darby was off to a terrific start this season and Bolles was the Broncos' best offensive lineman. Williams was their leading rusher last year and this year and the Broncos (2-3) lost last year's leading receiver, Tim Patrick, to a torn ACL in August.

The eighth-year cornerback left late in the first half Thursday night after collecting two tackles and breaking up a pass. On the season, he had 14 tackles, three pass breakups and a forced fumble.

Bolles was carted off the field with a towel draped over his head after injuring his right leg in the second half. He's been the picture of stability on Denver's O-line since he was selected in the first round in 2017.

He's only missed four games, one in 2020 and three last season.

“That’s part of this game, and as a coach, I can’t control it. I can only move forward. I can only go to the drawing board and grind and try to find ways to put people in good positions with the new guys that are going to have to go in there,” coach Nathaniel Hackett said Friday. "We have to find a way to make those guys successful. I mean, that’s our job.

“And it crushes me because they’re such good guys and they’ve worked so hard,” Hackett added. “And you know, we’re 2-3 right now and it’s not where we wanted to be but that’s where we are. And I feel bad for those guys that they can’t be part of bringing us out of this, but they are going to be there for us.”

Calvin Anderson replaced Bolles at left tackle in the game. Hackett said right tackle Billy Turner, the only active non-QB who didn't get into the game, could have played but he wanted to give him more time as he works his way back from an offseason knee operation.

Turner has missed all five games so far but has been on the 53-man roster all season because Hackett expected him back last month and chose not to put him on IR to free up his roster spot.

Hackett got better news Friday on inside linebacker Josey Jewell (sprained knee), who is week-to-week, and outside linebacker Baron Browning, who is day-to-day with a sprained wrist.

The Broncos have a quasi-bye week now because their next game isn't until Monday night, Oct. 17, against the Chargers in Los Angeles.

By Teresa M. Walker 46 minutes ago
By John Marshall an hour ago
By Greg Beacham 2 hrs ago
By Tom Withers 2 hrs ago
By Rob Maaddi 3 hrs ago