Browns again hurt themselves in painful road loss to Falcons 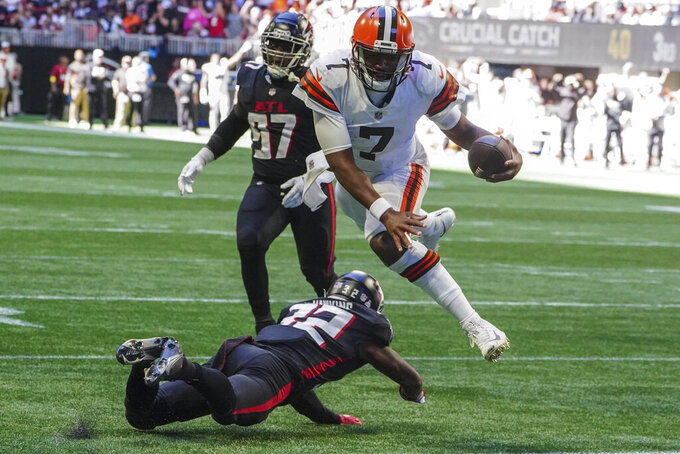 Cleveland Browns quarterback Jacoby Brissett (7) leaps for a touchdown during the first half of an NFL football game, Sunday, Oct. 2, 2022, in Atlanta. (AP Photo/John Bazemore)

CLEVELAND (AP) — Myles Garrett's car crash triggered another week of distractions for the Browns, leading to a familiar frustrating finish on Sunday.

They're their own worst enemy.

Cleveland's inability to score in the red zone and a costly defensive breakdown — a problem in the first two games — from a unit missing Garrett and two other starters, contributed to a 23-20 loss to the Atlanta Falcons on Sunday.

Also, there were some questionable decisions made by coach Kevin Stefanski, who was a maestro with his play-calling in getting the Browns to the edge of the goal line before dropping his baton.

Cleveland twice reached Atlanta's 2-yard line in the first half, but came away with just three points. Worse, the Browns ran 11 plays inside Atlanta's 11 before halftime and picked up 3 yards.

On Monday, Stefanski offered little insight into his reasoning behind some of his red-zone play calls — he's being first-, second- and third-guessed for not kicking a field goal on an early 4th-and-3 that failed — but didn't duck accountability.

“We have a lot of coaches upstairs. For me in all of those decisions, it's 100 percent me making the decision,” he said. "I take in information from our coaches and from our staff up in the booth and on the sideline, and then ultimately, you have to own them.

“When they don’t work, you're frustrated, but it's my decision.”

On the defensive side, it hurt to be without Garrett, Cleveland's All-Pro defensive end, following his car crash a week ago. Garrett is recovering from injuries to his left shoulder and right biceps, along with the emotional toll of a close call for him and a female passenger.

It's not clear when he'll be back.

Minus Garrett and Jadeveon Clowney, who missed his second straight game with an ankle injury, Cleveland didn't put enough pressure on Falcons quarterback Marcus Mariota, and there was a problem setting the edge to stop running plays.

Still, the game was tied 20-all in the fourth quarter when the Browns left Falcons receiver Olamide Zaccheaus wide open for a 42-yard reception that helped set up Atlanta's go-ahead field goal with 2:28 left.

Stefanski blamed the gaffe on a “technique" issue.

It's the small mistakes that have been so costly for Cleveland.

The Browns (2-2) reached the season's unofficial quarter pole a .500 team. That's not bad as they wait for quarterback Deshaun Watson to return from his 11-game suspension for alleged sexual misconduct. But it could have been better, considering this was supposed to be the easier portion of the schedule.

In Week 2, the Browns blew a 13-point lead in the final 1:55 and lost a heartbreaker to the New York Jets. On Sunday, similar miscues came back to bite them — and could return to haunt them later.

“It's never OK when as a team we beat ourselves,” said tight end David Njoku, who had a costly fumble in the first quarter. “We are just going to go back to the drawing board, go back to work and correct the mistakes.

“I feel like our mistakes on both sides of the ball, it’s inches. The margin for error in the NFL is very small. I feel like we’re right there.”

Nick Chubb had another strong game in his Georgia homecoming. He rushed for 118 yards, averaged 6.2 yards per carry and scored on a 28-yard run to thrill his family, friends and high school football team from his hometown.

Atlanta ran the ball down Cleveland's throat in the second half and finished with 202 yards rushing — doing to the Browns what they typically do to opponents.

On the plus side, some of the young defensive linemen got valuable experience which will help if Garrett and Clowney are out longer.

Donovan Peoples-Jones caught five passes for a season-high 71 yards. Peoples-Jones battled the sun and a defender while hauling in a beautifully thrown 42-yard pass by Jacoby Brissett.

Amari Cooper was bottled up by the Falcons, who paid extra attention to Cleveland's No. 1 wide receiver. Cooper was held to one catch on four targets for 9 yards.

Garrett's sprained left shoulder could bother him for a few more weeks. Stefanski said he'll have a better sense of Garrett's status on Wednesday.

The Browns were also without starting defensive tackle Taven Bryan because of a hamstring injury. Stefanski didn't have an update on rookie Jerome Ford, who suffered an ankle injury in the first quarter and didn't return.

25: Career 100-yard rushing games in four-plus seasons for Chubb. Only Hall of Famers Leroy Kelly (27) and Jim Brown (58) have more in Cleveland history.

Another stiff defensive test at home against Justin Herbert and the Los Angeles Chargers, who won a 47-42 shootout against the Browns last year.