Browns-Chiefs a juicy headliner for Week 1 of NFL schedule 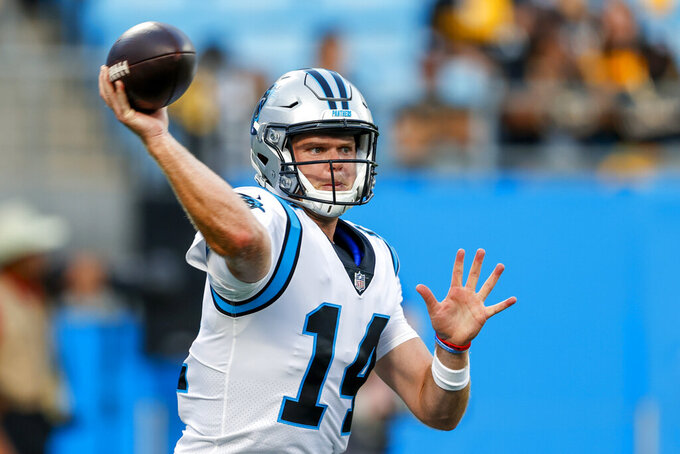 The Chiefs have been hanging with the NFL elite almost since Andy Reid arrived as coach in 2013. For most of that period, the Browns were putrid.

As the first full weekend of the 2021 schedule gets going, Cleveland just might be the biggest threat to Kansas City making a third straight trip to the Super Bowl.

Yes, those Browns, who until Kevin Stefanski arrived and won top coaching honors last year were never in the conversation for the AFC title.

Now they are, probably deservedly after an 11-5 season, their first playoff appearance since 2002 and first postseason win since 1994. After winning at archrival Pittsburgh, the Browns tested the Chiefs before falling 22-17 in the divisional round.

“I think we are so far past last season," says Stefanski, who knows the Browns have lost five straight to the Chiefs and are 3-10-1 in Kansas City. "We obviously go back and look at the tape and see what we could have done differently, what they did and what they might do this game. In terms of taking last season into this season, I think we are way past that.”

To get past Reid, Patrick Mahomes and the Chiefs — on Sunday at Arrowhead Stadium and overall — would be yet another major achievement for Cleveland.

“We erased last year,” quarterback Baker Mayfield says. “We’re trying to start from Game 0 and move on from there.”

With the Chiefs seeking to equal the Dolphins, Bills and Patriots — yes, all AFC East teams — as the only clubs to reach three straight Super Bowls, Reid is cautious.

“We’re all striving to get to the Super Bowl and win the Super Bowl, everybody in the league, Reid says. "But going through the process ... it’s important that you take care of what you can control, and that’s mastering this game plan and mastering the guys you go against, studying them, and then go play.”

Dallas quarterback Dak Prescott, in his return from a gruesome ankle injury, threw for 403 yards and three touchdowns.

The game was played before the first full stadium in the NFL since before the coronavirus pandemic.

The other power in the AFC seems to be the Bills. If they keep protecting Josh Allen the way they have previously against the Steelers, they could be in business Sunday. The Steelers have topped the NFL in sacks each of the last four seasons but have gotten to Allen just twice in two meetings.

Pittsburgh opens on the road for the seventh straight season, having gone 3-2-1 in the past six. The Bills are 3-1 in season openers under coach Sean McDermott.

Sixteen years after Hurricane Katrina forced the Saints to play all their games away from New Orleans, they host the Packers at the Jaguars' home because of damage to the Big Easy from Hurricane Ida.

“I actually think the opposite is going to take place,” says coach Sean Payton, referring to the entire team’s relocation to a hotel with many family members in tow. “You’re actually bringing a team a little closer together and it happens to come right at the start of the season ... I don’t think it’s something I look at in negative light.”

Facing Aaron Rodgers, who won his third NFL MVP award last season, and a potent offense is quite a positive for the Saints, though.

If new QB Carson Wentz is recovered from a variety of setbacks, he'll make his Colts debut. But it's the Indianapolis defense that could decide this game.

Seattle, usually renowned for its hard-hitting defense, has a dangerous passing attack led by Russell Wilson throwing to DK Metcalf and Tyler Lockett. In 2020, Metcalf and Lockett became the second Seahawks receiving tandem to top 1,000 yards in the same season, and both are deep threats.

The Chargers have 22 players new to the roster, including three free agent signings on the offensive line. Returning standouts edge rusher Joey Bosa and safety Derwin James on keys on defense.

Rams coach Sean McVay certainly seems to be enjoying the addition of veteran Matthew Stafford as his quarterback.

“He has got such a great lens that he sees the game through and I’ve been able to learn a lot from him, as I know of some of our other coaches and his teammates,” McVay says. "So, he has got such a great inventory of things to be able to draw on, and that’s a really beneficial thing for our offense and especially for me.”

The Bears often have faced Stafford from when he was with Detroit. This could be much less enjoyable for Chicago, which is 11-9 against him.

Possibly the most damaging injury of the preseason was the torn-up knee for Ravens running back J.K. Dobbins. Baltimore relies so much on its ground game, so now Gus Edwards and quarterback Lamar Jackson, a resourceful runner, will see more duty.

The Raiders finally get to experience a home crowd just off the Vegas Strip. Time to show something entertaining: They are 19-29 in Jon Gruden's second stint in charge.

While there's more to this matchup than former Jets quarterback Sam Darnold facing them, and the rookie who has replaced him, Zach Wilson, getting his NFL indoctrination, those seem the best reasons to pay attention.

Carolina, despite injuries to key players including star RB Christian McCaffrey, showed spirit and spunk in 2020 under first-year coach Matt Rhule. New York displayed none of that in a 2-14 season under Adam Gase, and now Robert Saleh takes over the team with the longest postseason drought, since 2011.

Whichever of these teams, if either, becomes a challenge to the new king of the AFC East, the Bills, it needs to win this one. With the focus on the two most recent Alabama quarterbacks, New England rookie Mac Jones and Miami's second-year player Tua Tagovailoa, the real key probably lies on the other side of the ball.

Brian Flores was one of the masterminds of the Patriots' D before becoming head coach in Miami, and New England added some key pieces to an already strong unit.

The vibes out of Minnesota have not exactly been positive this summer. Coach Mike Zimmer made that clear regarding the vaccination topic.

Cincinnati needs to find out how fit QB Joe Burrow is following his knee surgery that cost him the second half of the 2020 schedule. He played all of one series in preseason.

Let's not forget that less than two years ago, the 49ers were leading the Super Bowl in the fourth quarter. They were the team most impacted by injuries in 2020 and fell to the bottom of the tough NFC West.

Most of those key players, particularly edge rusher Nick Bosa, tight end George Kittle, and QB Jimmy Garoppolo, are back. San Francisco gets to open against a struggling franchise with a new head coach, Dan Campbell, and a new quarterback, Jared Goff. The Niners have won 10 of the last 11 meetings.

2020 Offensive Player of the Year Derrick Henry's quest for the NFL rushing record held by Eric Dickerson begins against a defense that added J.J. Watt. Remember, Henry has an extra game this season to chase that mark of 2,105 yards in 1984; he rushed for 2,027.

Arizona could be one of the league's most exciting outfits with Kyler Murray running and throwing to the likes of DeAndre Hopkins, while Watt tries to recapture the form that took him to three Defensive Player of the Year awards.

There's plenty of enthusiasm in Denver with Von Miller returning from injury to bolster a pretty good defense. The Broncos also have a solid corps of receivers for veteran QB Teddy Bridgewater, and their early schedule has the Giants, Jaguars and Jets. Time to make strides.

New York hopes third-year quarterback Daniel Jones makes major strides, and the Giants brought in a No. 1 wideout in Kenny Golladay. They also get back outstanding running back Saquon Barkley, though his recovery from last season's knee injury has been slow enough that he could miss this match.

One of two matchups with first-year head coaches, the Eagles' Nick Sirianni and the Falcons' Arthur Smith. Neither had held the top job at any level of their coaching careers.

Philly was destroyed by injuries in finishing last in the weak NFC East and Atlanta couldn't stop anybody in 2020. Sirianni and Smith were offensive coordinators a year ago, in Indianapolis and Tennessee, with both teams making the playoffs.

David Culley, the only Black man hired for seven opening for head coaches this year, is a career assistant with 43 years of total coaching experience. He takes over perhaps the least-talented roster in the league.