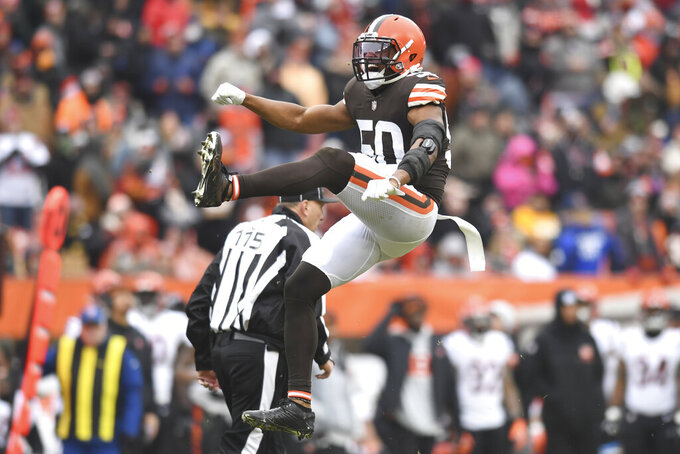 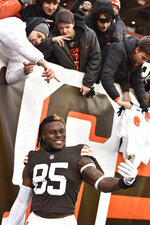 CLEVELAND (AP) — Unlike previous losing seasons for the Browns, and there's a long list of them, this one wasn't followed by firings, upheaval or drama.

None yet, anyway, for an overrated, underachieving team.

A season that started with bravado fizzled fast and ended way, way short of expectations in Cleveland.

“We did not meet up to the hype,” right guard Wyatt Teller said. “It just didn’t end up the way we wanted it to, which sucks."

The Browns' inability to finish close games, an offense that was dynamic on paper but didn't deliver or complement the defense, quarterback Baker Mayfield's shoulder injury, wide receiver Odell Beckham's messy breakup and an apparent lack of chemistry inside the locker room contributed to a third-place finish in their division.

No playoffs. No excuses, either.

“There was injuries,” said Pro Bowl left guard Joel Bitonio, the team's longest-tenured player. “There was COVID. There was things that happened this year, but we had the guys to make the playoffs — no matter what.

“We didn’t execute well enough to really do that.”

Before heading into the offseason, Cleveland's players had individual exit meetings Monday with second-year coach Kevin Stefanski to discuss what went went wrong during a season in which the Browns (8-9) lost six games by six points or less.

Afterward, several players shared their reflections of 2021 — and looked forward — during Zoom interviews with reporters.

Mayfield wasn't one of them.

After sitting out Sunday’s 21-16 win over Cincinnati, a battered Mayfield, who is scheduled to undergo shoulder surgery on Jan. 19 to repair a torn labrum suffered in Week 2, chose not to meet with the media to talk about his disjointed, disappointing season.

The team has painted itself into something of a corner by exercising the QB's $18.9 million fifth-year contract option for 2022, and signs point to the Browns keeping Mayfield as their starter.

However, nothing precludes them from looking for a better option via trade or free agency, and the team's reluctance to sign Mayfield to a long-term deal perhaps best illustrates their opinion of him — that they just don't know.

Mayfield tried to play hurt, and in doing so probably hurt the team. However, he still has his share of supporters who believe a healthy Mayfield, who led the Browns to a playoff win last season, is capable of taking them further.

“He battled through this injury like a lot of guys do, and I don’t say that to minimize how he did that,” Stefanski said. “He pushed through it and I know he wants to perform better. I’ve seen him perform better.

“He played winning football for us, so I fully expect him to bounce back next year.”

There's a lot that needs to go better for the Browns, who may have sustained some internal fracturing during a frustrating season.

Rookie linebacker Jeremiah Owusu-Koramoah and safety John Johnson III, one of several new faces on Cleveland's rebuilt defense this season, both spoke of the team's need to be more unified.

Partly due to COVID-19 protocols, it's been challenging for teams to unite, but Johnson said it's something the Browns lacked.

“There’s guys on the team that they’ve probably never even spoke to each other,” he said. “Chemistry is huge, offense and defense and special teams. We need to feed off one another. It’s big and that’s another job that I have to take on and figure it out.

Perhaps stoic to a fault, Stefanski had a rough second season. His play-calling and game planning came under fire, and the team's propensity for penalties was a bad reflection on the AP's Coach of the Year in 2020.

Bitonio, though, was impressed with Stefanski's steadiness.

“I couldn’t tell if we won the Super Bowl with that guy or we missed the playoffs,” Bitonio said. “He’s so even-keeled, and he’s so day to day with his processes and figuring things out that we’re going to be in a good spot.”

Beyond Mayfield, there are other major decisions for the offseason, including whether to re-sign defensive end Jadeveon Clowney, who resurrected his career with Cleveland, and tight end David Njoku.

Clowney finished with nine sacks, his most since 2018. The 28-year-old finished the season healthy, and indicated a willingness to stay with Cleveland — at the right price.

Njoku's fifth season with the Browns was one of his most productive. He finished with 36 catches for 475 yards and four TDs.

“I love it here to the core,” he said. “I honestly want to be here for the rest of my career.”

Mayfield's situation is at the top of the to-do list. While Stefanski doesn't expect any shake-up to his coaching staff, there needs to be a thorough evaluation of his offensive system and whether it best suits the Browns.

Also, Cleveland needs to upgrade its wide receiving corps with Jarvis Landry unlikely to return due to his $15 million contract next season and the lack of a dependable deep threat.