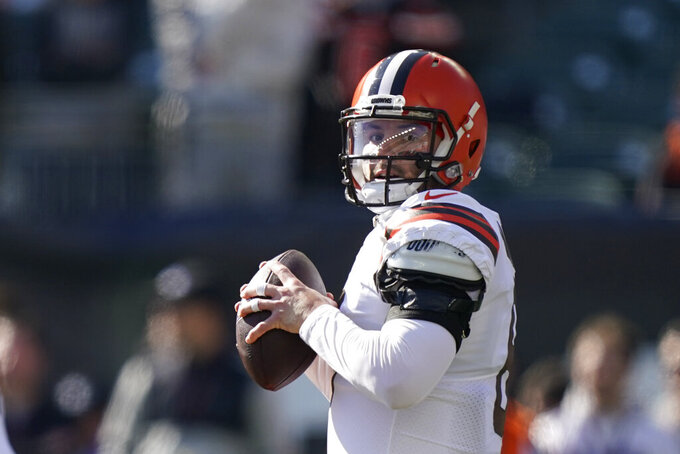 FOXBOROUGH, Mass. (AP) — The Patriots and Browns have waded through differing levels of adversity to make it back above .500.

The Patriots (5-4) have bounced back from a 1-3 start and endured some early growing pains by rookie quarterback Mac Jones to have a three-game win streak that is their longest since Tom Brady’s final season in New England in 2019.

It’s brought both teams into a matchup Sunday that could have a huge impact on which direction they head in over the remainder of the season.

The spotlight will be on how both offenses handle their running games with Browns star Nick Chubb being ruled out following a positive COVID-19 test and the status of Patriots leading rusher Damien Harris also up in the air after he began the week in the concussion protocol.

“We have a resilient group," he said. "Everybody has a role. ... Our guys are bought in to be able to accomplish those roles, the job and whatever they have to do to win the game and help us win. That is just the type of group that we have.”

The Browns rank first in the league in rushing yardage (1,442), average per attempt (5.3 yards) and touchdowns (16). Chubb has been the catalyst, ranking third in the NFL with 721 rushing yards.

Now that he's out, D’Ernest Johnson will start again since Kareem Hunt (calf) isn't ready to come back and is missing his fourth straight game. Johnson ran for a career-best 146 yards and a TD in his first start against Denver on Oct. 21.

“We are extremely confident in D’Ernest. That has not been a question yet," Mayfield said.

Jones has impressed many around the league with the poise he's shown through his first nine NFL games. That list includes Mayfield, who said Jones is playing with the kind of on-field recognition that is “rare to see for a guy of that age.”

Jones has completed at least 70% of his passes in five of his first nine games, the only rookie quarterback to do so. Still, it's the work ethic he's shown to correct his mistakes that's won over the Patriots locker room.

“I think that's what separates the people that really do some special things in this league, because they truly respect football,” receiver Nelson Agholor said. “They respect this opportunity and I think he does that. Every miss or every thing that he doesn't see as his best he takes hard.”

The Browns invested in a proven commodity this week.

Bitonio and Teller are at their best on plays in which they pull — go to the other side of the line — to deliver blocks.

“Wyatt and myself give us the ability to be versatile on offense,” said Bitonio, who was drafted by Cleveland in 2014 and hopes to finish his career with the Browns. “If you have guys who you think are good players, especially in the trenches, you want to try and keep those guys because sometimes, it is hard to find those guys.

With their new deals, Bitonio and Teller are both signed through the 2025 season.

“It’s definitely an honor,” Bitonio said. “It has been cool for both me and Wyatt to get locked up.”

Coming off their strongest performance this season, the Browns’ defense could get an important piece back this week.

Rookie linebacker Jeremiah Owusu-Koramoah is expected to return after missing three games with a high ankle sprain suffered on Oct. 17. The second-round pick from Notre Dame had settled in and was playing well before getting hurt.

It’s been an eventful start to his NFL career for Owusu-Koramoah. He was out with COVID-19 in training camp, needed stitches to close a cut after a weight-room accident and was briefly hospitalized with a throat injury following a game in Los Angeles.

Through it all, he’s persevered.

“Not the ideal rookie season with everything that he’s been through,” said linebacker Anthony Walker Jr. “But he’s a true professional. He comes in every day with the same mindset whether it’s rehab or whatever it is. I think that’s the true testament of a pro.”

The Patriots may have to make an adjustment on special teams this week with punt/kick returner Gunner Olszewski still working his way back from a concussion.

Olszewski earned All-Pro honors last season, averaging 17.3 yards per punt return with a touchdown. That number has dipped to 13.8 this season, but he's remained a factor, breaking free for a handful of long returns to help set up scoring drives.

If he can't go, the primary return duties could fall to receiver Jakobi Meyers, who relieved Olszewski after he sustained his head injury in last week's win over Carolina.