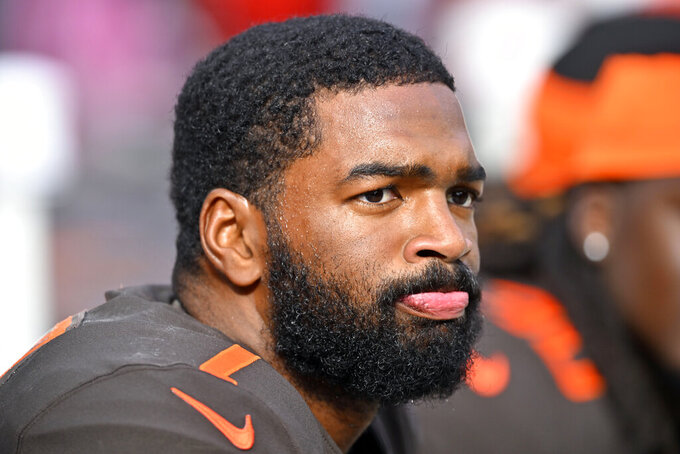 Cleveland Browns quarterback Jacoby Brissett (7) reacts as he sits on the bench after throwing an interception against the Los Angeles Chargers during the second half of an NFL football game, Sunday, Oct. 9, 2022, in Cleveland. The Browns lost 30-28. (AP Photo/David Richard)

CLEVELAND (AP) — Jacoby Brissett looks back fondly on his rookie season with New England, where he was thrust into a starting job, was schooled in the Patriot Way as one of Tom Brady's understudies and won a Super Bowl.

“My welcome to the NFL moment,” he said this week with a laugh.

At least it wasn't his last one.

Brissett may experience some flashbacks Sunday against a New England team with a current QB situation similar to the one it had in 2016 as Belichick brings the Patriots (2-3) in to face the Browns (2-3), whose season seems at a crossroads in Week 6.

After being drafted in the third round by New England, Brissett rocketed up the depth chart and started the season's first two games for Belichick when Brady was suspended by the NFL for the “Deflategate” scandal and Jimmy Garoppolo got hurt.

Although he was only there one season — he got traded to Indianapolis the following year — Brissett remains grateful for the early opportunity to play for arguably the best coach and with the greatest quarterback in NFL history.

“A lot of good memories,” he said. "I got my first start there. Some of the guys there are still on the team, so I know those guys. Obviously, great coached. Good players, good vets, good guys who understand the system that they’ve been running for a while, so yeah, a really good team.”

While reflecting on his time with the Patriots, Brissett couldn't help but notice how his circumstance mirrored what's going on in New England now.

"It brought back a couple of memories, for sure,” he said.

With starter Mac Jones (ankle) and backup Brian Hoyer (concussion) slowed by injuries, Belichick has turned to No. 3 quarterback Bailey Zappe, a fourth-round pick out of Western Kentucky.

Zappe played well in his first start last week, completing 17 of 21 passes for 188 yards with a touchdown and an interception in a 29-0 win over the Detroit Lions.

Jones returned to practice on a limited basis this week, but didn't look very mobile and the Patriots will likely take a cautious approach rather than risk losing him for longer. So Zappe will probably get the call for a second week.

When Brissett was asked to be a pinch-QB for the Patriots six years ago, he came through. Veteran safety Devin McCourty's first recollection of Brissett back then was a raw rookie, but one eager to learn.

“I just think of a hard worker,” said McCourty, in his 13th season with the Pats. "He hung onto every word. Tough and I’ve kept up with him throughout his time (in the NFL). Just to see him have some success and get another opportunity to lead a football team has been cool.

"We know we’ll have our work cut out for us."

The Browns do, too.

It's been a while since Brissett was in New England, and although he's changed, the Patriots remain the same disciplined, no-nonsense team they've always been under Belichick, who began his coaching career in Cleveland.

He may have been a short-timer in New England, but maybe his brief stint gives Brissett a little edge.

“Hopefully it does,” Brissett said. “I have some understanding of the defense. Obviously, it’s been a couple years since I’ve been there. Hopefully it pays off a little bit.”

Belichick's modus operandi is to take away a team's strength. In Cleveland's case, that's the league's top-ranked running game.

Led by star back Nick Chubb, the Browns are averaging 192.4 yards per game and rolling off a 213-yard performance against the Los Angeles Chargers.

A man of few words, Belichick was downright verbose while praising Chubb, whose 593 yards through five games are the most for a Cleveland back since Hall of Famer Jim Brown's 787 in 1963.

“He’s very hard to tackle,” Belichick said. “He’s got tremendous contact balance and playing strength. He’s got good vision and good patience. He really sets up his blocks well. He gets the most out of every block and then he’s very hard to get on the ground.”

Belichick has an opportunity to inch closer to another milestone.

Including the playoffs, he enters Sunday with 323 career victories, one shy of tying “Papa Bear” George Halas for second place all-time. Longtime Miami coach Don Shula is first with 347.

Patriots center David Andrews said the reasons for Belichicks’s win total are infinite, and that priorities are defined for everyone inside the Patriots’ facility.

“The attention to detail. The standard,” Andrews said, “and I think he’s done a great job of that being from the top down. It trickles throughout the coaches and then the players. I think there’s something to be said that nothing can ever be good enough.”

The Browns have been playing something closer to two-hand touch than tackle lately.

Cleveland's rushing defense has been gouged for 440 yards rushing the past two weeks with Atlanta (202) and the Los Angeles Chargers taking turns flattening a unit that has been disappointing through five games.

Coordinator Joe Woods vowed to get his defense mended, and the Browns traded for linebacker Deion Jones following last week's loss to help.

“I promise everybody, we’re trying to do everything we can,” said Woods, who has become a target for disgruntled fans. ”Right now, it’s not going well in terms of the consistency."

“Coach Woods never changes,” he said. “The heat is temporary. When you find a way to fix some of the things we’ve been fixing, it all can turn around.”