Browns-Raiders game pushed by NFL to Monday amid COVID cases 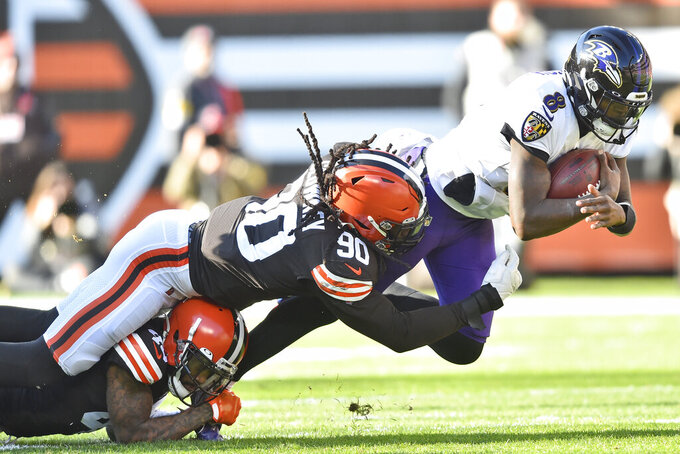 CLEVELAND (AP) — The Browns got a welcomed reprieve on Friday after days of positive COVID-19 tests.

They've been given the weekend to get well.

After insisting Cleveland's game against the Las Vegas Raiders would be played as scheduled Saturday, the NFL postponed it until Monday as the Browns continue to grapple with a virus outbreak.

If the game had not been changed, the Browns were slated to be without coach Kevin Stefanski, quarterback Baker Mayfield, defensive end Jadeveon Clowney and maybe more than a dozen regulars as they try to make the playoffs.

Before the postponement, Clowney joined the team’s massive COVID-19 list after a positive result, a person familiar with the situation told The Associated Press.

Now, the Browns and Raiders, some of whom aren't pleased by the switch, will kick off at 5 p.m. Monday. The move could create enough time for some Cleveland players to return after the league modified some of its policies.

Under the new protocols, an asymptomatic vaccinated player can be activated as soon as one day after testing positive. Previously, a player who tested positive for COVID-19 had to produce two negative tests 24 hours apart before being cleared to return.

The change means the Browns, who have 24 players on the COVID-19 reserve list, could be closer to full strength by Monday for a vital game. However, they could also get more positive cases.

Shortly after the game change was made official, the Browns released a statement saying they respected the league's decision.

“Our team has consistently adhered to the league’s COVID-19 protocols during the past two seasons, and we will continue to operate in a manner that meets and oftentimes exceeds the guidelines dictated by the league and its medical experts,” the Browns said.

The team said every player or coach who has tested positive is vaccinated and is either asymptomatic or experiencing “mild symptoms.”

Cleveland is planning to practice Saturday at its facility in Berea. Stefanski and players are expected to address the media afterward.

On Friday, the Browns were hit with another wave of positive tests and added eight more players to their COVID-19 reserve list. They did get a key defensive piece back as linebacker Anthony Walker Jr. was activated after he missed last weekend's win over Baltimore following a positive test.

Clowney is in his first season with the Browns, whose decision to pair him up front with fellow No. 1 overall pick Myles Garrett, is paying dividends. Clowney had 1 1/2 sacks Sunday against the Ravens.

On Thursday, Stefanski said Clowney missed practice with an illness but tested negative for COVID-19. But he was positive on Friday along with linebackers Mack Wilson Sr. and Tony Fields, according to the person who spoke on condition of anonymity because the team continues to test while abiding by the league’s new protocols.

Clowney will not be added to the COVID-list until Saturday due to a technicality, the person said.

One of the Browns' best playmakers, Hunt was already going to miss the game with an ankle injury.

The league's decision to push back Cleveland's game came as the Raiders were preparing for their flight to Cleveland.

The move will lead to another short week for the Browns, who will visit Green Bay on Christmas.

Before the postponement, the Browns (7-6), who are trying to make the postseason for the second straight year, were facing the prospect of taking the field for an important game with backups and free agents signed in the past few days.

Third-string quarterback Nick Mullens was set to make his first start since last season with San Francisco, and it's possible he may still get the call. With the situation still fluid, the Browns re-signed quarterback Kyle Lauletta, who was with them in training camp.

This week began with the Browns placing eight players, including top receiver Jarvis Landry and two starting offensive linemen, on the COVID-19 list. Stefanski, who missed last season's playoff win at Pittsburgh following a positive test, again tested positive Wednesday, as did Mayfield, two days after he and his wife, Emily, took part in a charity event at a Boys & Girls club.

When Keenum tested positive on Thursday, Mayfield went on Twitter to criticize the league for its handling of the situation.