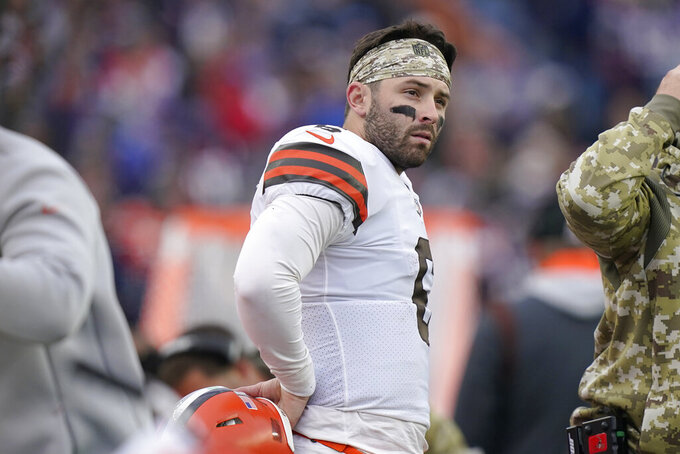 Cleveland Browns quarterback Baker Mayfield (6) watches from the sideline during the second half of an NFL football game against the New England Patriots, Sunday, Nov. 14, 2021, in Foxborough, Mass. (AP Photo/Steven Senne)

BEREA, Ohio (AP) — Nick Chubb returned to the Browns in shorts, sleeveless and raring to run.

Cleveland's star back was activated from the reserve/COVID-19 list on Friday, clearing the way for him to play Sunday when the Browns host the winless Detroit Lions to begin a crucial three-game stretch.

Chubb tested positive for the virus on Nov. 9 and had to miss last weekend's 45-7 loss to the New England. Now that he's healthy, Chubb said he's prepared to carry the ball as often as the Browns need.

“I’m ready for whatever," he said.

Coach Kevin Stefanski also said quarterback Baker Mayfield will start after he sat out one day this week to rest shoulder, foot and knee injuries. On Wednesday, Mayfield said he has never been so “beat up” in his career.

Stefanski said Mayfield has moved better as the week progressed.

The temperature was near freezing and snow flurries were falling Friday as the Browns (5-5) began practicing behind their facility. Chubb, though, was dressed as if it was mid-August at training camp.

“It’s great to have No. 24 back,” said Myles Garrett, the Browns' star defensive end and NFL sacks leader. "He’s the man. One of the best in the league and a great locker room guy. It’s great to see him out here, especially in no sleeves. He doesn’t care about this cold.”

When he spoke to reporters later, Chubb wished he had dressed differently.

Chubb, who is third in the league with 721 yards rushing despite missing three games, was activated along with rookie punt returner/running back Demetric Felton.

Cleveland's offense isn't the same without the 25-year-old Chubb, who rushed for 137 yards and two touchdowns against Cincinnati on Nov. 7 — a 41-16 win that seemed to be a turning point for the Browns as it ended a tumultuous week that included wide receiver Odell Beckham Jr.'s release.

But two days after the Browns blasted the Bengals, Chubb tested positive. His loss compounded issues for Cleveland, especially with dynamic running back Kareem Hunt on injured reserve with a calf issue. He'll miss his fifth game in a row this week.

A two-time Pro Bowler, Chubb didn't show symptoms of the virus and said he only felt poorly for one day. The bigger stress, however, came when he couldn't play as the Patriots embarrassed the Browns.

“Yeah, it was hard to watch for sure," he said. "Seeing my team out there and not having things go our way, it was hard for me to watch. But it’s a new week, a new opportunity. We still have everything ahead of us. We got to come out here, had a great practice and got to keep moving forward.”

After facing the Lions, the Browns visit AFC North-leading Baltimore on Nov. 28. Following their bye week, they play the Ravens (6-3) again on Dec. 12.

"It’s still right there for us,” Garrett said.

The Lions likely will be without starting quarterback Jared Goff, who injured an oblique in last weekend's tie at Pittsburgh. Backup Tim Boyle is in line to make his first career start. He spent two years as Aaron Rodgers' understudy before signing with Detroit.

Goff missed his third straight practice on Friday. Boyle broke his right thumb during the exhibition season, underwent surgery, and was activated from injured reserve.

Garrett was unaware of reports that Boyle will probably be behind center.

“It’s not Goff?" Garrett said when asked what he knee about Boyle. “Not much. I have to do my research. I wasn’t sure if Goff was going to play, so now get to it. Still got a lot of time for film study.”

NOTES: Garrett said he's on good terms with coordinator Joe Woods. Following the loss at New England, Garrett complained the Browns didn't make any adjustments. “I don’t think there was ever like a rift between us,” Garrett said. “There was never a problem. I was frustrated because I felt like we could have done more. He’s got a tough job just like I do.” ... CBs Troy Hill (neck) and A.J. Green (concussion) and WR Anthony Schwartz (concussion) will not play Sunday. ... WR Donovan Peoples-Jones was back and limited after missing Thursday with a groin issue. He's listed as questionable along with DE Takk McKinley (groin).