Bucks have Milwaukee dreaming of first title since '71 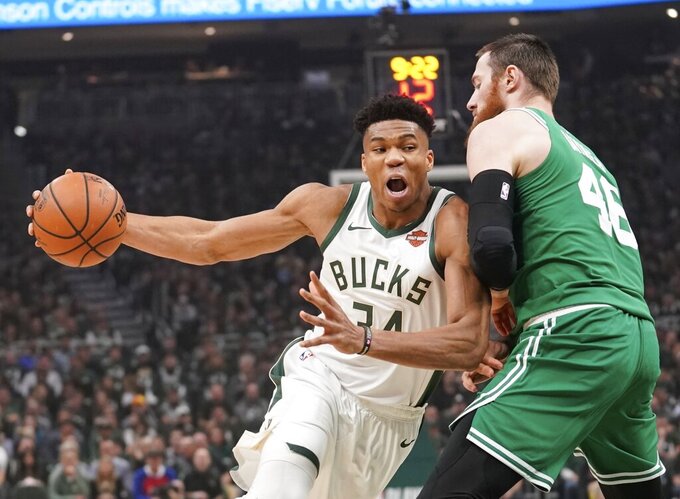 File-This May 8, 2019, file photo shows Milwaukee Bucks' Giannis Antetokounmpo driving past Boston Celtics' Aron Baynes during the first half of Game 5 of a second round NBA basketball playoff series in Milwaukee. Leading the Bucks’ resurgence is MVP candidate Antetokounmpo, a fan favorite and a source of pride for Milwaukee’s Greek community. Antetokounmpo was born in Athens, Greece.“It’s important for the Greek community to be able to gather together as a unit and celebrate him. And he in turn celebrates us,” said Tim Stasinoulias, 61, a Bucks fan since the team came to Milwaukee in 1968.(AP Photo/Morry Gash, File)

Losing season after season made the Bucks almost an afterthought in Wisconsin, where most teams live in the shadow of the Green Bay Packers. But now the Bucks are the hottest ticket in town, with a glittery new arena and a young superstar that has the team knocking on the door of the NBA Finals. Game 1 of the Eastern Conference final against Toronto is Wednesday night.

Trimmel, 37, was among hundreds of fans flocking to the plaza outside Fiserv Forum last week before the Bucks faced Boston in Game 5 of the conference semifinals. The plaza, with plenty of bars and jumbo TV screens for fans who can't get inside, is part of an atmosphere that Trimmel — a Bucks fan since 1992 — said is a new experience.

"I hate to say it but we felt like a minor league team for a while," Trimmel said.

It's a golden era in Milwaukee: The Bucks are in contention just a year after the Brewers came within one game of going to the World Series, shifting the focus of this sports-crazed state from the beloved Packers to two long-neglected teams suddenly on the rise.

The last Wisconsin professional sports team to win it all was the Packers in 2011.

The Bucks' success has been a long time coming. Their only NBA title came in 1971, when a team featuring legends Kareem Abdul-Jabbar and Oscar Robertson beat the Baltimore Bullets.

The Bucks were solid in the 1980s, putting up several 50-win seasons behind stars like Sidney Moncrief, Marques Johnson and Junior Bridgeman before things got brutal in the '90s — six losing seasons, including four where they didn't win more than 30 games.

"There was a generation when they stumbled through the wilderness, and a lot of fans lost interest," said Drew Olson, a longtime Milwaukee sports reporter who now hosts a sports talk radio show on 97.3's The Game. "It was almost to the point that people went to the Bucks games to see the other team."

Olson traced the turnaround to Herb Kohl selling the team in 2014 to Wes Edens and Marc Lasry, two hedge fund managers from New York, and said it paralleled the Selig family's sale of the Brewers to Los Angeles investor Mark Attanasio in 2005.

"In both cases the locals were skeptical whether we should trust these guys — whether they're buying the team to move the team," Olson said. "As it turns out, they've been really good stewards of these franchises."

Leading the Bucks' resurgence is MVP candidate Giannis Antetokounmpo, a fan favorite and a source of pride for Milwaukee's Greek community. Antetokounmpo was born in Athens, Greece. He is just 24.

"It's important for the Greek community to be able to gather together as a unit and celebrate him. And he in turn celebrates us," said Tim Stasinoulias, 61, a Bucks fan since the team came to Milwaukee in 1968.

The Bucks host an annual "Greek Night" event where fans get a Q&A session with Antetokounmpo. Since his arrival in Milwaukee in 2013, Antetokounmpo's been known to sing the Greek national anthem during those events.

"It's a bit of a renaissance in Milwaukee sports, just in general with the success recently of the Brewers and now we have the Bucks," said Stasinoulias. "Who would have thought that the Packers would be third on the totem pole at this point?"

Rather than ranking each team's success, others take another view.

"This is the best Wisconsin sports has ever been as a whole," said Steven Slack, 35, a resident of Sun Prairie who was waiting for the game outside the arena.

"We've never had three teams actually in contention before simultaneously. Because we have, we literally have the MVP in all three leagues," he said, referring to reigning National League MVP Christian Yelich, Antetokounmpo's potential to win it this year, and Aaron Rodgers, the Packers quarterback who has won two MVPs and is in frequent contention.

The Bucks' success is also a financial boon for the city. Each playoff game is estimated to have a $3 million economic impact on downtown businesses — everything from hotels to transportation and food and beverage, according to Visit Milwaukee, an agency that promotes tourism to the city. It only helps that the Bucks are playing in their new half-billion-dollar arena for the first time this year, attracting dedicated and casual fans alike to the restaurants and bars in the plaza outside the stadium. Taxpayers contributed about $250 million to the arena's construction.

Away from the arena, the city has been expressing its pride for the team, too, with buses and streetcars flashing "Fear the Deer" and "Go Bucks" on their digital displays. The city's Public Market has a banner under its name with the same phrase, which is the team's rallying cry. Billboards on the highway are counting down the number of victories needed to win the championship.

Longtime season-ticket holder Rod Johnson, 55, went to games with his father back when tickets cost $5 and the Bucks played in what was called the MECCA Arena. He saw Abdul-Jabbar play and remembers the 1971 championship season. It's been an agonizing wait for another title.

"We're hoping for one more now," he said. "This could be the year."