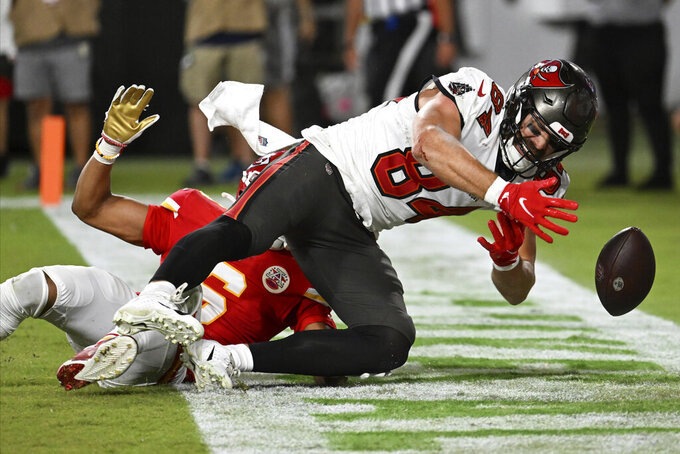 TAMPA, Fla. (AP) — Tampa Bay coach Todd Bowles said tight end Cameron Brate experienced delayed symptoms of a concussion after initially complaining about shoulder discomfort following a collision with a teammate during the first half of the Buccaneers’ 41-31 loss to the Kansas City Chiefs.

Bowles said Monday that Brate was checked out three times before being allowed to re-enter Sunday night’s game with the Bucs driving for a touchdown that trimmed an 18-point deficit to 28-17 just before halftime.

“He went on the sideline. He complained of shoulder discomfort, nothing about his head. He was checked out three times,” Bowles said.

“He said give him a minute. Nothing came up. He went back in until the end of the half,” the coach added. “At halftime, he started having symptoms. Obviously, they were delayed. He started complaining about that. They tested him, and he’s in the (concussion) protocol. We kept him out the rest of the game.”

Brate was shaken up with less than two minutes remaining in the half after catching a pass for a 9-yard gain and colliding with Bucs receiver Chris Godwin while being tackled. He remained on the ground for a few seconds, stood up and began jogging to the sideline under his own power.

Brate, however, failed to get off the field fast enough for Tampa Bay to avoid a penalty for having too many men on the field when Tom Brady took the snap for the next play.

The tight end re-entered the game and was the intended receiver on three incompletions Brady threw while finishing a 75-yard drive that ended with a 1-yard touchdown pass to Mike Evans.

Bowles said an unaffiliated neurotrauma consultant did not ask the Bucs to test Brate for a concussion.

“Nobody called down. He was checked out three times. He went back in until the end of the half. The concussion thing didn’t come up until halftime. He had delayed symptoms,” Bowles repeated.

“It was noticeable hit, but again it was on the shoulder,” the coach added. “Nobody said anything about the head.”

The decision to allow Brate to re-enter the game comes on the heels of Miami’s Tua Tagovailoa being cleared to continue playing after hitting his head on the turf against Buffalo on Sept. 25.

The Dolphins said Tagovaliloa injured his back against the Bills. But four days later, he took another hard hit and suffered a concussion at Cincinnati. The unaffiliated neurotrauma consultant who cleared Tagovailoa from entering concussion protocol has been fired.

Bowles was asked if he was comfortable with the way Brate’s situation was handled on Sunday night.

“Player safety is important for us in this league,” Bowles said. “We’re not trying to play anyone who’s hurt.”