Cardinals take a chance on 'bright mind' of Kingsbury 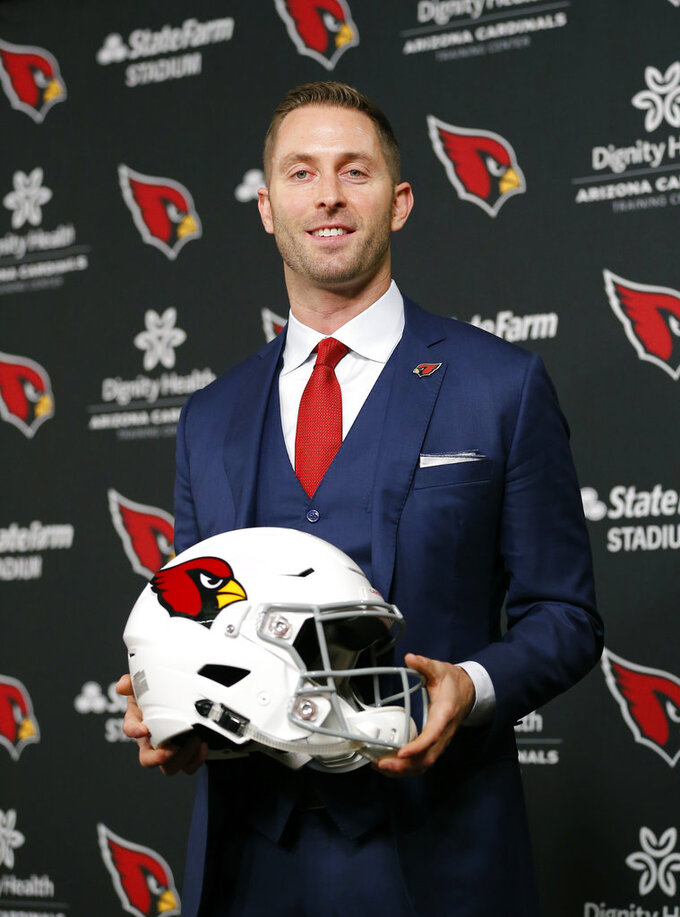 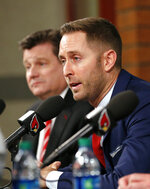 TEMPE, Ariz. (AP) — Arizona Cardinals president Michael Bidwill went outside the traditional boundaries to find his new head coach, identifying Kliff Kingsbury as someone who can ignite the team's moribund offense and mold Josh Rosen into a dynamic NFL quarterback.

Kingsbury, with no NFL coaching experience and a losing record in six seasons at Texas Tech but a history of high-scoring offenses and prolific quarterbacks, was introduced as the Cardinals coach at a news conference at the team's headquarters on Wednesday.

Kingsbury called it "an incredible opportunity."

The reason for the hire, Bidwill made clear, is Kingsbury's record as an innovative offensive coach.

Among those quarterbacks are Patrick Mahomes, Case Keenum, Johnny Manziel and Baker Mayfield, who played at Texas Tech before transferring to Oklahoma.

Kingsbury believes he can incorporate the high-scoring system he had at Texas Tech into the NFL.

"I think that's going to be the exciting part for me," he said. "You watch the trends in the NFL. College football infiltrated that. There's a lot of similar concepts to what we've done on the college level that are being widely used and are really successful in the league right now. ... I do think there are a lot of things we did at Texas Tech that can be successful."

The Cardinals ranked last in the NFL in every major offensive category last season, so Bidwill went after someone who could turn that around.

"The most successful teams in the league are teams that have great offenses, top 10 offenses," he said. "Those are the teams that are in the Super Bowls, win divisions. We wanted to hire a great offensive mind. We wanted to make sure that we hired someone with head coaching experience and weren't particularly concerned if it was at the college or pro level.

Kingsbury was fired after compiling a 35-40 record in six seasons at Texas Tech and, just over a month ago, was hired as offensive coordinator at Southern Cal. When USC wouldn't allow him to talk to NFL teams, Kingsbury resigned and was interviewed by the New York Jets and Cardinals.

"It's been a whirlwind, I can say that," he said. "When I took the job at USC I couldn't be more thrilled to have that job. I thought it was an incredible opportunity with coach (Clay) Helton, Mr. Swann (athletic director Lynn Swann), that program, that tradition. But this is just an opportunity I couldn't pass up."

Kingsbury said his first order of business is building a staff, most significantly finding a defensive coordinator. He said he's "leaned heavily" on Cardinals general manager Steve Keim in that process. Keim said the Cardinals will look to return to the 3-4 defensive scheme that they had in the Bruce Arians years. In its one season under coach Steve Wilks, Arizona switched to a 4-3 scheme and it never seemed to fit the personnel on hand.

"I don't think there's any doubt that a veteran defensive coordinator would be ideal in this situation," Keim said.

Kingsbury said he has "some great candidates" for the job.

"It will be an attacking style," he said. "We want to be aggressive and get this defense back to where it's been previous to last year."

Kingsbury said he's talked to Rosen, who had a difficult rookie season behind an offensive line decimated by injury.

"Josh Rosen is incredibly talented, one of the most talented throwers you'll see," Kingsbury said, "a young player obviously that I'm excited to work with and develop. But as a pure thrower, it's hard to find a guy that throws it better."

He said he wants to "get to know Josh, find out what makes him tick."

"I do think he wants to be a great player in this league," Kingsbury said. "I think he's very competitive. You watch him play this year, some of the shots he took and continued to get up, continued to fight. That says a lot about a young man so I'm excited to develop that relationship."