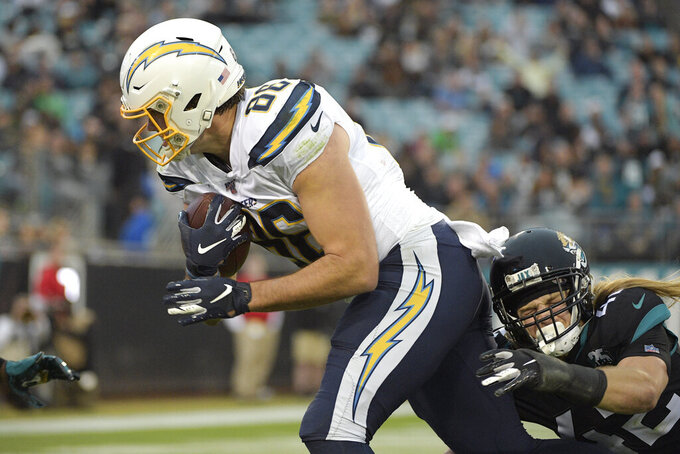 JACKSONVILLE, Fla. (AP) — Los Angeles Chargers receiver Mike Williams celebrated his first touchdown of the season by trying to slam the ball over the crossbar.

He came up short and then got penalized — and yelled at by coach Anthony Lynn.

It was about the only thing the Chargers (5-8) did wrong in a 45-10 victory over the Jacksonville Jaguars on Sunday.

They scored on seven of their first eight possessions, notched season highs for points and yards (525), and were so far out in front that Philip Rivers got the fourth quarter off while Austin Ekeler stayed in to make franchise history.

It was a breakout performance for a team whose offense has been inconsistent all season. It ended a three-game skid and also came on the same day LA was eliminated from the playoffs.

“A little too little, too late in terms of our postseason hopes and the expectations coming into this season,” Rivers said. “But we still talk about finishing strong. Every game matters. ... All around a good day. It was a fun day.”

—Rivers completed 16 of 22 passes for 314 yards and three touchdowns on his 38th birthday. He posted the highest QB rating of his career (154.4) in 221st regular-season start.

—Rivers' 84-yard touchdown to Ekeler beat a blitz and ended up being the longest completion of his 16-year NFL career.

—Rivers now has 2,668 yards passing and 24 touchdowns in nine career starts against the Jaguars. He has 17 TD passes and an interception in his last five against Jacksonville.

“It’s never easy against them," Rivers said. “I know the numbers say otherwise, but it’s always a team effort. ... For the most part, there have been some good memories here, even back to 2002 college season ended here in the Gator Bowl on Jan. 1 against Notre Dame.

"That’s when it started here in the Gator Bowl. We’ve been able to keep it going since then for the most part.”

—Ekeler finished with 213 yards on 12 touches. He had a career-high 101 yards rushing and 112 yards receiving. He became the second Chargers player to top the century mark rushing and receiving in the same game. The other was Lionel “Little Train” James in 1985.

“I thought we could have done this all year, but we were just so inconsistent it put us in a hole too many times,” Ekeler said.

—Williams extended his streak to six games with at least one catch gaining more than 40 yards and found the end zone for the first time this season. It was an odd drought considering Williams had 11 touchdowns (10 receiving, one rushing) last year.

“I knew when I got one, they were going to come in bunches,” Williams said. "So I got my first one kind of late in the season, though. But I’ll get some more.”

—The Chargers were 6 of 8 on third down.

—And the defense allowed 252 yards.

The Chargers' eight losses have all come by seven points or fewer. Being on the wrong end of all those close games kept them out of the playoffs and surely had them breathing easy with this one out of hand early.

“Well, that felt good for a change,” Lynn said. “Not a nail-biter.”