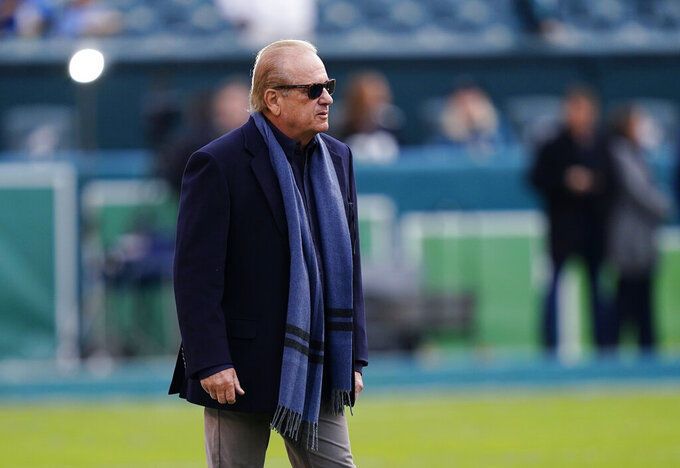 FILE - Los Angeles Chargers controlling owner Dean Spanos walks on the field before the team's NFL football game against the Philadelphia Eagles on Nov. 7, 2021, in Philadelphia. Spanos has been accused of repeated breaches of fiduciary duty and misogynistic behavior in a lawsuit filed by his sister. The filing escalates the ongoing battle among the four Spanos siblings over control of the franchise. (AP Photo/Matt Rourke, File)

LOS ANGELES (AP) — Los Angeles Chargers controlling owner Dean Spanos has been accused of repeated breaches of fiduciary duty and misogynistic behavior in a lawsuit filed by his sister.

The filing escalates the ongoing battle among the four Spanos siblings over control of the franchise.

Dea Spanos Berberian filed a petition Thursday in San Joaquin County Superior Court seeking sole control of the family trust that has a 36% stake in the ownership of the Chargers. The lawsuit also asks the court to suspend and remove Dean Spanos as a co-trustee in the trust and requests the disqualification of Michael Spanos as successor co-trustee.

Dean Spanos, Michael Spanos and Alexis Spanos Ruhl issued a statement saying they are united in continuing ownership of the team.

“It is unfortunate that our sister Dea, who clearly has no interest in continuing to participate in the family’s businesses, has resorted to leveling false and provocative charges in an attempt to impose her will on the rest of the family," the statement said. "The three of us and our children, representing more than 75% of the family and its ownership of its businesses, stand united in support of our parents’ and grandparents’ wishes, including as to the continued ownership and operation of the Chargers.”

Dean Spanos and Berberian were left as co-trustees of the trust following the deaths of Alex and Faye Spanos in 2018.

Of the remaining 64% of the Chargers ownership stake, Dean Spanos, Berberian, Alexis Spanos Ruhl and Michael Spanos each own 15%. The remaining 4% is owned by non-family members.

Alex Spanos bought the San Diego Chargers in 1984 and Dean Spanos took over managing the franchise in 1994.

In the filing, Berberian accuses Michael and Dean Spanos of repeatedly acting “out of their deeply-held misogynistic attitudes and sense of entitlement as the men in the family.” It states that Dean and Michael “believe to their cores that, regardless of what their parents intended and their wills specified, men are in charge and women should shut up."

Spanos Ruhl issued a separate statement saying the allegations by her sister are untrue.

“Throughout this entire ordeal that was instigated without justification by my sister Dea Berberian, my brother Dean has been unfailingly respectful of me and of my wishes. And he has been fighting, along with my brother Michael and me, to fulfill the wishes of our mother, Faye, relating to our family and our businesses,” she said. “To characterize Dean as somehow being less than fully respectful of the women in our family is just not right.”

According to the trust’s financial statements, debts totaled over $358 million as of Dec. 31, with debt service and expenses of at least $11 million per year. The trust’s stake in the Chargers makes up 83% of its holdings.

Forbes valued the Chargers at $2.6 billion in its recent franchise rankings. The trust’s share could be worth nearly $988 million.

Berberian has also accused Dean and Michael Spanos of borrowing over $60 million from the trust to buy an airplane and “deliberately” damaging her relationship with the pastor of her Greek Orthodox church.

Berberian filed a petition last March in Los Angeles County Superior Court seeking to have the court put the trust and team’s ownership stake up for sale. Berberian agreed earlier this week to have the matter heard before the NFL in arbitration.