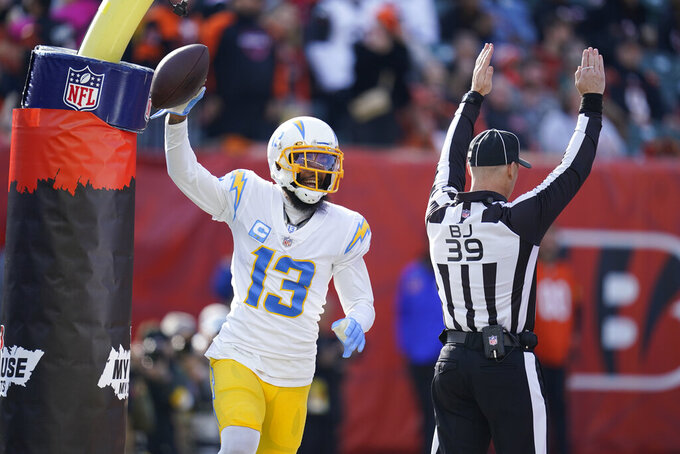 Los Angeles Chargers' Keenan Allen (13) reacts after a touchdown reception during the first half of an NFL football game against the Cincinnati Bengals, Sunday, Dec. 5, 2021, in Cincinnati. (AP Photo/Michael Conroy)

Coach Brandon Staley said that Allen's status "is day to day right now, and hopefully we’ll have some good news on him in the next few days.”

The Chargers (7-5) — who are in possession of the AFC's second wild-card spot — host the New York Giants this week before a key matchup against the Kansas City Chiefs on Dec. 16.

Allen had five receptions for 34 yards and two touchdowns in Sunday's 41-22 victory over the Cincinnati Bengals. He also threw a pass to Justin Herbert for a 2-point conversion during the first half.

If Allen is vaccinated, he could return to practice if he remains symptom free and has two negative tests at least 24 hours apart. He is tied for second in the league with 86 receptions and is 71 yards away from his fourth 1,000 yard season in the past five years.

The Chargers have had a recent run of COVID-19 cases. Defensive tackle Linval Joseph remains in league protocols while defensive lineman Jerry Tillery, Christian Covington and linebacker Drue Tranquill missed at least 10 days last month. Linebacker Joey Bosa sat out five days and tested negative leading up to the Nov. 21 game against Pittsburgh because he was an unvaccinated close contact.