Chiefs' Harrison Butker coming through in clutch once again 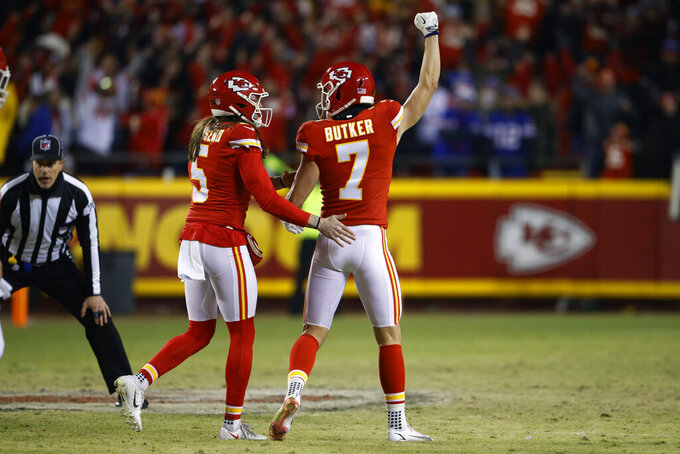 KANSAS CITY, Mo. (AP) — After three divisional playoff games had been decided on last-second field goals, Chiefs kicker Harrison Butker had to know that fate was probably going to send him onto the field for a pressure-laden try against Buffalo on Sunday night.

Even when the Chiefs were far from within range and there were 13 seconds left on the clock.

So rather than stand and watch Patrick Mahomes calmly hit Tyreek Hill for a 19-yard gain, and Travis Kelce from 25 more, Butker retreated to the solitude of the sideline kicking net. He went through his normal routine, visualizing every movement before taking the field, and was ready when those two long pass plays gave him an opportunity.

The rest went down in playoff history: Butker split the uprights from 49 yards as time expired to send the game to overtime, and Mahomes and Co. took care of the rest, marching for the decisive touchdown in a wild 42-36 victory.

“As a kicker, I try to be ready for every moment,” Butker said, “whether that's the first series, an extra point, the last series, a game-tying kick to go to overtime. I have to prepare every series like I'm going to have a big kick, and if we have the ball, I have to be ready to go. And when you have 13 seconds, you're going to need to be ready in a hurry.”

Butker's stone-cold kick on a chilly night at Arrowhead Stadium has been overshadowed by the back-and-forth drama of Mahomes and Buffalo counterpart Josh Allen, who might as well have been playing H-O-R-S-E the way they were going at it.

And that 50-yarder came from nearly the exact same spot on the field as his kick to force overtime.

“You know, I think it was actually a blessing,” he said. “When you have a missed kick, you're able to think about what you need to change, what you need to adjust. The 50-yard, left-hash kick, I adjusted my aiming point too much, deviated from a game plan I had in the warm-up. After that I kind of kicked myself in the butt and said, ‘Stay with what you did in the warm-up.’ I took what I could from the miss and that helped me with the 49-yard, left-hash, same-direction kick."

The two misses notwithstanding, Butker has been nearly perfect for Kansas City all season. He missed just two PATs on 49 tries, and he was 25 of 28 on field-goal attempts, good for one of the best percentages in the NFL.

He's currently third in career field-goal percentage behind only the Ravens' Justin Tucker.

Those numbers, along with his clutch performance Sunday night, are why the Chiefs signed Butker to a five-year, $20.275 million contract after his 2018 rookie season, making him one of the league's highest-paid kickers.

“He's done so well for the years that he's been here,” Chiefs coach Andy Reid said. “Every once in a while, you're going to have a clunker or two, whether that's the snap, the hold the kick; there are a lot of things that go into it. But we have the ultimate trust in him coming back, and we showed it, coming right back to him.”

Butker had been in a nearly identical position his rookie season, when the Chiefs faced the Patriots in the AFC title game. On that night, the Chiefs had 32 seconds rather than a mere 13 to give Butker a chance at a field goal to force overtime, though New England won the coin toss and ultimately scored the winning touchdown to reach the Super Bowl.

“You have to have that belief,” Mahomes said, “and if you're not going to go down fighting, then you don't deserve to be here. We knew that if we could just give ourselves a chance to get in Butker's field-goal range, he was going to knock it in.”

The 26-year-old Butker padded his franchise playoff scoring record, which now stands at 83 points — 14 field goals and 41 PATs in 11 career games. And given his age and effectiveness, he probably won't be done any time soon.

“This definitely has a feel from 2019,” Butker said of the Chiefs' title season. “We have a lot of special guys, everyone is playing super loose. I don't think there's a lot of fear or doubt in anybody. The chemistry is great. I think we've faced a lot of adversity throughout the season, the losses and close-game losses, and even throughout the playoffs, I think all those different challenges we've faced and overcome is important to making a championship-caliber team.”