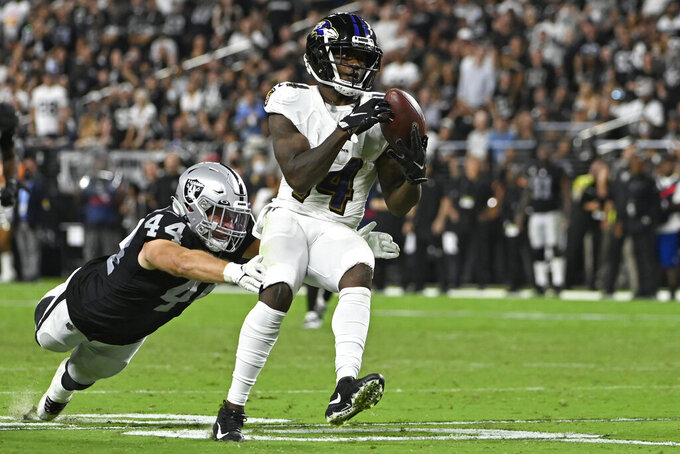 OPENING LINE: Chiefs by 1, according to FanDuel SportsBook

TURNOVER DIFFERENTIAL: Chiefs plus-2, Ravens minus-1

CHIEFS PLAYER TO WATCH: FS Tyrann Mathieu was cleared of COVID-19 the day before the opener, but he did not play. He'd tested positive Sept. 1. Mathieu is expected back this weekend, and Kansas City's defense can use the help after allowing 457 yards in last week's win.

RAVENS PLAYER TO WATCH: WR Sammy Watkins, who was with the Chiefs last season, caught four passes for 96 yards for Baltimore in his first game with the Ravens.

KEY MATCHUP: Chiefs QB Patrick Mahomes vs. Ravens QB Lamar Jackson. All eyes will be on these two former MVPs when they square off for a fourth straight season. Both teams had their issues defensively in Week 1, so there will be pressure on the quarterbacks to produce points as often as possible. Jackson may need to be at his absolute best for the injury-filled Ravens to have a successful season.

KEY INJURIES: The Chiefs are relatively healthy. The Ravens haven't been for a while. Baltimore lost RBs J.K. Dobbins and Gus Edwards to knee injuries before the season started. CB Marcus Peters also went down for the year with a knee injury. ... The Ravens have been without rookie WR Rashod Bateman because of groin problems, and WR Marquise Brown missed practice time this week because of ankle issues.

SERIES NOTES: Kansas City has beaten the Ravens in each of the past three seasons and has won four in a row overall in the series. ... Mahomes has thrown for 377, 374 and 385 yards in the past three meetings for the Chiefs. ... Jackson is 30-8 as a starter in the regular season — but is 0-3 against the Chiefs.

STATS AND STUFF: Mahomes is 11-0 in September as a starter, and he's thrown for 35 TDs with no INTs in those games. ... Chiefs WR Tyreek Hill had 11 catches for 197 yards and a TD last week, the most yards receiving in the league. ... Kansas City TE Travis Kelce caught two TD passes in Week 1 and now has a TD reception in five straight games. He became the fifth-fastest TE in league history to reach 50 TD catches, doing it in 112 games. ... The Chiefs have won a franchise-record 11 straight regular-season road games. ... Baltimore lost its season opener for the first time since 2015, and that was also the last time the Ravens started 0-2. ... The Ravens ranked No. 1 in the NFL in rushing each of the past two seasons, and they are in that spot again after one game this year despite the loss of Dobbins and Edwards. Jackson rushed for 86 yards in the opener. ... Baltimore rookie Odafe Oweh had a sack in his NFL debut against Las Vegas. ... Ravens LB Justin Houston needs 2 1/2 sacks to reach 100 for his career.

FANTASY TIP: Baltimore had problems covering Las Vegas TE Darren Waller, who had 10 catches for 105 yards. If that happens again it could mean a big game for Kelce.