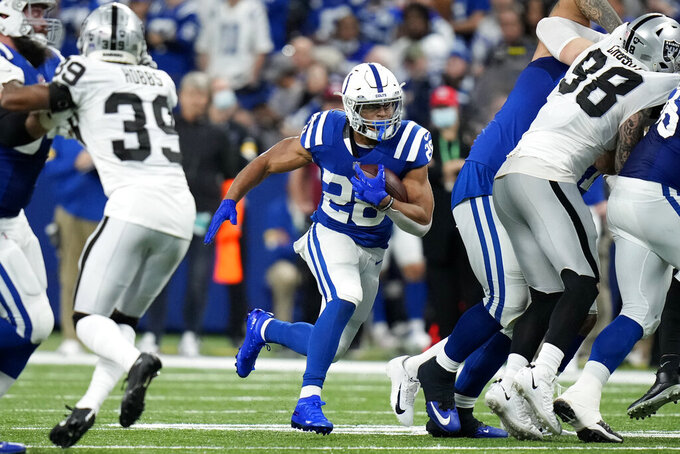 Indianapolis Colts running back Jonathan Taylor (28) carries the ball up field during the second half of an NFL football game against the Las Vegas Raiders, Sunday, Jan. 2, 2022, in Indianapolis. (AP Photo/AJ Mast)

OPENING LINE: Colts by 15 1/2, according to FanDuel SportsBook.

TURNOVER DIFFERENTIAL: Colts plus-16; Jaguars minus-22.

COLTS PLAYER TO WATCH: Darius Leonard. The passionate, playmaking linebacker has been a turnover and tackling machine throughout his career. But he wasn’t happy with how the Colts practiced last week or how they played Sunday. To avoid a repeat, Leonard will likely set the tone early and anticipates having a productive day.

JAGUARS PLAYER TO WATCH: WR Laquon Treadwell has at least 50 yards receiving in six consecutive games, the third-longest active streak in the NFL behind Cooper Kupp (Rams) and Mark Andrews (Ravens). Treadwell has a career-high 410 yards and needs six receptions to set his single-season high.

KEY MATCHUP: Jacksonville’s shaky run defense against one of the league’s leading ground attacks. The Jaguars have fallen to 25th in the league against the run, giving up more than 127 yards a game. NFL rushing leader Jonathan Taylor ran 21 times for 116 yards and a touchdown in the teams’ first meeting. Taylor has topped 100 yards seven times in his last eight games.

SERIES NOTES: The Colts have won two straight in the series but have lost five in a row in Jacksonville and once in London. Indy’s last win in Jacksonville came in 2014. ... Indy has six season sweeps since the teams became division foes in 2002 and is seeking its first since 2014. ... The Colts’ win in last year’s regular-season finale clinched a playoff berth and secured Jacksonville the No. 1 overall draft pick.

STATS AND STUFF: Indianapolis can earn its third playoff spot in four years with a win and needed wins in the regular-season finale each of the previous two times it made the postseason. ... Indy has won eight of its last 11 after starting 1-4. ... One year after throwing a career-high 15 interceptions, Carson Wentz has thrown six. His career low is seven. With one more TD pass, Wentz will tie his second-highest single-season total (27). ... Taylor has run for a franchise record 1,734 yards and has a 529-yard lead in the NFL’s rushing title chase. ... If Taylor rushes for 100 yards and scores a TD on Sunday, he will break Edgerrin James’ franchise record for most 100-yard games in a season (10) and Lenny Moore’s single-season mark for total TDs scored (20). ... Kenny Moore II needs nine tackles to become Indy’s first CB with 100 tackles in a season since 1984. ... The Colts need one 30-point game to match the 2007 team (eight) for No. 2 on the franchise’s single-season list. ... Indy is tied with Dallas for the league’s most takeaways (33) while leading the league in fumble recoveries (14) and points off turnovers (122). … The Jaguars can clinch the No. 1 draft pick for the second straight season with a loss. … Jaguars fans are organizing a “Klown out” for the finale, in which hundreds or maybe thousands of disgruntled regulars are planning to wear clown attire to the game in hopes of persuading owner Shad Khan to fire general manager Trent Baalke, whose draft picks have been underwhelming and his free-agent class less than impactful. Baalke also has a reputation for failing to get along with coaches.