Colts, Lions get physical on 1st day of joint practices 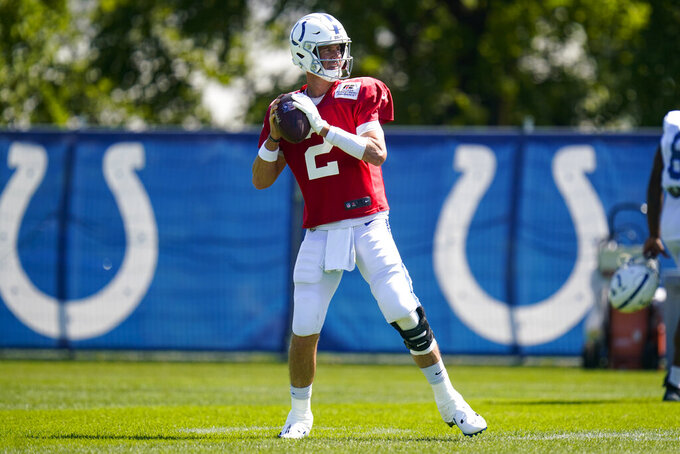 He welcomed the spirited play, the uptick in intensity, even the chippiness and verbal sparring. Lions quarterback Jared Goff just appreciated working against a different defense — once he settled in.

It was a good start to a long, busy week for two teams that will hold another workout in suburban Indianapolis on Thursday before playing a preseason game Saturday.

But the large crowd didn’t drive to Indy’s training camp site, nestled among the state's famous cornfields, just to watch practice. They wanted to see dust-ups and the Lions and Colts obliged.

The first occurred about an hour into the workout when an Indianapolis player was shoved out of bounds and into his teammates on a punt return. It resulted in some minor pushing and shoving and it drew a flag from the officials.

About 15 minutes later, Colts receiver Michael Pittman Jr. took offense to Lions cornerback Jeff Okudah throwing him to the ground at the end of a play. Pittman, who has mixed it up with his own teammates, responded with a push as the argument continued down the field.

Eventually, Taylor and three-time All-Pro guard Quenton Nelson broke it up as players from both teams gathered round.

Reich generally disapproves of the skirmishes though he was pleased to see no escalation. Players from both teams anticipated there could be some fisticuffs this week. Goff thinks there could be more Thursday.

"It’s fun. It’s chippy at times, but you want to compete,” he said. “If you’re not going to play in a game this is the next best thing we're going to get and in some cases it's even better because there's limited risk of injury, right? You can control it and do as you want.”

Neither team came away from Day 1 unscathed, though.

Colts tight end Drew Ogletree suffered a non-contact injury to his right knee about halfway through practice. He needed help leaving the field and Reich told reporters the injury appeared to be “significant.” The rookie had played well enough in camp to hold the No. 3 spot on the depth chart.

Lions tight end Devin Funchess also left early with what appeared to be a right shoulder or arm injury. The former Michigan star put himself in the mix following a strong performance Friday against Atlanta. Funchess has played in only one game in the past three seasons — the 2019 opener with the Colts.

Still, it was the kind of change both teams needed after three monotonous weeks of training camp.

“It’s high intensity, the coaches preach that going against another team so everyone’s bringing the juice,” Lions rookie linebacker Malcolm Rodriguez said. “I feel like guys today had that juice.”

The environment helped, too.

Music blared for nearly two hours as the stands stretching the length of almost two football fields were near its 7,000-seat capacity. Colts owner Jim Irsay also attended practice, telling reporters he remained hopeful of getting a contract extension with Nelson.

Even Indy’s costumed “Super Fan” showed up in full garb.

And, of course, HBO’s “Hard Knocks” crew captured it all on film. The program that profiled Indianapolis in last year's first in-season edition is now tracking the Lions and coach Dan Campbell for their traditional training camp series.

Nobody minded. In fact, Ryan and the Colts looked as sharp Wednesday as they have all summer.

“It’s part of football,” Colts receiver Ashton Dulin said after making several contested catches, including one in the end zone. “It gets a little hectic sometimes you have to react to it. You've got to just keep your cool, keep your head up. That's what it was, keep playing football."