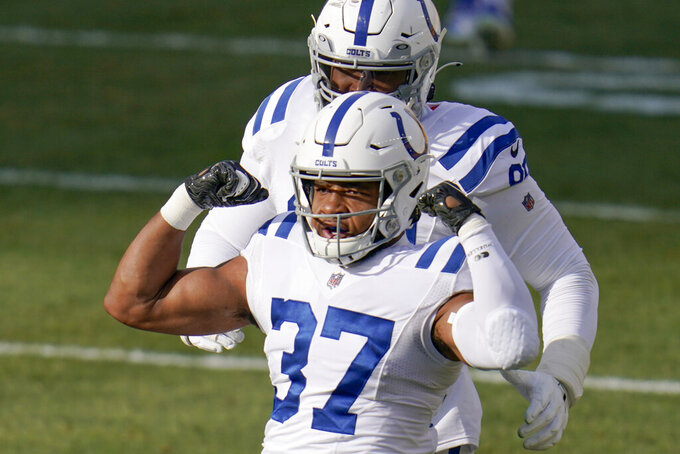 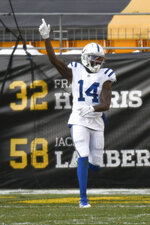 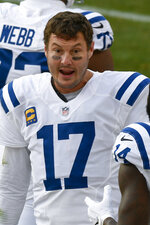 And just like that, the momentum vanished. Indianapolis hopes its playoff chances didn't disappear right along with it. Their stunning 28-24 loss to Pittsburgh left just about everything on the table for the Colts (10-5) heading into Week 17.

“When we had everything to play for, we just didn’t have all the answers in the second half of a game we had to have,” Indianapolis coach Frank Reich said. "I’m not doubting the coaches or the players. We had a bad game, a bad half and we weren’t able to finish it off. We’ve got to learn from it, get better next week and get some help.”

The result — the Colts' seventh straight loss to Pittsburgh — seemed improbable for long stretches. Despite missing both starting tackles, Indianapolis spent the better part of the afternoon pushing the AFC North champions around. Taylor ran basically untouched from 6 yards in the first quarter to give the Colts an early lead. He shook off four defenders to do the same on a 1-yard plunge in the second.

Pittsburgh's safeties crept closer to the line to help out and Rivers made them pay by delivering a beautiful 42-yard touchdown to Zach Pascal that put Indianapolis up 21-7 late in the first half. Rodrigo Blankenship's 28-yard field goal early in the second half boosted the lead to 17. And when the defense turned the Steelers aside on four shots from inside the Colts 5, it appeared Indianapolis had things well in hand.

Not so much. The secondary started getting sloppy. Three penalties — two for pass interference, another for illegal contact — helped the Steelers get down the field quickly. Taylor became a non-actor, making just two of his game-high 18 carries over the Colts' final five drives. And Rivers failed to generate much of anything during Pittsburgh's rally.

Indianapolis gained just one first down during a four-possession stretch while the Steelers ripped off three straight touchdowns to surge in front. The Colts' last two drives ended with Pittsburgh's Mike Hilton picking off Rivers' heave deep down the sideline, and Rivers throwing high and wide on fourth down with 1:14 to play.

"We lost the football game because we didn’t execute well enough on either side of the ball,” said Rivers, who completed 22 of 35 passes for 270 yards with a touchdown and an interception. “I’m not pointing fingers at our defense because I think they’d say the same thing. We gave them (the Steelers) life. We’ve been on the other side of those. They were the aggressor as it got to be a 10-point game, a 3-point game and I don’t mean that from a play-calling standpoint, it just had that feel like ‘Oh boy,’ and we were trying to hang on.”

They couldn't. While victories elsewhere by Miami and Baltimore would have prevented the Colts from locking up the franchise's second playoff berth since 2014 even with a win, the path now gets considerably more perilous. Indianapolis likely needs to beat Jacksonville (1-14) in the regular-season finale and hope for a little bit of luck elsewhere. It's a spot that seemed unimaginable after two-plus quarters of near-flawless play against a team that hadn't won in nearly a month.

"Going into the game, I think we could control our own destiny with a win today and I think everyone thought in the first half it was a sure thing, and I think we just took our foot off the gas,” center Ryan Kelly said. “This will sting for a little while and have to come back and get a redemption game against Jacksonville.”

A weird season that's seen the Colts careen from contenders to also-rans and back again now comes down to one game. At times they've looked like one of the best teams in the AFC. At times, they look like playoff imposters. Against the Steelers, they managed to cram both looks into the same game.

“All we can do is take care of our business,” Reich said. “And that means learning from this film ... and then finishing up the regular season with a great performance.”