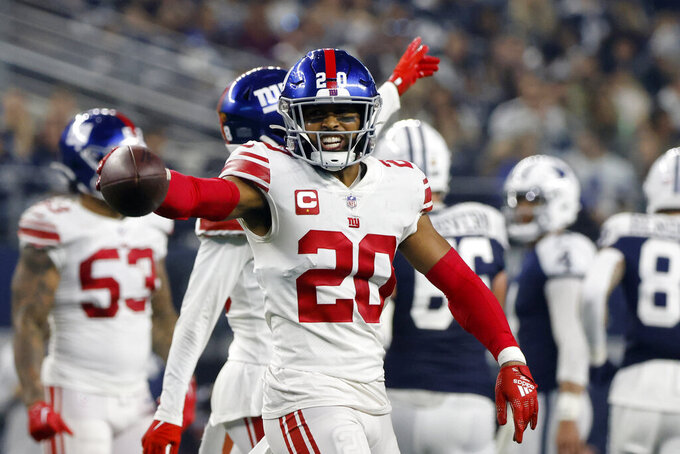 New York Giants safety Julian Love (20) celebrates after intercepting a pass against the Dallas Cowboys during the first half of an NFL football game Thursday, Nov. 24, 2022, in Arlington, Texas. (AP Photo/Michael Ainsworth)

EAST RUTHERFORD, N.J. (AP) — The Washington Commanders and the New York Giants have been mirroring each other for years.

Neither of the NFC East bottom-feeders has had a winning season since 2016, although the Commanders — known at the time as the Washington Football Team — won the division in the 2020 pandemic season with a 7-9 record. The Giants (6-10) were second.

Over the years, both teams have had high draft picks and left their fans frustrated more often than not.

The unexpected has happened this season. The Commanders (7-5) and Giants (7-4) are in the playoff hunt as the season heads into the home stretch. They will play twice in the next three weeks, starting Sunday at MetLife Stadium.

“I always say that the games in December matter most,” said left tackle Andrew Thomas, the Giants' first-round pick in 2020. “Two division opponents with a winning record, you can’t ask for any better. We’re excited for it. Washington’s going to be prepared, so I’m looking forward to it.”

The Commanders are on a roll, especially since quarterback Taylor Heinicke replaced an injured Carson Wentz on Oct. 23 against Green Bay. They have won three straight and six of seven.

“When you get to this time of the year and you’re in the playoff hunt, every game’s really exciting,” said Heinicke, who is 5-1 as the starter. “It means something. I’ve been on the other end. I wasn’t playing at the time, but I’ve been in locker rooms where you get to this part of the season, you’re already out of the playoffs and it’s not fun.”

The Giants, who last made the playoffs in 2016, and the Commanders both control their postseason destinies. They seemingly are playing for wild-card spots along with NFC East rival Dallas (8-3). Philadelphia (10-1) leads the division.

No division has had all four teams make the playoffs.

The Giants' running game has bogged down in recent weeks, being held under 90 yards in each of New York's three losses during its past four games.

While Saquon Barkley (992 yards) is closing in on his first 1,000-yard rushing season since 2019, the key might be quarterback Daniel Jones. The fourth-year player has cut back on his rushing the past month and it has hurt the running game. Expect him to test the wheels more.

After running for 20 times for 61 yards in his first five starts this season, Heinicke did not have a rushing attempt last week against Atlanta. Coach Ron Rivera sees it as a sign of maturity, but Heinicke has not given up his willingness to extend plays with his legs and take off to gain yards when necessary.

STANDING ON A CORNER

The Giants have had too many cornerbacks get hurt this season.

After cutting top cornerback James Bradberry (Eagles) in a salary-cap move, New York went into the season with Adoree Jackson and Aaron Robinson as the starters.

Robinson was lost for the season in early October to a knee injury. Free agent Fabian Moreau replaced him at right cornerback on Oct. 9 until sustaining an oblique injury in November in the same game Jackson hurt a knee. Rookie Cor'Dale Flott and Nick McCloud started on Thanksgiving. Flott suffered a concussion.

Moreau has a chance to return this week, but second-year pro Rodarius Williams, who had an interception against Dallas, might start.

Washington’s offensive line has had plenty of changes this season, outside of Charles Leno at left tackle. The churn is expected to continue Sunday. Sam Cosmi and Cornelius Lucas have been rotating at right tackle, but Cosmi is set to replace injured starter Trai Turner at right guard.

“I’m excited about the opportunity to play guard,” Cosmi said. “I’ve never really done it other than one practice here. ... Just trying something new and got that opportunity here.”

Linemen have gotten increasingly excited about offensive coordinator Scott Turner’s reliance on the run. Don’t expect that to change any time soon, since the Commanders have two effective lead backs in rookie Brian Robinson Jr. and Antonio Gibson and have been using third-stringer Jonathan Williams and receiver Curtis Samuel situationally, too.

The Giants have the NFL’s toughest remaining schedule (.688 opponent win percentage), followed by Chicago (.625) and Washington (.600).