Cowboys back in playoffs with older, wiser Prescott, Elliott 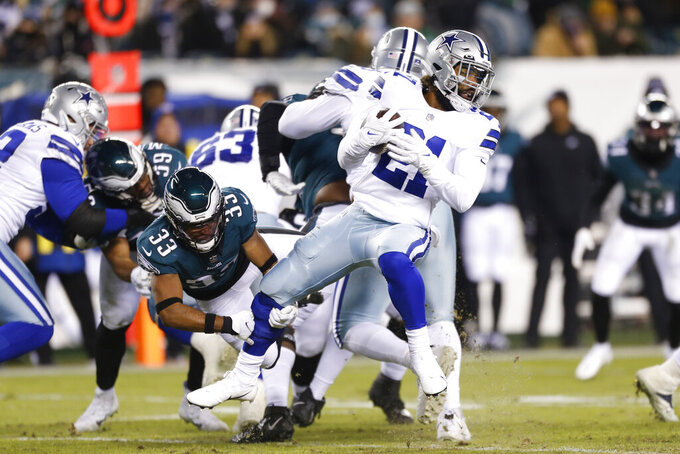 Dak Prescott and Ezekiel Elliott soared to the top of the NFC as twin rookie stars for the Dallas Cowboys five years ago.

It's not so much that the quarterback and running back didn't appreciate the moment and the opportunity, and there are better reasons to explain why Green Bay beat Dallas in their playoff debut (Aaron Rodgers would be a good place to start).

Age and experience, though, have a way of helping players understand the time is now. Prescott and Elliott are good examples as Dallas (12-5) heads into a home wild-card game against San Francisco (10-7) on Sunday.

“Age and experience is a constant reminder of how damn hard it is to win in this league,” coach Mike McCarthy said. “I think you experience it every single week. It’s hard to win one game. And now the tournament starts.”

Since winning NFL Offensive Rookie of the Year, Prescott has missed the playoffs twice when healthy and made it back once, getting his first postseason win before a divisional-round loss to the Los Angeles Rams during the 2018 season.

Get him started talking about appreciating the opportunity, and it won't take Prescott long to bring up the gruesome compound fracture of his right ankle that ended his 2020 season in Week 5.

Fifteen months later, he has a chance for his second playoff victory as the Cowboys try to reach the NFC championship for the first time since the last of the storied franchise's five Super Bowl titles 26 years ago.

“Being older now, being six years into this and as I said, really just going back to not making the playoffs the years that we didn’t and being hurt last year, that alone is enough that I don’t take any moment for granted,” Prescott said. “I think more than anything it’s about sharing it to the young guys and the other guys that may not have been through the things I’ve been through or been in the league as long, make sure they understand it’s a ‘now’ mentality.”

Elliott's six-game suspension over domestic violence allegations played a significant role in the Cowboys missing the playoffs in his second year with Prescott. Unlike his backfield mate, the two-time rushing champion endured all of last season, when McCarthy's Dallas debut was ruined by Prescott's injury and a poor defense.

This season, Elliott has played through a knee injury sustained in Week 3, never missing a game but also going without a 100-yard showing since the fifth game.

Without the first 17-game regular season, Elliott would have finished with a career low in yards rushing. Instead, he ran for 87 in a 56-21 victory over Philadelphia, getting a hug from McCarthy when he came to the sideline after the carry that gave him 1,002 yards for the season.

“I think it shows you who Zeke is, not only as a player, but a person,” McCarthy said of the running back who essentially refused to sit. “Look at the way he’s ingrained in the locker room. Yeah, he was not going to miss a game. That’s just the way he’s wired. And he does so much more for us than just run the football. We’ve always recognized that.”

Elliott has missed one game because of injury in his career. His 1,650 carries since entering the league are one shy of 250 more than the No. 2 running back on that list, Derrick Henry, who was drafted the same year.

Elliott (7,386 yards) and Henry (6,797) are the only two backs with more than 6,000 yards in those six seasons. Elliott kept playing to try to get back to this stage, where he has averaged 103 yards with two touchdowns in three playoff games.

“You don’t know, tomorrow could be any of our last days playing,” Elliott said. “You don’t know how many more you’re going to get, especially with a team like this. We just got to take advantage of this opportunity and make the most of it.”

Prescott carries more than the weight of Dallas' postseason history from the past quarter-century. This is his first playoff game since signing the richest contract in club history this past offseason, $160 million over four years. (Elliott got his $90 million extension two years earlier.)

McCarthy took Green Bay to four NFC championship games in 12-plus seasons there, so he's experienced the formula that has eluded the Cowboys for so long. The coach believes that success starts with the quarterback.

“I think it’s hard not to talk about him without recognizing his leadership ability,” McCarthy said. “He asked me the other day, he says, ‘What do you need from me?’ And I said, ‘I need you to keep being exactly how you are.’”

In many ways, it's the same Prescott — and Elliott — from six years ago. In others, they're quite different.

NOTES: LB Keanu Neal has been ruled out against the 49ers with chest and elbow injuries. ... RB Tony Pollard (foot), S Jayron Kearse (hamstring), LT Tyron Smith (knee/ankle) and TE Sean McKeon (neck) don't have injury designations, meaning they should play. ... Smith, Kearse, LB Micah Parsons and CB Anthony Brown were activated from the COVID-19 list this week after being out against the Eagles.