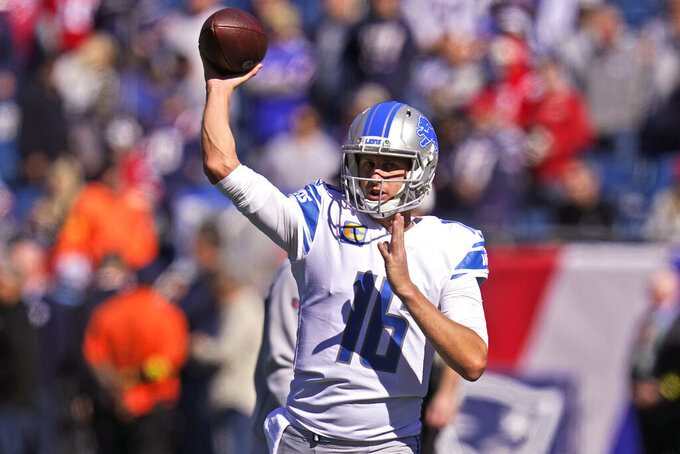 Detroit Lions quarterback Jared Goff (16) warms up on the field prior to an NFL football game against the New England Patriots, Sunday, Oct. 9, 2022, in Foxborough, Mass. (AP Photo/Charles Krupa)

ARLINGTON, Texas (AP) — Dak Prescott is back and will try to get the Dallas offense playing a little closer to the level of a stout defense that has lifted the Cowboys to a winning record.

Jared Goff and the Detroit Lions moved the ball fine early in the season. They just don't have a lot of victories to show for it.

Prescott is set to return at quarterback Sunday against the Lions (1-4) after missing five games with a fractured right thumb, an injury to his throwing hand sustained in a season-opening loss to Tampa Bay.

Cooper Rush won the first four starts filling in for Prescott before the defending NFC East champs lost to undefeated Philadelphia 26-17 with first place in the division on the line.

The Cowboys (4-2) are third in the division — but one of four NFC teams with winning records. The Lions are one of two one-win teams in the NFC.

“I think it’s kind of weird to come off a loss on prime time to come into a Sunday noon game lackadaisical,” Dallas running back Ezekiel Elliott said.

“We still have a lot to prove. We still got to win this division. Right now, it’s a little bit of an uphill battle, but we’re going to have to scratch and claw our way out of it.”

Detroit is coming off its open week following a 29-0 loss to New England.

Despite the shutout, the Lions are still second in the NFL in scoring because they averaged 35 points per game the first four weeks. Problem is, they gave up 35.25 points per game in those four.

“We haven’t done a good job of finishing games and winning, but moving the ball and putting points on the board, we’ve done a decent job of,” said Goff, who has contributed to the poor start with four interceptions.

“So we just get back to that and treat New England as hopefully an anomaly. And that doesn’t mean we ignored it.”

It's hard to ignore the struggles for a Dallas offense amid the victories.

A year after having one of the best offenses in the NFL, the Cowboys are in the bottom 10 in points, total yards, passing yards and third-down percentage.

They believe Prescott can fix that, despite the Dallas offense struggling even before he fractured the thumb on his throwing hand in a 19-3 loss to the Buccaneers.

“Sky’s the limit,” receiver CeeDee Lamb said. “The offense is very good and everyone knows this. When we get him back, we’re going to show everybody.”

Dan Campbell, who is 4-17-1 as Detroit’s coach, shared some details of a recent conversation with owner Sheila Ford Hamp regarding the team and its direction under him and second-year general manager Brad Holmes.

“I would say that she understands,” he said. “She’s very supportive, but she’s frustrated and she should be. We all believe we should be better than where we’re at. But I do know that she’s all-in, and I know that she believes in what Brad and I are doing.”

This is a homecoming for Campbell. He was born in Clifton, Texas, about 100 miles from the home of the Cowboys, and raised on a ranch.

The former tight end played at Texas A&M before getting drafted by the New York Giants and also playing for the Cowboys and Lions.

SOMETHING'S GOT TO GIVE

The Cowboys lead the NFL with 24 sacks, the most they've had through six games since 1987. The Lions are tied for the fewest sacks allowed with seven.

Reigning NFL Defensive Rookie of the Year Micah Parsons will be motivated after getting shut out on sacks in the loss to the Eagles and being on the wrong end of several big plays.

The Lions are hoping D’Andre Swift rejoins a strong running game after missing two games with ankle and shoulder injuries. Swift had 175 yards of offense and two scores in a 38-35 loss to the Eagles in Week 1, and had 87 yards from scrimmage in the only win the following week against Washington.

The return of Prescott will bring focus to improving the league's 27th-ranked passing attack, particularly with the 2016 NFL Offensive Rookie of the Year having a 3-0 record with eight touchdown passes and no interceptions against the Lions.

It might be easy to forget that Elliott is coming off consecutive games of at least 75 yards rushing for the first time since his most recent 100-yard games early last season.

Or that Tony Pollard owns Dallas' three longest plays from scrimmage this year, with the Cowboys set to face the NFL's worst run defense.

Asked Elliott: “You’ve got two great backs and a good O-line, so why don’t you make it easy for Dak?”

Detroit cornerback Amani Oruwariye, who had a career-high six interceptions last year, was a healthy scratch in the team’s previous game.

Oruwariye watched from the sideline as injuries hit the secondary in the loss to the Patriots.

“It was just killing me as much as you can imagine,” he said. “It just, it hurt me to my core. Just seeing that I’m healthy and I wasn’t able to go out there and do anything.”