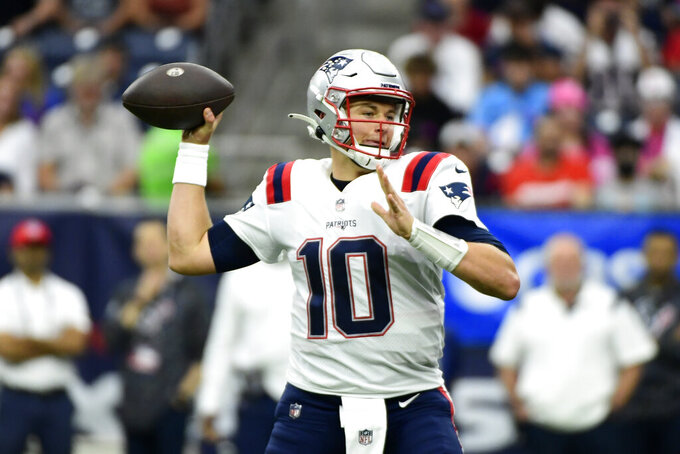 New England Patriots quarterback Mac Jones (10) throws a pass against the Houston Texans during the first half of an NFL football game Sunday, Oct. 10, 2021, in Houston. (AP Photo/Justin Rex)

OPENING LINE: Cowboys by 3 1/2, according to FanDuel SportsBook.

TURNOVER DIFFERENTIAL: Cowboys plus-7; Patriots minus-3.

COWBOYS PLAYER TO WATCH: CB Trevon Diggs leads the NFL with six interceptions and has at least one in all five games. The second-year player can tie the NFL record of six straight games with at least one pick to start a season. Among those with the record are the late Tom Landry, who coached the Cowboys for their first 29 seasons. He had interceptions in six straight games to start the 1951 season with the New York Giants. The others are Barry Wilburn with Washington (1987) and Brian Russell for Minnesota (2003).

PATRIOTS PLAYER TO WATCH: LB Matt Judon has been the defense’s best pass rusher this season. He had two sacks and a fumble recovery against Houston, his eighth career game with two or more sacks. He’s tied for second in the NFL with 6 1/2 sacks and is looking to get a sack for the fifth game in a row.

KEY MATCHUP: Cowboys running backs vs. Patriots defensive line. After three straight weeks of allowing 120 or more rushing yards, the Patriots held the Texans to 67 yards on the ground. They’ll need another big performance this week against a Dallas team that features the duo of Ezekiel Elliott and Tony Pollard, who have combined for six rushing touchdowns.

KEY INJURIES: The Cowboys don’t expect to bring WR Michael Gallup (calf strain) off injured reserve until after next week’s bye. DE Dorance Armstrong (ankle) and S Donovan Wilson (groin) also are likely to remain out, although Wilson did return to individual work for the first practice of the week. … Patriots RB Damein Harris (ribs) and RG Shaq Mason (abdomen) both missed the first practice of the week.

SERIES NOTES: The Cowboys are 0-5 against the Patriots in the Bill Belichick era, with a six-game losing streak overall. The last Dallas victory was in 1996, which was the last time the Cowboys were defending Super Bowl champions. That 1996 victory was the last of seven straight to start the series for Dallas. ... It’s a meeting between two of the top five teams in all-time regular-season winning percentage. Dallas (.571) is No. 2, New England (.561) is fifth.

STATS AND STUFF: The Cowboys are seeking their first five-game winning streak since 2016, when QB Dak Prescott and Elliott were twin rookie stars leading an 11-game run that carried Dallas to 13-3 and the top seed in the NFC playoffs. ... With two takeaways, the Cowboys will tie the franchise record of 10 consecutive games of forcing multiple turnovers. The other two 10-game runs were in 1970-71 and 1976-77. The current nine-game streak going back to last season is an NFL best. ... Dallas and Cleveland are the only teams with multiple 200-yard rushing games. The Cowboys entered last week’s game averaging 201 yards in the previous three games and hit that number exactly against the Giants. ... Prescott leads the NFL with 10 touchdown passes and has a passer rating of 107.9 on blitzes. The Patriots have held opposing QBs to one score and a 76.7 passer rating when blitzing. … Prescott ranks second in the league in passer rating among qualified passers (116.9) and is one of four quarterbacks with a passer rating of 100 or higher in four of his first five games this season. ... Prescott can become the first Dallas QB with at least three touchdown passes in four consecutive games. ... Elliott has consecutive 100-yard games for the first time since three straight in 2019. … The Cowboys had two 100-yard receivers (Amari Cooper, CeeDee Lamb) in the 31-29 loss to Tampa Bay in the opener. They haven’t had one since, in part because of the success of the running game and in part because receivers and tight ends are sharing the wealth. … Patriots QB Mac Jones ranks fifth in the NFL with a 71.1 completion percentage and has a completion percentage of 70 or higher in four of his first five career starts. … Jones can become the first rookie quarterback in NFL history with five games with a completion percentage of 70 or higher (minimum 30 attempts). The only other rookies with four such games were Justin Herbert (2020) and Prescott (2016), who both were Associated Press Offensive Rookie of the Year winners. … Jones has 135 career completions, tied with Joe Burrow (2020) for most by a rookie quarterback in his first five career starts in NFL history. Jones has a passer rating of 100 or higher in two of three home starts and is looking to throw for 270 or more yards for the fourth game in a row. … TE Hunter Henry led the team with six receptions for a season-high 75 yards and a TD last week vs. Houston. He is looking for his third straight game with a TD catch. He had five catches for 76 yards and a receiving TD in his only career game vs. Dallas (Nov. 23, 2017 with the Chargers). … LB Jamie Collins had a sack in his first game since re-signing with the Patriots last week. He had 10 tackles and a forced fumble in the 2019 meeting. . … DB Kyle Dugger had a team-high 10 tackles last week.