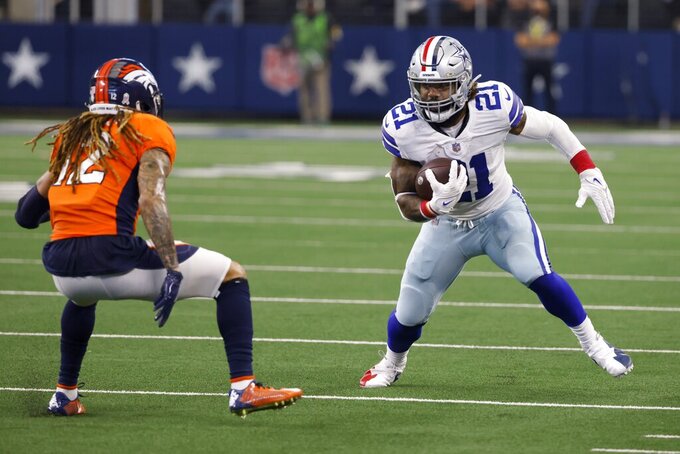 FRISCO, Texas (AP) — Dak Prescott and Ezekiel Elliott won't be repeating the remarkable run from their rookie seasons with the Dallas Cowboys five years ago.

The star quarterback and running back got more than halfway there with six consecutive victories following a loss in the opener before a jarring end to the streak in a 30-16 loss to the Denver Broncos.

The top seed in the NFC, which Dallas earned in 2016 after 11 straight wins behind Prescott and Elliott following the opener, is still in play. The Cowboys just have to forget a humbling day when they trailed 30-0 as double-digit favorites.

NFC-leading Arizona (7-1) is the only team with fewer losses than the Cowboys (6-2) after Green Bay and the Los Angeles Rams both dropped to 7-2 on Sunday. Super Bowl champion Tampa Bay (6-2), which beat Dallas in the opener, is the other team in that group right now.

The Cowboys rode the NFL's No. 1 offense on their hot start, winning a game without Prescott (strained calf) before the clunker against the Broncos.

Dallas has to believe Prescott's group is more like the one that scored at least 35 points in eight consecutive home starts by him — an NFL first, according to Elias — and not the unit that had 122 yards after three quarters against Denver with the league leader in completion percentage at 6 of 19.

“I think everybody just has to be accountable for what just happened,” Prescott said. “I think it starts with the leaders. We’re not looking and asking the coaches to do something different.”

One game doesn't change what offensive coordinator Kellen Moore has shown with perhaps the league's most diverse offense. Lost in the shuffle of the 30-0 deficit against Denver was Malik Turner getting the first two touchdown catches of his Dallas career.

The Cowboys have six receivers and tight ends with multiple TD catches, and there's no arguing that Amari Cooper and CeeDee Lamb make up one of the best receiving tandems in the NFL.

It appears RB Ezekiel Elliott will be battling a right knee issue all season. The biggest flareup so far came against Denver. Elliott limped off the field after one of his carries, came back for a 21-yard run on a screen pass and then went to the sideline again one play later. The two-time rushing champion was still playing late with the game out of reach.

“I saw him in the dressing room and I thought the way he finished the game, the way he was running, just his intensity, eases my mind on a going-forward basis,” Jones said. “And the trainers didn’t give any indication there was an issue going forward.”

Tony Pollard has been solid as a complementary back and had a 40-yard touchdown run last season in the only game Elliott has missed because of injury in his career (calf).

However, Pollard was limited to 29 yards on the other 11 carries in that 41-33 victory over San Francisco.

Rookie LB Micah Parsons could be a star in the making after the Cowboys drafted him 12th overall. His best game helped Dallas win at Minnesota when Cooper Rush had to start for the injured Prescott. Then he had his first two-sack game against the Broncos with 2½. Parsons is the first Dallas rookie to have five sacks in his first eight games.

Big plays have been an issue most of the season for first-year defensive coordinator Dan Quinn's unit. And that was before the Cowboys gave up a season-high 13 plays of at least 20 yards against a Denver offense that had been struggling to score points.

CB Trevon Diggs has been great, tying an NFL record with at least one interception in each of the first six games and leading the NFL with seven overall, two returned for touchdowns. But he's been susceptible to the big play, including Tim Patrick's 41-yard catch for Denver that handed Dallas its first double-digit deficit this season.

Reinforcements should be on the way with the eventual return of WR Michael Gallup (calf strain), DT Trysten Hill (2020 knee injury), DT Neville Gallimore (preseason elbow injury) and DE DeMarcus Lawrence (broken foot). Those players are likely to come back in that order. Gallup and Lawrence have missed every game since the opener. ... The Cowboys are hoping for the return soon of LT Tyron Smith, who missed the Denver game with an ankle injury. ... TE Blake Jarwin will be out at least two more games with a hip injury.

6 of 8 — The Cowboys have missed the playoffs just once after winning six of their first eight games. They lost the last five games in 1986 to finish 7-9, ending an NFL-record run of 20 consecutive winning seasons.

If the Cowboys can stay in the running for the top seed along with Arizona, their meeting in Week 17 (one week before the end of the regular season) looms large. The next opponent is Atlanta at home Sunday.