Dalton comes home to Texas as Prescott's backup with Cowboys 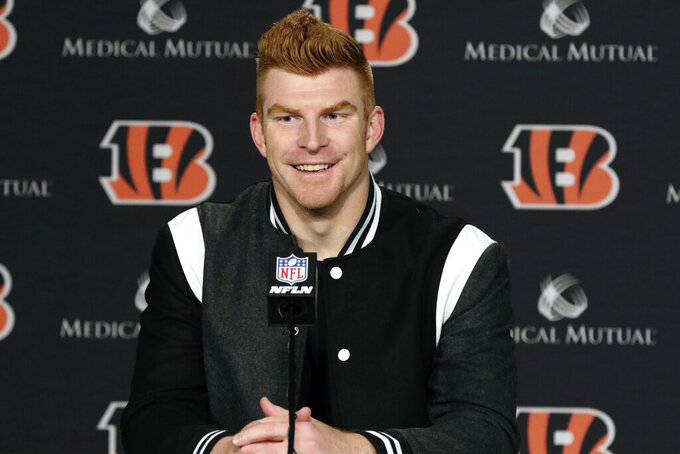 FILE - In this Dec. 29, 2019, file photo, Cincinnati Bengals quarterback Andy Dalton answers questions after his team defeated the Cleveland Browns in an NFL football game in Cincinnati. Dalton is coming home to Texas as Dak Prescott's backup with the Dallas Cowboys. Dalton and the Cowboys agreed to a one-year deal that guarantees the former Cincinnati starter $3 million and could be worth up to $7 million, two people with direct knowledge of the deal told The Associated Press on Saturday, May 2, 2020. (AP Photo/Gary Landers, File)

Andy Dalton is coming home to Texas as Dak Prescott's backup with the Dallas Cowboys.

Dalton and the Cowboys agreed Saturday to a one-year deal that guarantees the former Cincinnati starter $3 million and could be worth up to $7 million. The agreement was first reported by ESPN.

The Cowboys reached a deal with Dalton two days after he was released by the Bengals. That moved cleared the way for No. 1 overall draft pick Joe Burrow, who led LSU to the national championship.

Dalton, born and raised in the Houston area, led TCU to an undefeated season that included a Rose Bowl victory over Wisconsin during the 2010 season before the Bengals drafted him in the second round.

The Cowboys have relied on the untested Cooper Rush behind Prescott the past two seasons. The 32-year-old Dalton marks their biggest investment in a veteran backup since Prescott replaced the injured Tony Romo as a rookie in 2016 and ended up taking his job for good.

Dalton started 133 games for the Bengals and led the franchise's best stretch of playoff appearances — five straight from 2011-15 — but couldn’t get that elusive win.

Cincinnati lost in the first round each time, setting an NFL record. Dalton had a broken thumb and was sidelined for the last of those playoff appearances, which ended in a last-minute meltdown and an 18-16 loss to Pittsburgh during the 2015 season.

Dalton's 70-61-2 record as a starter is second best by a Bengals quarterback with at least 10 starts, trailing Virgil Carter. Dalton holds the club records for touchdown passes (204) and completions (2,757).

Coach Zac Taylor signaled the end of Dalton’s career in Cincinnati by benching him for three games midway through last year’s 2-14 season, a move that shocked Dalton and his longtime teammates. Dalton was upset the Bengals didn’t try to trade him before the deadline.

The Cowboys have placed the franchise tag on Prescott, who hasn't signed the one-year tender worth about $31 million. The sides have until July 15 to get a long-term contract done.

Prescott played out his four-year rookie contract, becoming on of the NFL's best bargains as 2016 NFL Offensive Rookie of the Year and a two-time Pro Bowler. The 26-year-old's representatives and the Cowboys have been working on a long-term deal for about a year.

After leading Dallas to the NFC's top seed as a rookie in 2016 and losing his first playoff game to Aaron Rodgers and Green Bay, Prescott broke through with his first postseason victory two years later.