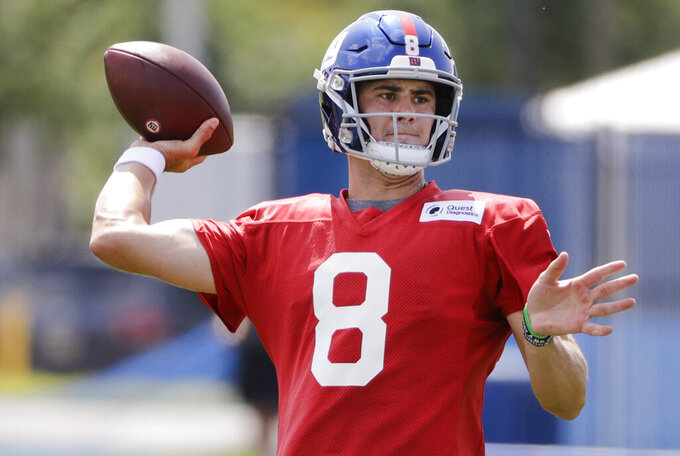 FILE - In this July 25, 2019, file photo, New York Giants' quarterback Daniel Jones throws a pass at the NFL football team's training camp in East Rutherford, N.J. The New York Giants are finally going to get a glimpse of Daniel Jones in an NFL game. The sixth pick overall in the draft, Jones is going to get his first snaps in live action when the Giants face the New York Jets on Thursday, Aug. 8, 2019 at MetLife Stadium. (AP Photo/Frank Franklin II, File)

EAST RUTHERFORD, N.J. (AP) — The New York Giants are finally going to get a glimpse of Daniel Jones in an NFL game.

The sixth pick overall in the draft, Jones is going to get his first snaps in live action when the Giants face the New York Jets on Thursday night at MetLife Stadium.

It will be the first time the heir apparent to two-time Super Bowl MVP quarterback Eli Manning will be playing without the protection of a red jersey, the NFL's universal sign for fellow players not to touch.

"I'm excited," Jones said Tuesday after practice. "I think it'll be a whole lot of fun to just run out there for the first time and kind of be part of the scene, be part of an NFL football game. So, I'm excited, I'm looking forward to getting out there."

Since training camp opened roughly two weeks ago, Jones has looked good. He has thrown the deep pass better than most expected. He has shown mobility and he clearly can run the offense.

What will be different will be the Jets' defense. Their looks, base coverages and pressures will be new and Jones will have to be ready for coordinator Gregg Williams' aggressive style, which probably will be blitz heavy.

Jones is even looking forward to being hit, saying it will get him going.

Coach Pat Shurmur refused to say who would play or how long they would go. His lone exception was Jones. He is going to play.

"We want him to play good football and execute well," Shurmur said. "I think that's the important thing. Everybody that plays on Thursday is going to play a portion of the game. So, we want to see the guys that are playing make the best of the reps that they get."

Jones has his own goals.

"I think first and foremost it's to score points, move the offense down the field and score points," the Duke product said. "So, I think that's always the goal, but in that, it's executing consistently, keeping the ball moving forward, not hurting ourselves, and executing what we have on offense. So, doing that, taking care of the ball, I think all those things, but if we're scoring points, if we're moving the ball, I think we'll feel good about what we did."

Defensive tackle Dexter Lawrence II believes his roommate is ready. He said he knew Jones would be a good one since they played against each other in a Duke-Clemson game.

Jones moved the Blue Devils against a good Clemson defense.

"I knew his talent when they drafted him. I said, 'OK, he deserves to be there.' I respect that," said Lawrence, who quipped that Jones has been coming in after he has fallen asleep.

Jones intends to enjoy his first NFL game, from the time he walks on the field and surveys the stadium to his playing time. He will have family and friends there.

Jones said he grown since being drafted.

NOTES: WR Sterling Shepard (thumb) will not play Thursday. ... A day after his son was born, DT B.J. Hill came back to training camp and worked out after practice.