With Daniel Jones waiting, when do Giants sit Eli Manning? 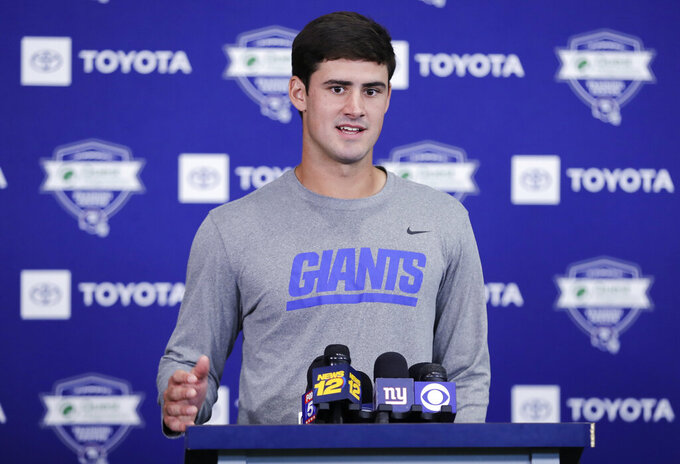 EAST RUTHERFORD, N.J. (AP) — Since taking Daniel Jones with the sixth pick overall in the draft, the biggest question facing Pat Shurmur and the New York Giants is when does the kid replace Eli Manning at quarterback?

A two-time Super Bowl MVP, the 38-year-old Manning is expected to start in the opening weekend of the season.

There's the usual speculation Jones will play this season if the Giants, who have won eight games over the past two seasons, fall out of playoff contention.

With Manning, the No. 1 pick overall in the 2004, in the final year of his contract, next year also is a possibility.

The topic is something neither quarterback, nor the Giants, want to discuss.

One person who will talk about it is Hall of Fame quarterback Kurt Warner.

Warner was replaced by Manning after the ninth game of the '04 season. New York had a 5-4 record and was in the playoff hunt.

"When you are the veteran guy and you know there is a guy behind you that eventually is going to play, it was always one of those things you had to fight. Not playing worried about making a mistake, or getting tight and playing differently than before," Warner said Thursday as the Giants opened training camp. "Most guys will not tell you that, but it is the way it is. You go: 'How long is my leash? If I have a bad game, is that it?. If I have a bad half, is that it?'"

Warner had signed a one-year, $3 million contract after he was cut by St. Louis, so he knew it was a matter of time before Manning played. His goal was to hang on for two years — he had a player option for a second season — or parlay it into another job. He never finished the first year.

After a 5-2 start, the Giants lost consecutive games to Chicago and Arizona, and coach Tom Coughlin made the change.

Coughlin called Warner into his office and told him he was the better of the two quarterbacks and the move wasn't fair.

"I think Tom's approach was we're not a great football team, and it doesn't mean something can't happen. But is it better to kind of start the future and start building and get our young quarterback ready for that run two years from now and three years from now," said Warner, who watched Manning go 1-6 the rest of the 2004 season.

It turned out to be the right move for New York. The Giants went 11-5 the following season and won the NFC East. Two years later, they won the Super Bowl, the first of two Manning would win.

"I think there's a lot more flexibility with this situation because of who Eli is and the ability to kind of let this thing really play out instead of having to sit here and look for the first opportunity to get Daniel," said Warner, now an analyst for NFL Network. "I don't think the Giants are going to be doing that."

Warner said Manning can still make all the throws, provided his line protects him. It's been that way throughout his 18-year career. The lack of protection and injuries to his receivers are the major reasons New York has made the playoffs once since winning the Super Bowl in February 2012.

Jones still has much to prove to Warner. He has all the intangibles to play in the NFL, but can he raise his game as a pro and make the throws under more pressure?

"When you watched him in college, there were times that physically where you wondered does he have that — that next-level talent from a physical standpoint doesn't mean he can't be great with that," he said. "It just means the margin of error shrinks a lot and you have to be in tune with all those other things that you have to do."

Warner chose to leave the Giants after his one season and went to Arizona, where he led the Cardinals to the Super Bowl in 2008. He retired after the 2009 after being injured in a playoff game against the Saints.