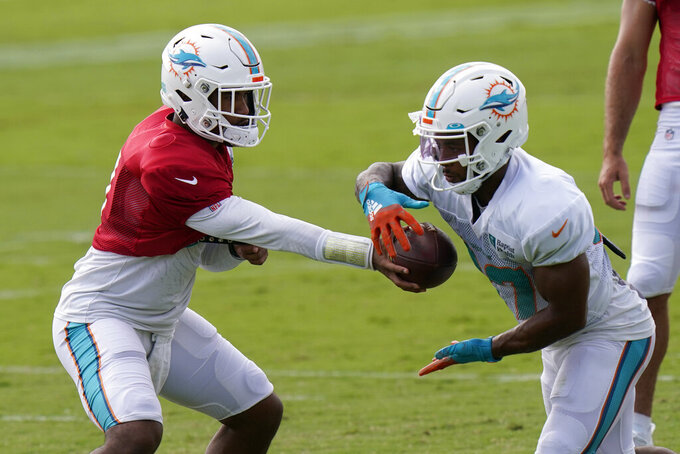 The reaction to Tua Tagovailoa's first few practices was different.

The raves must wait. But if Flores is to become the Dolphins' first Super Bowl coach since Shula, he needs for Tagovailoa to become their best quarterback since Marino.

For the Dolphins, success this season will be defined by Tagovailoa's progress, perhaps even more so than improving on last year's 5-11 record.

Like all 2020 rookies, Tagovailoa's learning curve is especially steep due to the coronavirus pandemic, which forced the cancellation of most offseason training for NFL teams. And because he is coming back from a career-threatening hip injury that ended his Alabama career in November, the Dolphins won't rush him.

Ryan Fitzpatrick, a 16-year veteran and the Dolphins' most valuable player last year, describes himself as a “placeholder” at quarterback. In the meantime, Tagovailoa is winning praise for his personality, at least.

“He’s really just a kid at 22 years old,” tight end Mike Gesicki said. "He could’ve still been in college, which is crazy when you think about that stuff. I’m super excited about his future, and it’s been good to be around him. He’s a really good dude.”

WHO'S GOING TO BLOCK?

The Dolphins may be disinclined to expose Tagovailoa's surgically repaired hip until they settle on an offensive line, which has been a work in progress for years.

Last season they tied for the most sacks allowed in the NFL, and their total yards rushing was the league's lowest since 2006. So Miami took three offensive line in the first four rounds of the draft, and all have a chance to start. The acquisition of veteran running backs Jordan Howard and Matt Breida should also help the running game.

The Dolphins will likely be bigger, at least. Four potential starters in the offensive line weigh from 323 to 343 pounds.

“There are a bunch of 400-pound people around out there that can’t play football, so size is not the only factor," new offensive coordinator Chan Gailey said. "Bigger is better only if it’s better.”

The Dolphins allowed a franchise record 494 points last year, had the fewest sacks in the NFL and gave up a league-high 39 touchdown passes.

Veteran newcomer Byron Jones and first-round pick Noah Igbinoghene join Xavien Howard at cornerback, giving Miami potentially one of the league's best trios. The team should be better at end too, with the additions of veterans Shaq Lawson and Emmanuel Ogbah.

The Dolphins will do plenty of platooning in their defensive front seven, but one player likely to be on the field for almost every down is veteran newcomer Kyle Van Noy.

A starter for the New England Patriots' Super Bowl champions in 2016 and 2018, Van Noy can rush the passer, defense the run and drop into coverage.

“I feel like I’m the last of a dying breed,” he said. "I don’t think you can find players that can do all three skill sets. I'm just trying to be a problem and take advantage of a mismatch wherever I line up.”

Receivers Albert Wilson and Allen Hurns, who between them totaled 75 receptions for 766 yards last year, opted out because of the coronavirus.

That could create an opening for seventh-round draft pick Malcolm Perry, a 5-foot-9 quarterback at Navy who might see playing time as a slot receiver, kick returner and scatback.

“He has played tag growing up,” Gailey said. “He knows how to make people miss and make them get out of the way. He’s an interesting guy to work with.”

Many NFL teams have ruled out spectators to start the season, but the Dolphins plan to allow up to 13,000 masked, socially distancing fans to attend their home opener against the Buffalo Bills.

“Music to our ears,” Fitzpatrick said.