Eager Titans want to take next step, go from good to great 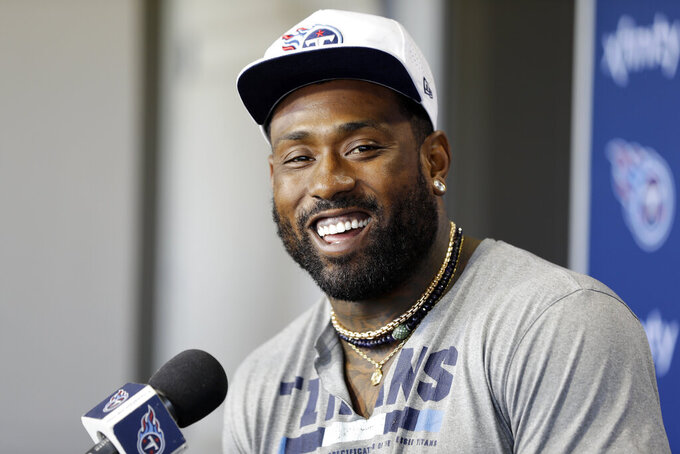 Tennessee Titans tight end Delanie Walker answers questions during a news conference Monday, April 15, 2019, in Nashville, Tenn. The Titans are trying to figure out how to improve after three straight 9-7 seasons as the team begins their offseason program. (AP Photo/Mark Humphrey)

NASHVILLE, Tenn. (AP) — The Titans are enjoying their best run since this franchise moved to Tennessee more than two decades ago, stringing together three straight 9-7 seasons.

Coach Mike Vrabel's task in his second season is figuring out how to push the Titans to greatness. That includes changing players' mindsets when asked how they're doing. The new preferred answer is great, not good.

"It might not work, but we're going to try to remind ourselves that we're trying to be great every day," Vrabel said Monday at the start of the Titans offseason program. "And instead of throwing it out there, 'I'm good, I'm great.' We got to believe that we can be great to take the next step and do that every single day."

Byard, who's in the final year of his rookie deal, sees plenty of room for the Titans to improve on defense; last year they were eighth in yards allowed, sixth against the pass and third in fewest points allowed. Coordinator Dean Pees is back for a second straight season, and the Titans signed safety Kenny Vaccaro to a four-year deal in March keeping their secondary together as well. They signed linebacker Cameron Wake in free agency too.

Cornerback Logan Ryan sees the challenge of going from good to great involving trusting Vrabel, the system and the coaches. Ryan pointed out he had to trust a new position coach last year in Kerry Coombs who came to the NFL from the college ranks.

"It's something that we're saying we want to go from being a good team, a consistent team the last couple years to a great team and to do great things, and that's really trusting the teammates next to you ...," Ryan said. "You've got to earn your stripes, and that takes time."

Vrabel doesn't take attendance for the offseason program, which is voluntary except for a final minicamp in June. The Titans coach said he heard from players who didn't attend meetings at the team headquarters.

Just how much better the Titans can be will depend on Marcus Mariota.

The quarterback enters the fifth and final year of his contract with the Titans still waiting to see if he can play all 16 games in a season for the first time in his career. Mariota missed three games last season, including the final game of the year. The Titans lost that game and missed out on a second straight playoff berth.

Mariota spent his offseason just trying to get healthy, and he has also added a few pounds hoping that helps him survive a whole season. Vrabel noted he played against big quarterbacks in John Elway and Dan Marino, and the AFC South features big quarterbacks in Houston's Deshaun Watson and Andrew Luck of Indianapolis.

In addition to his health concerns, Mariota has yet another new offensive coordinator — though Arthur Smith has been around Mariota during his past four seasons.

"Now I have an opportunity sit down with the coaches and talk about what I can do better in my strength as a player and whether it's maneuvering in the pocket or other aspects of my game," Mariota said. "There are definitely things that I can improve on."