Eagles count on Brown, Hurts to lead them to contention 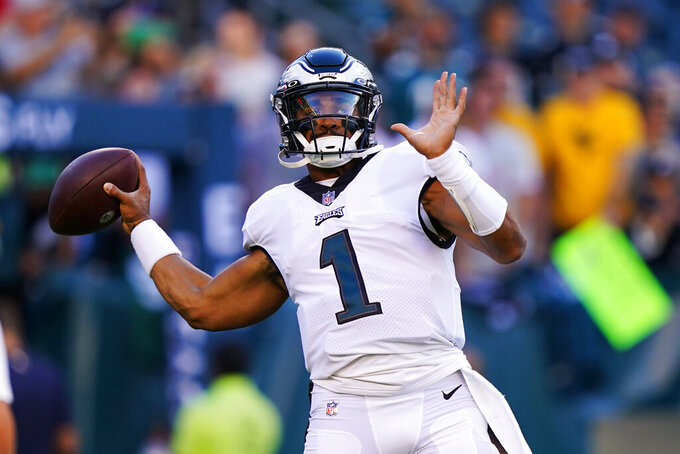 Strengths: Philadelphia’s offensive line is deep, talented and experienced. Anchored by five-time Pro Bowl C Jason Kelce and three-time Pro Bowl RT Lane Johnson, the unit has combined for 351 starts — all with the Eagles. LT Jordan Mailata, LG Landon Dickerson and RG Isaac Seumalo round out perhaps the best line in the NFL. They helped open up holes for an Eagles rushing attack that led the NFL in 2021 with 2,715 yards and 25 TDs. Kelce put off retirement to return for his 12th season, but his streak of starting 122 consecutive regular-season games could be in jeopardy after having elbow surgery in early August, though he is eyeing a return for Philadelphia’s season opener at Detroit on Sept. 11. If Kelce can’t play, rookie second-round pick Cam Jurgens, who received rave reviews during training camp, will start in Kelce’s place.

Weaknesses: Safety is the biggest question on Philadelphia’s improved defense. After playing in a rotation last year, fourth-year pro Marcus Epps has been moved to starter after Rodney McLeod signed with the Colts in the offseason. Eagles coaches have spoken highly of Epps, who set the stage for a strong training camp with an interception of QB Jalen Hurts on the first day of preseason practice. Next to Epps will be veteran Anthony Harris, who led the Eagles with 72 tackles last season in his first year in Philadelphia after spending the previous six in Minnesota. The depth behind Epps and Harris remains murky.

Camp Development: Rookie DT Jordan Davis has come as advertised and he had an impressive camp. The 26-year-old, who is listed at 6-foot-6 and 336 pounds, has wreaked havoc in the trenches during practices, and video of his 1-on-1 domination of Jurgens during one session went viral on social media. Davis’ 40-yard dash time of 4.78 seconds at the NFL scouting combine was the fastest for any player over 330 pounds since 2006 and contributed to Philadelphia selecting University of Georgia product with the 13th pick. Davis may not rack up sacks and tackles, but his presence tying up offensive linemen and clogging holes in the middle is expected to help free teammates to make plays. He displayed his athleticism in Philadelphia’s first preseason game and was in hot pursuit of Jets QB Zach Wilson just before Wilson went down with a right knee injury.

Fantasy Player To Watch: Fifth-year TE Dallas Goedert is poised for a breakout season. The 2018 second-round pick took over the reins for three-time Pro Bowl tight end Zach Ertz midseason last year and finished the regular season with 56 catches for 830 yards and 4 TDs, including averaging 61.4 receiving yards in the final 10 regular-season games in the No. 1 role after Ertz was traded to Arizona. Goedert has had a strong training camp, including a 22-yard TD in the Eagles’ first preseason game, and will receive lots of targets from Hurts this season.

Expectations: With a solid returning core, some key offseason additions and a relatively weak NFC East division, the Eagles are poised to return to the playoffs for the second straight season under second-year coach Nick Sirianni. But Philadelphia’s notoriously demanding fans likely won’t be satisfied with merely a postseason berth, particularly one that ends like last season’s 31-15 wild-card round blowout loss at Tampa Bay. And fans might get their wish because it won’t be surprising if the Eagles make a deep postseason run this season. With Brown’s addition on offense and Hurts’ predicted improvement in his second season in Sirianni’s system and second as a full-time starter, Philadelphia’s offense is expected to be more dynamic than the ground-and-pound attack that was effective last season. Expect the offense to open up this season, with Hurts targeting Brown, Quez Watkins and DeVonta Smith for more deep throws. Bradberry gives Philadelphia a dynamic one-two tandem at cornerback opposite four-time Pro Bowl corner Darius Slay. And Reddick, who had 23½ sacks over the past two seasons, will help boost an Eagles pass rush that ranked 25th in the NFL with 31 sacks last season.