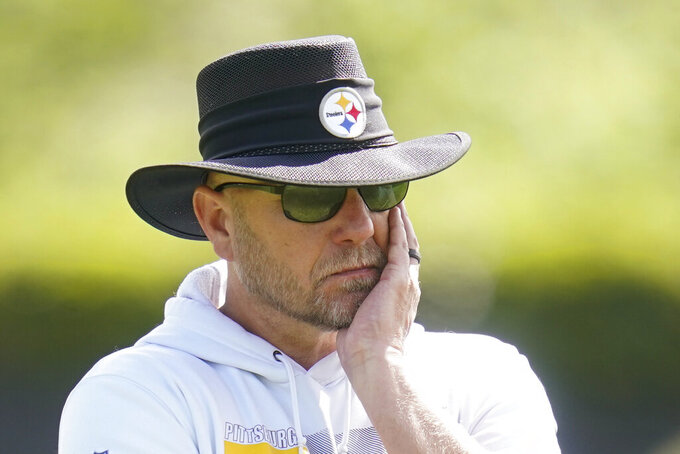 FILE - Pittsburgh Steelers offensive coordinator Matt Canada watches as players go through drills during an NFL football practice at rookie minicamp, Friday, May 13, 2022, in Pittsburgh. Pittsburgh Steelers offensive coordinator Matt Canada believes the NFL's 30th-ranked offense is getting close to busting out. The question, however, if it will be in enough time to salvage the season or Canada's long-term prospects with the organization. (AP Photo/Keith Srakocic, FIle)

Even as the weeks pass and the losses mount. Even as drives continually stall in crucial situations.

“This is going to be a tremendous offense,” Canada said Thursday.

Might be time to start showing it. Might be past time, actually, for Pittsburgh's embattled second-year offensive coordinator.

Canada is well aware of the crucible he finds himself in with the Steelers (2-5) near the bottom of the NFL in nearly every significant statistical offensive category, from scoring (31st) to yards (30th) to touchdowns (30th).

He's paid to find a way to get Pittsburgh into the end zone. It's not happening, and frustration is growing both inside and outside the locker room.

Wide receiver Chase Claypool wants opportunities to make plays downfield. George Pickens and Diontae Johnson too. Same for rookie quarterback Kenny Pickett, who has yet to complete a pass of 40 yards or more.

The running game is in the same position. The Steelers have yet to have a run of 20 yards through seven games. The list of players across the league that have at least two runs of at least 20 yards includes quarterbacks Justin Fields, Daniel Jones, Josh Allen, Jacoby Brissett and wide receiver Braxton Berrios.

The numbers are ugly. So is the mood. Externally at least. Type “Matt Canada” into the social media platform of your choice and the anger of a fanbase who spent 18 years watching Ben Roethlisberger throw 418 touchdowns is palpable.

While Canada is doing his best to avoid it, he admitted he's not “naive” to the ever-increasing external criticism.

So there are no plans to blow up a scheme that's heavy on misdirection and — to this point anyway — light on results.

Even if the game plans are, to hear Canada tell it, a collaborative effort that includes the position coaches and head coach Mike Tomlin.

As frustrated as Canada is, he pointed to Tomlin's leadership as one of the reasons he isn't interested in overhauling the playbook.

“If you change your message every week, if you do something different every week, you never get any better,” Canada said.

And Canada insists the Steelers are improving. That Pickett is taking a step forward as he gains more experience. That running back Najee Harris is ever closer to breaking out. That a play here or a play there — and more importantly, a win here or a win there — is not far off.

To Canada and the players he coaches, the scoreboard is saying one thing. The game film is saying another. The issue isn't the play-calling as much as the play execution.

One missed block, one turn the wrong way, one ill-timed penalty and momentum can vanish, something that's happened far too often for an offense that doesn't have a starter older than 26.

“We’ve made a lot of mistakes over the past couple of weeks, mistakes that are unacceptable,” said backup wide receiver Miles Boykin, one of the most experienced players in an extremely young skill position group. “That’s not on anybody else besides us.”

On the surface, what the Steelers are doing on a weekly basis is the definition of insanity. Boykin insists that it's not. The issue isn't what happens when Canada scans his call sheet, it's what happens once the ball is snapped.

“We can keep doing the same things over and over again, but if we don’t do it right, then it’s not gonna make a difference no matter what, right?” Boykin said. “I think that's where we're at right now.”

This is hardly the first time in Canada's career he's found himself in a tight spot. He spent one nightmarish season as the offensive coordinator at LSU in 2017. In 2018 he found himself thrust into the unenviable position of interim head coach at Maryland after D.J. Durkin was suspended in August before being fired on Halloween.

He took a year off before being hired by the Steelers in 2020 to serve as quarterbacks coach, where his job was to mentor backups Mason Rudolph and Josh Dobbs. Tomlin promoted him to offensive coordinator in January 2021 shortly after Randy Fichtner was let go. Canada spent last season trying to search for common ground with Roethlisberger.

The thought was Roethlisberger's retirement combined with the arrival of the more mobile Pickett and Mitch Trubisky would allow Canada to fully implement an offense that — at times during his 20-plus years in coaching — has been dynamic.

It hasn't happened. And while Pickett's future in Pittsburgh is assured. Canada's is not. Progress likely needs to happen sooner rather than later.

And no one knows that better than Canada.

“All you can do is just keep fighting and keep pushing,” he said, “and wait for the dam to break.”

NOTES: CB Levi Wallace (shoulder) and DT Larry Ogunjobi (knee) did not practice Thursday. ... DT Montravius Adams (hamstring), WR Steven Sims (hamstring) and TE Pat Freiermuth (ankle) were full participants. So was CB Ahkello Witherspoon, who has been out since Week 3 with a hamstring injury.