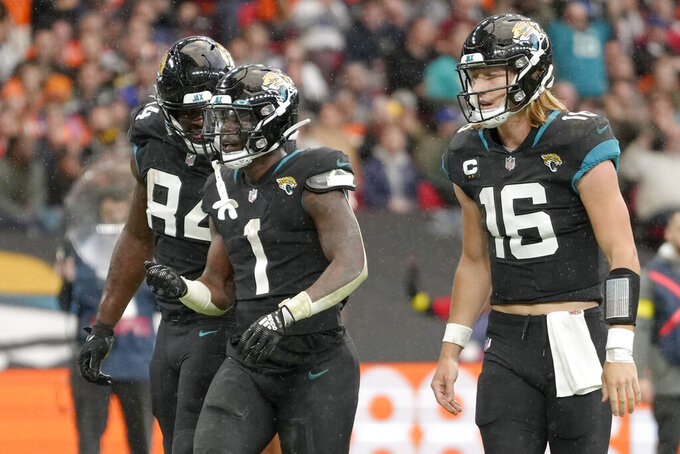 Of course, we have our studs, anchors, and the players we’re starting virtually no matter what. We don’t need anyone to tell us to start Josh Allen.

Ryan Tannehill’s status is uncertain. He is 25% likely for a top-12 week if fully cleared for Week 9.

That’ll happen when we’re looking at just 26 starting quarterbacks given the number of byes.

Kirk Cousins gets a game against his former team, the Washington Commanders, this week. Washington ranks first in adjusted rush defense, but 26th against the pass, via numberFire’s metrics. Cousins has accrued 243.7 yards and 1.7 touchdowns per game in three matchups against bottom-12 pass defenses this season with just a single interception. It’s a high-floor situation for Cousins this week.

Trevor Lawrence has a matchup against the Las Vegas Raiders, a team that is allowing 258.1 yards per game through the air, eighth most in the NFL. Their adjusted passing efficiency is even worse (31st). Lawrence remains an evasive week-to-week fantasy option, but has played above expectation when adjusting his Passing Net Expected Points (NEP) per drop-back for opponents faced. The Raiders have kept just two quarterbacks below the league-average in per-drop back efficiency, and every passer against them threw for at least 229 yards. It’s about as good as we could ask for Lawrence.

Justin Fields has entered the fantasy quarterback conversation — if you didn’t already consider him to be there. Although Fields has averaged fewer than 20 pass attempts per game, he has also averaged 9.6 carries and 51.0 rushing yards. That includes games of 88, 82, and 60 rushing yards in his past three games. That’s led to top-eight quarterback scoring weeks in three straight games. The Miami Dolphins have allowed the second-most yards per carry over expectation to opposing quarterbacks, as well.

Cordarrelle Patterson is expected to return to be the lead in a backfield committee for the Atlanta Falcons, thus pushing Tyler Allgeier into Tier 3.

Chuba Hubbard (12%) has a half projection. After D’Onta Foreman’s productive game in Week 8, he could have earned a substantial role. If Hubbard plays and Foreman’s workload is scaled back to a committee level, then Foreman rates out at 41%.

We’re probably going to have to make some shaky starts this week at running back. The top tier is pretty large, but after that, things drop off quickly, and Tier 2 is tiny as a result.

In Week 8, Michael Carter had a majority role in the New York Jets’ backfield, yet James Robinson will have another week to get acclimated to the offense. That makes Carter’s role a bit tenuous. Carter did have a 55.2% snap rate in Week 8 with Ty Johnson behind him at 32.8% and Robinson at 20.7%. Despite the snap discrepancy, Carter only narrowly beat out Robinson in carries (seven to five), though he did have a strong lead in targets (7 of 10 running back targets). Although the Jets — as big underdogs — could lean on Carter again as a receiver, he’s clearly not going to be a one-for-one replacement for Breece Hall.

After a Week 8 bye, the Kansas City Chiefs’ trio is back on the board, and with the Week 9 byes and with injuries around the NFL, we may need to take a look. We just may not love what we see. In Week 7 — when Isiah Pacheco was deemed the new starter — it was actually Jerick McKinnon who led in snaps (39.7%) over Pacheco (31.0%) and Clyde Edwards-Helaire (29.3%). Pacheco led with 8 of the 16 carries between them; McKinnon led with three of the four targets. Edwards-Helaire had both red zone carries. It’s an avoid situation if possible. How bad is it? That’s what the simulation numbers can help tell us.

Jamaal Williams remained in the Detroit Lions’ backfield last week even with D’Andre Swift back. Williams handled 10 of 17 running back carries and three of four red zone carries while playing just seven fewer snaps (22) than Swift (29). It seems as though Williams will remain relevant in the backfield in the short term. The Green Bay Packers rank 31st in rushing success rate and 30th in rushing yards over expectation per carry allowed to opposing backs.

Cooper Kupp is 80% at a full projection and 31% at a half projection.

Allen Lazard is projected at a half workload. Both Michael Thomas and Jarvis Landry are considered half.

Rashod Bateman is presumed out.

The first glimpse of Michael Pittman with Sam Ehlinger under center was both good and bad. The good: he had nine targets (a 39.1% target share), including three targets that were at least 10 yards downfield. The bad: he had just 53 yards on those nine targets, and the Indianapolis Colts maintained a pass rate over expectation of -8.7%. There are pros and cons for Pittman, who faces the New England Patriots. New England ranks 11th against receivers in adjusted fantasy points per target. Ultimately, he’s a high Tier 2 play, thanks to the dedicated volume from last week.

Romeo Doubs’ stock is up and down. The rookie has had target totals of five, three, eight, eight, five, nine, four, and seven in his eight games and has maxed out at just 73 receiving yards despite largely steady volume in recent weeks. Doubs’ past two games display the flex-worthy dilemma. Doubs, in Week 7, didn’t catch any of his four targets. Last week, he caught four of seven targets for 62 yards and a spectacular score. Since Week 3, Doubs’ low-water mark in route rate is 87.5%, so he’s involved for a Packers team that now draws the 26th-ranked receiver defense by adjusted fantasy points per target: the Lions. It seems like a very telling week for Doubs. If Doubs can convert in this spot, our trust levels can grow. If not, then perhaps we look to keep him benched as often as our lineup deems possible.

Garrett Wilson has become a constant for the New York Jets offense, and he took a noticeable stride in the first week without Breece Hall. Wilson ran 41 of 42 possible routes and churned out a 20.6% target share (seven targets) for 115 yards. The overwhelming odds are that the Jets will be playing from behind against the Bills this week. In that sample, the Jets rank 22nd in pass rate over expectation (-4.4%). They do, however, have a top-five overall pass rate (69.1%) since Week 4 when trailing by any amount. We still want efficiency for our pass-catchers so that red zone trips make touchdowns more likely, yet Wilson seems to be set as the top option for New York going forward — with no other receiver particularly close.

We may have wanted to bench Kyle Pitts at times this season, but in reality, he has been only a flashy sit recommendation. Pitts has seen his role change noticeably in recent weeks. From Week 1 through Week 6, Pitts had a target share of 23.1% (5.0 per game), an average depth of target of 13.6 yards downfield, and 2.8 downfield targets (10-plus air yards) per game. Pitts, over his past two games, now has a team-high 35.0% target share (7.0 per game), but the depth is down (6.1 yards on average), and he’s been targeted on 35.9% of his routes — up 9.0 points from the earlier split.

Gerald Everett has a chance to see a role improvement, as well, with Mike Williams sidelined. Everett is already involved in the offense (15.2% target share for 6.4 targets per game) and actually is one of only nine tight ends to average at least 2.0 downfield targets per game (he’s ninth at 2.1). The Atlanta Falcons’ defense hasn’t been tested much at tight end, and while Everett isn’t an elite player, he has the ability to take advantage of the opportunity.

How about another Jets discussion? Tyler Conklin’s role was really impressive in Week 8. He led the Jets in targets (10, which was a 29.4% target share), and he turned that into 79 yards. Perhaps more impressively, he had a 15.3-yard average depth of target, and 7 of his 10 targets were at least 10 yards downfield. Conklin also accounted for three of four end zone targets available in the offense. Again, we need touchdown chances for that to matter, and the Jets’ offensive expectations are about as low as any team as huge underdogs. However, it seems as if this passing offense is going to be set on Conklin and Garrett Wilson for the time being.