With Fuller back, Dolphins' top WRs are all on the field 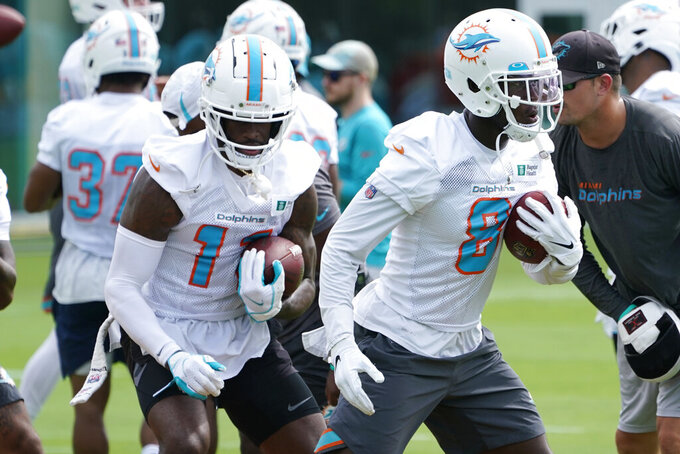 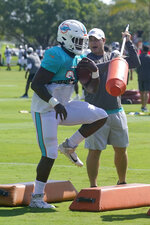 Will Fuller took part in a walkthrough, his first appearance since he left the first practice of camp with an undisclosed injury. He was joined by the other wideouts listed with the first team on the depth chart, DeVante Parker and Albert Wilson, who each had missed more than a week of practice because of injuries.

Fuller said it was important for him to start hearing play calls from quarterback Tua Tagovailoa.

“I’ve been hearing it in meetings, but it’s different when you’re out there and you actually have to go to your spot — just knocking that rust off with hearing a play from him and just playing fast," Fuller said. "It’s going to be a fun year.”

Fuller joined the Dolphins as an unrestricted free agent in the offseason after five years with the Houston Texans. He’ll miss the season opener at the New England Patriots to serve the final game of a six-game NFL suspension he was assessed last year for violating the league’s policy against performance-enhancers.

Wilson is back in 2021 after opting out last season.

The injury-plagued Parker has led the Dolphins in receptions each of the past three years, but has played all 16 games only once since arriving as a first-round pick in 2015. He began camp on the physically unable to perform list and was activated Aug. 2 before being sidelined again.

Parker said it was good to get back to practice to work on his timing with Tagovailoa, who has had a strong camp as he prepares for his second NFL season.

“We put in a lot of work during the offseason,” Parker said. “This is a big part of what we need, me and everyone else also. And then you’ve seen the difference with him and how he’s been this year.”

In Saturday's exhibition game against Atlanta, the Dolphins were without Parker, Fuller and Wilson, as well as wide receivers Preston Williams, Isaiah Ford and Lynn Bowden Jr.

On Tuesday, Williams took part in his second practice since being removed from the physically unable to perform list. Bowden was placed on injured reserve, and Ford was released as the Dolphins reached the 80-player roster limit.