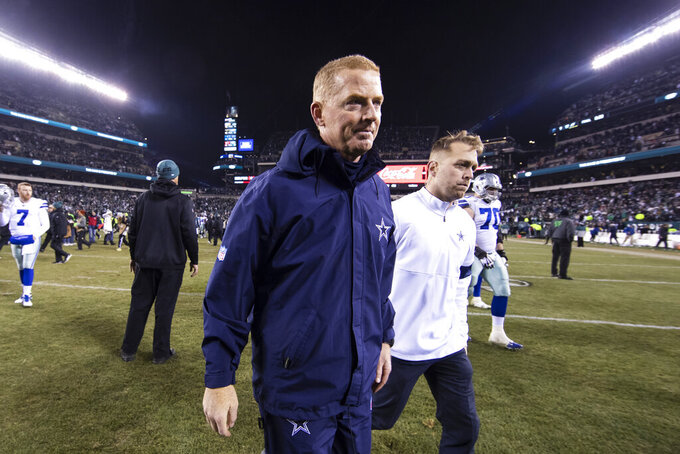 FRISCO, Texas (AP) — Jason Garrett was still coach of the Dallas Cowboys on Friday, almost a week after what figured to be a make-or-break season ended without a trip to the playoffs in the final year of his contract.

Garrett has been at team headquarters off and on since the season ended, according to two people familiar with the situation.

And while it “certainly feels like he will not be back,” as one person said, there was still uncertainty as to what owner Jerry Jones would decide in part because it was “dragging out the way it is.” Friday was the fifth day without a resolution publicly since the season finale.

The people spoke to The Associated Press on condition of anonymity because the club isn’t commenting on the status of Garrett, whose contract expires Jan. 14.

After Jones and his son, executive vice president of personnel Stephen Jones, canceled regular weekly radio appearances early in the week, the team posted an item on its website Friday headlined, “As week concludes, still no update on staff.”

The Cowboys finished the regular season with a 47-16 win over Washington for an 8-8 record, but the 2018 NFC East champions were eliminated from the postseason when Philadelphia won the division by beating the New York Giants 34-17.

Dallas gave up control of its playoff fate with a 17-9 loss at the Eagles in Week 16, the lowest moment in a season full of them after a 3-0 start fueled expectations that were already high.

It was the sixth time in nine full seasons under Garrett that the Cowboys missed the playoffs, and the 53-year-old hasn’t been able to end the franchise’s nearly 25-year run without getting past the divisional round of the playoffs.

The first Monday after the season was different in that Garrett didn’t meet with reporters while conducting his usual exit interviews with players before an afternoon meeting with the Joneses. The exit interviews lingered past Monday.

The decision figured to be a difficult one for Jones, who hired Garrett as offensive coordinator before naming Wade Phillips coach in 2007. Garrett was a backup to three-time Super Bowl-winning quarterback Troy Aikman in the 1990s.

When the Cowboys started 1-7 in 2010, Jones fired Phillips and gave Garrett the interim role. When Dallas finished the season 5-3, it was almost a foregone conclusion that Garrett would get the permanent job.

His first three full seasons ended at 8-8 with losses in finales that kept Dallas out of the playoffs.

Although Garrett reached the playoffs three times with a pair of wild-card victories in the next five years, Stephen Jones made it clear throughout this season that the Cowboys needed to break through and reach at least the NFC championship game for the first time since the last of five Super Bowl titles to finish the 1995 season.

Instead, Dallas followed the 3-0 start with the first of two three-game losing streaks. The NFL's No. 1 offense played a big part in a plus-113 scoring margin, but that ended up being a badge of shame. It tied for the second-highest margin in NFL history for a team that finished .500 or worse.

Despite never winning more than one playoff game in a season, Garrett has the club’s second-longest tenure behind Tom Landry, the Hall of Fame coach who led Dallas for the franchise’s first 29 seasons and won two Super Bowls before Jones fired him when he bought the team in 1989. Garrett's record is 87-70, playoffs included.