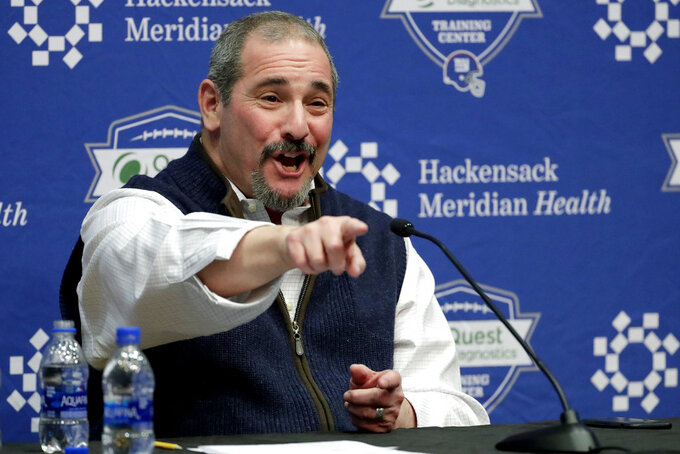 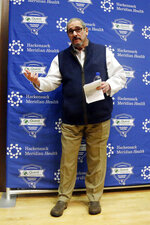 The general manager and the two-time Super Bowl MVP had a no-holds barred conversion about Manning's future Monday after the team missed the playoffs for the sixth time in seven seasons.

Gettleman would not say Wednesday whether the quarterback, who will turn 38 on Thursday, would be back for a 16th season.

Manning's $23 million salary cap hit will play a role in the decision, but the bottom line is Gettleman will do what is in the best interests of the Giants (5-11).

"He came in and he wanted to talk," Gettleman said of the conversation. "I have a crazy idea that if a guy asks me questions, I'm going to be honest with him. He wasn't called to the principal's office. He came to see me."

Manning, who has a year left on an $84 million contract, threw for 4,299 yards, 21 touchdowns and 11 interceptions this past season despite being sacked a career-high 47 times. His completion percentage (66) was the highest of his career.

"Once we got rolling, once everybody got comfortable with the offense, if you're going to look at stats, it wasn't too shabby what (he) did," Gettleman said of Manning. "He still can make the NFL throws, you know what I'm saying? He's still got it."

There is no doubt Gettleman respects Manning, who he called a "mensch." It's a Yiddish word meaning "a person of integrity and honor."

"There's no deviousness, there's no duplicitousness, none of that stuff. He's a mensch. Someday, I hope to be a mensch," Gettleman said.

The question is whether Manning is the best choice to lead the Giants to victory and Gettleman plans to watch plenty of videotape and talk to his coaches and scouting staff in coming to a decision.

In a news conference that lasted more than 30 minutes, Gettleman said he liked the direction the Giants are headed. The dissention-ridden locker room from last season (3-13) was cleaned out, leaving only 13 players on the final roster.

Among other topics Gettleman touched on:

— He said the offense overcame early season woes to lead the NFC East in scoring, but the defensive play needed to improve.

— Gettleman said the Giants didn't re-sign receiver Odell Beckham Jr. to a five-year, $90 million before the season to trade him.

— A recent survivor of a bout with cancer, Gettleman was certain he made the right choice drafting running back Saquon Barkley with the second pick overall instead of taking a young quarterback.

— The veteran general manager also was happy with Pat Shurmur's first season as coach, particularly after a 1-7 start.

— Gettleman would not comment on the status of cornerback Janoris Jenkins and linebacker Olivier Vernon. Both are under contract but each could be a salary cap casualty.

"We're going to look at film, we're going to evaluate everything. Everything is on the table for us," Gettleman said.

— Looking forward to this year's draft, Gettleman has no intention of forcing a pick, such as taking a quarterback early because of Manning's age or a team need.

Manning's father, Archie, recently said his son can't go through another losing season. Gettleman found it humorous when asked it he could guarantee a winning team next season.

"Really and truly, can anybody guarantee anything like that? Really?" he said. "All you Yankee fans thought you were going to win 162 games this year (laughter). I knew better. All kidding aside, you can't guarantee that. There's no way. I wouldn't guarantee that to anybody."

Gettleman believes he heads into this offseason with a better understanding of what Shurmur and his coaches need in terms of players.

While the offense was his focus heading into the offseason last year, the defense will occupy that spot now.

Despite not making the playoffs, Gettleman does not see this as a rebuilding season. He actually hates the word.

"You just keep going, you just keep building. It's really what we're doing here," Gettleman said. "We're doing our best to accumulate the talent that fits our schemes, and that understands how to play the game, and hates to lose. That's what it's really all about, and we're going to continue to do this and get it right. We're going to fix it."