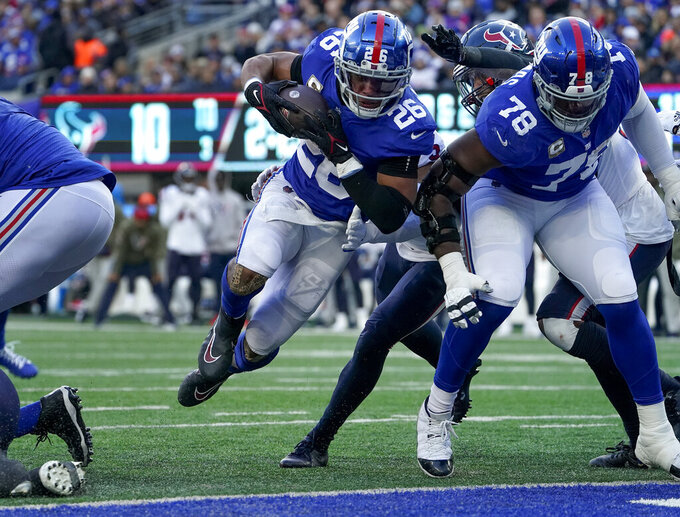 New York Giants running back Saquon Barkley (26) crosses the goal line for a touchdown against the Houston Texans during the third quarter of an NFL football game, Sunday, Nov. 13, 2022, in East Rutherford, N.J. (AP Photo/John Minchillo)

Some of our usual scoring stars are off the map because of injuries sustained in Week 10, but we’ve still got plenty of options going into Week 11 of the NFL season. These are the best bets to score.

Robinson isn’t the most explosive back, but he does know his way into the end zone. He got 26 carries and a score in a win against the previously undefeated Eagles in Week 10, so don’t expect the Commanders to deviate from this game plan, especially up against the Texans, our absolute best matchup for opposing RBs.

Barkley is the biggest part of the Giants offense, scoring a TD in six of nine games this season, including four of the past five games. He stays on the field more than most backs in the league at an 80% snap count over the past month. This week he’ll take on Detroit, our sixth-best matchup for opposing backs, and with -200 odds to score, Barkley is likely to find the end zone sooner or later.

Henry is expected to score against the Packers this week. The only question is going to be how many times. Green Bay defends the pass well on average, ranking in the top 10 in defending WRs and QBs, but they’re the 11th-best matchup for opposing runners. Don’t just take my word about Henry’s chances to score though, as Henry has -275 odds to find the end zone on Thursday night. Those are the best odds for any NFL player to score this week.

Watson broke out in Week 10, scoring three times against Dallas' defense. This week he’ll face a Titans defense that is the seventh-worst matchup for opposing RBs, but the third-best matchup for opposing WRs. It also helps his chances that fellow rookie WR Romeo Doubs is unlikely to play on the short week with an ankle injury.

Only Davante Adams has more receiving TDs (eight) than Diggs (seven) at the WR position, but Adams doesn’t have a top 10, or even 20, matchup this week. Diggs, on the other hand, is going up against the Browns, our 10th-best matchup on the week for WRs. On the field for 92% of snaps in Week 10, Diggs has -135 odds to score this week, the best odds for any receiver.

Lamb had the best game of his season thus far in Week 10, catching 11 passes for 150 yards and two scores. He’ll look to better that line this week against Minnesota, our fifth-best matchup for opposing WRs. I expect fireworks again this week, as this game is shaping up to be a shootout. Lamb has excellent -105 odds to find the end zone for at least the sixth time this season.