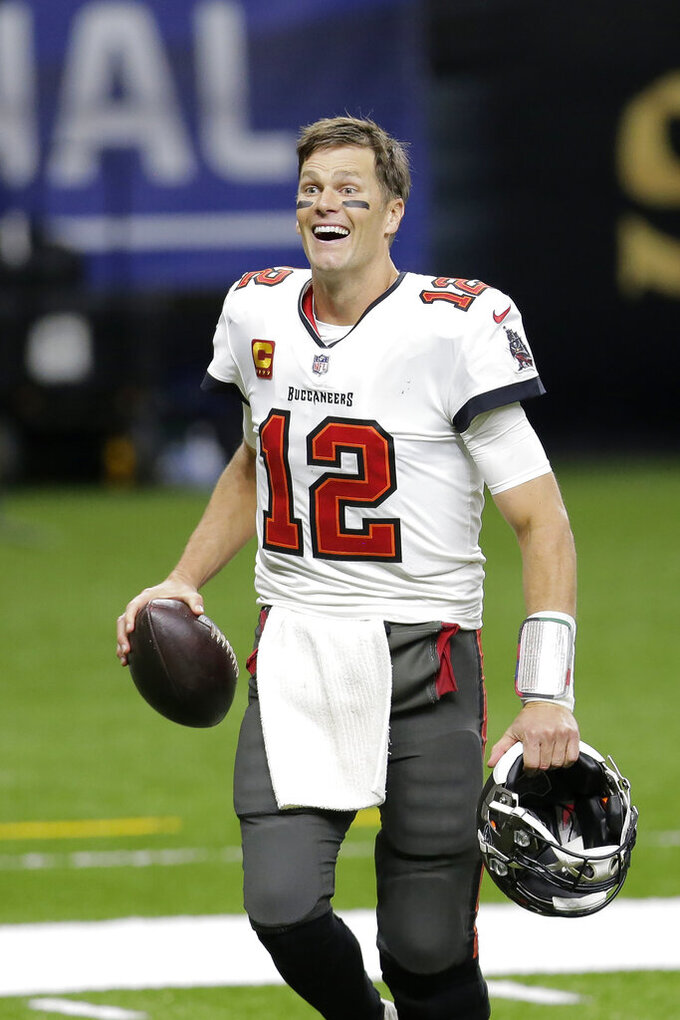 FILE - Tampa Bay Buccaneers quarterback Tom Brady smiles after an NFL divisional round playoff football game against the New Orleans Saints in New Orleans, in this Sunday, Jan. 17, 2021, file photo. The Buccaneers won 30-20. Reporters who covered Tom Brady for two decades in New England rarely expected anything enlightening or entertaining to emerge from the quarterback’s mouth. Keep to the straight and narrow, reveal nothing about yourself or your team, and just win. So when Brady began cracking wise as a Tampa Bay quarterback and, once again, as a Super Bowl MVP, people took notice. (AP Photo/Brett Duke, File)

How about current New York Giants defensive back Logan Ryan, who made the pick-six in the closing seconds of the Tennessee Titans' 20-13 win over New England in the opening round of the playoffs on Jan. 4, 2020.

Ryan still has the ball in his home, and he talked about the play Friday with Brady returning to Massachusetts to face Bill Belichick and the New England Patriots for the first time since leaving. Brady signed with the Buccaneers for the 2020 season and took them to a Super Bowl title.

“It’s funny,” Ryan said after the Giants (0-3) finished practice for Sunday's game at New Orleans (2-1). “The ball was just laying around my house because I don’t really do a lot with my stuff, like I’m not egotistical and have just portraits of me all over the place in my house ... so my kids, like, kick the ball around.”

Ryan then laughed and noted his care for the ball was altered when he saw one of Brady's autographed cards “going for like a million dollars.”

Ryan and Brady spent four seasons together on the Patriots and won two Super Bowls. Brady has now won seven, including last year's one-sided win over the Chiefs.

Ryan spoke to Brady during the recent offseason and suggested they auction off the ball. The proceeds would be split by their charities.

Ryan started laughing when asked if Brady might want the ball back.

Ryan quipped the ball might go to the Pro Football Hall of Fame and then he could be a little asterisk on the plaque.

GIANTS NOTES: Joe Judge, a member of the Patriots' staff before being becoming Giants coach, said starting receivers Sterling Shepard and Darius Slayton will miss the Saints game with hamstring injuries. Rookie wideout Kadarius Toney, the team's first-round draft pick, should get more action. ... New York will have its fourth left guard in as many games with Ben Bredeson out with a hand injury. Expect Matt Skura to start. ... Judge would not disclose how much tackle Isaiah Wilson weighed when he reported to the team after being signed to the practice squad. The 2020 first-round pick of Tennessee has been traded by the Titans and waived by Miami because of issues on and off the field, including an arrest in January following a high-speed chase. “So for any player that comes in here, you’ve got a fresh start. All we care about is what you do here on a daily basis,” Judge said.