Giants' Judge says sacrifice needed for NFL to have season 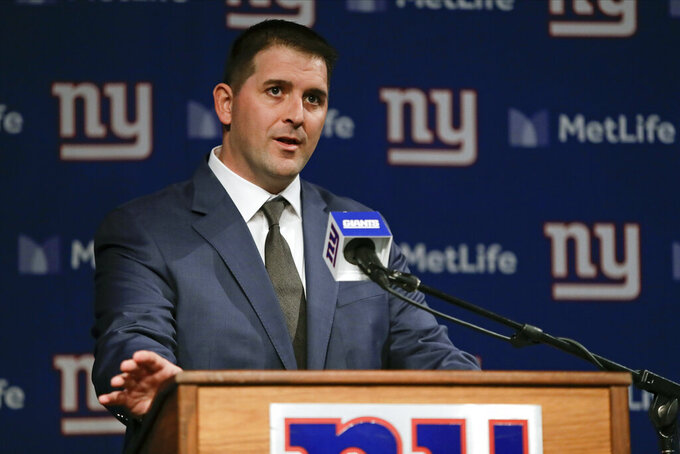 FILE - In this Jan. 9, 2020, file photo, New York Giants coach Joe Judge speaks during a news conference in East Rutherford, N.J. Since taking over as the New York Giants coach in January, Joe Judge has made the team and its welfare his main focus. His approach to being the head guy for the first time was to be prepared, demanding, disciplined and ready to adjust. (AP Photo/Frank Franklin II, File)

New York Giants coach Joe Judge believes the NFL players and coaches will have to sacrifice if the league is going to have a season in the midst of the coronavirus pandemic.

Speaking to the media Friday for the first time since players started reporting to training camp, Judge refused to discuss either individual players or second-year cornerback DeAndre Baker's legal problems. He said the release of 2018 Pro Bowl placekicker Aldrick Rosas following a hit-and-run accident was in the best interest of the team.

Judge again voiced his support for left tackle Nate Solder's decision to opt out of the season because of health concerns during the pandemic.

Heading into his first season as a head coach, the former New England Patriots special teams coordinator said the unusual nature of this season will not be an excuse for his team. The Giants will adapt and be prepared for any eventuality, including either players or coaches testing positive for COVID-19.

Judge hopes that never happen, of course, but he insists the Giants and every team and player in the league have to work to prevent any outbreaks. He strongly believes following the agreed protocols adopted by the league and players' union are essential.

“The thing I have said to my team is we have to make responsible decisions, always,” Judge said. “For me personally, it’s not just where I go around my house, but I’ve got to be conscious of where my wife, children, you know, who are they around?

“There are some sacrifices we have to make," Judge continued. "Everybody’s made sacrifices to get to this level. If the biggest thing we have to do for half the year is wear masks around each other, distance a little bit, and when we go home, be home — I think that’s a pretty fair trade off to be able to be part of the National Football League.”

Players are currently quarantined in hotels while awaiting the results of repeated COVID-19 testing. They won't be allowed into the team facility until passing those tests.

Obviously a problem for the NFL would be a spike in cases, what baseball is going through, particularly with the Miami Marlins. They have missed a week of play in a 60-game season. An outbreak could endanger any season in any sport. The NFL has rules that require players to stay away from large crowds and to wear face masks.

Since being hired to succeed the fired Pat Shurmur in January, Judge has not had the chance to physically stand in front of his team and address it. He has spoken to some players and held virtual team meetings with the entire group to tell them what he expects. It certainly isn't another 4-12 season for a franchise that has been to the playoffs once since winning the Super Bowl in February 2012.

Under the labor agreement between the players' union and the NFL, the first practices for this season won't take place until mid-August. There will be 14 overall, with 10 in pads.

Judge wants to have scrimmages for some of those just to get his team ready for the regular season.

“A lot of things have to be done in a short period of time,” he said. "We have to make good evaluations as coaches, I’ve got to set up practices and make sure we can evaluate guys at multiple positions, and we gotta make sure that we do a good job of seeing what every player does when he understands what to do when the play is fastest. That’s our job as coaches to teach them.”

Rosas, who kicked for the Giants the past three years and was coming off a poor season, was released earlier this week. Former Jets kicker Chandler Catanzaro was signed.

Baker, one of three first-round draft picks in 2019 and an anticipated starter at cornerback, was placed on the commissioner’s exempt list this week. He was arrested on armed robbery and aggravated assault charges in Florida in the offseason. He pleaded innocent.

“He’s not on our 90-man roster, currently he’s on the exempt list. I’ll let the league deal with that issue,” Judge said.

NOTES: Judge agreed it will be harder adding players to the roster this season because of the rule that mandates new players must isolate for a week before joining a new team. ... While some teams have discussed quarantining either their starting or backup quarterbacks to keep them virus free, Judge said he won't do that.