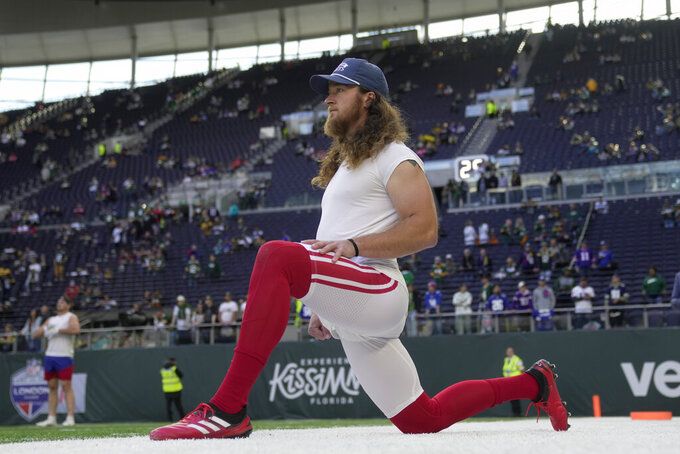 EAST RUTHERFORD, N.J. (AP) — New York Giants punter Jamie Gillan has left the United Kingdom and is returning to the United States after having a visa issue resolved.

Gillan, who was born in Scotland, departed from London on Wednesday and is expected back in the U.S. for practice on Thursday, the team said.

Gillan was forced to remain in the U.K. for three extra days after the Giants’ 27-22 win over the Green Bay Packers on Sunday. He entered the U.S. as a teenager with his father with a NATO visa. His father was a member of the Royal Air Force.

The younger Gillan never changed the visa to a work visa when he got a job in the NFL. Coach Brian Daboll said the Giants were aware of the problem and understood the punter might not be able to leave Sunday after the game. Gillan got the new documents and was able to leave Wednesday.

Giants kicker Graham Gano and long snapper Casey Kreiter had some fun with their teammate's extra time abroad. They wore T-shirts in the locker room after practice with “Free Jamie” written in dark ink. Gano put a Scottish flag under his message.

Being a punter, Gillan could easily practice only one day this week and be ready for Sunday's home game against the Baltimore Ravens (3-2).