Giants RB Saquon Barkley and 3 others in COVID-19 protocol 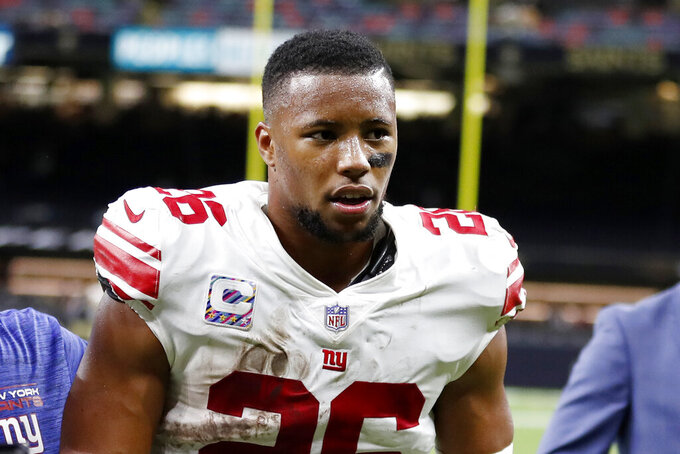 FILE - In this Sunday, Oct. 3, 2021, file photo, New York Giants running back Saquon Barkley (26) walks off the field after an NFL football game against the New Orleans Saints in New Orleans. The talented fourth-year running back is probably going to miss at least a game or two after spraining his left ankle on a fluke play early in the Giants 44-20 loss to the Dallas Cowboys on Sunday. (AP Photo/Tyler Kaufman, File)

EAST RUTHERFORD, N.J. (AP) — New York Giants injured star running Saquon Barkley and two other starters did not practice Wednesday after being placed in the COVID-19 protocol along with assistant coach Burton Burns.

Safety Xavier McKinney and left guard Matt Skura also did not practice because of the virus which was detected on Tuesday after the team returned from a game in Kansas City against the Chiefs the previous night.

Because of the results, the Giants required all players, coaches, team personnel and management to retest on Wednesday.

Barkley, who has missed the past three games with an ankle injury, McKinney and Skura were placed in the protocol after they tested positive on Wednesday.

The players took a polymerase chain reaction test after the positive test to detect the genetic material of the virus. The results of that molecular test will be known Wednesday. They would then be tested again Thursday and the result would determine a course of action.

Safety Logan Ryan said players are looking at this as the norm for the 2020-2021 NFL seasons, which have been affected by the pandemic that emerged in early 2020. Players wear tracing monitors every day when they are at the team facilities and are tested often.

“When something like this comes up, I don't know how the results will come back. I'm not going to lose sleep on it. With all we experienced last season it's a different type of football than the last couple of years and you have to be able to adjust on the fly.”

Burns, who turned 69 last week, and his wife are staying in their condo, Judge said. He would not say whether the coach was experiencing any symptoms.

"As I told Burton, I said the one thing about this whole deal is you don’t have to go somewhere to get it, it can come to you," Judge said. “You never know where it goes. So we’ve just got to do a good job of just staying up on symptoms, reporting symptoms.”

The Giants (2-6) were supposed to start practicing for Sunday's game at MetLife Stadium at 11:10 a.m. on Wednesday. The workout started around 11:45. Some players did not practice because of injuries and others because of the COVID-19 protocols.

There was a line of about 20 players waiting to be tested at a trailer around 10:45 a.m. General manager Dave Gettleman also showed up to be tested.

Judge said the majority of Giants players are vaccinated. He would not say how many are not. The NFL requires team personnel to be vaccinated.