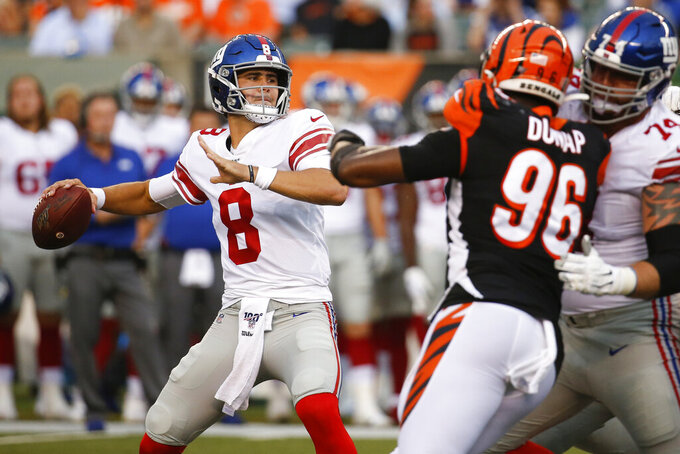 EAST RUTHERFORD, N.J. (AP) — New York Giants wide receiver Sterling Shepard said he knew he had a concussion in the season opener against Dallas but played to try to help the team win.

Speaking on Friday for the first time since sustaining the concussion on Sept. 8, Shepard said he didn't start feeling normal until this week.

Shepard played the entire game in the 35-17 loss to the Cowboys. The team seemingly didn't find out about the concussion until after the game in the locker room. Shepard was sidelined in the 28-14 loss to the Buffalo Bills at home last weekend.

The four-year receiver practiced this week and is expected to play Sunday when the Giants (0-2) face the Buccaneers (1-1) in Tampa, Florida.

The NFL is trying to determine why spotters tasked with looking for players hurt during games didn't see Shepard was injured in the third quarter. The spotters and medical personnel can have a player taken off the field if they suspect a possible concussion.

"They tried to send someone in there for me and I just kind of waved them off," Shepard said. "Ultimately, it's my decision, I guess, to say to stay in."

Shepard said it took him a few plays until he felt OK, but he realized he probably was dealing with a concussion.

When asked why he stayed in and why he would risk his health, Shepard seemed uncertain.

"It was an in-the-moment decision," he said. "I felt like I wanted to stay in and help my boys out, so that's why I did it."

Shepard said he passed all the concussion tests the day after the game, but he didn't start feeling good to Sunday or Monday.

Coach Pat Shurmur said Shepard's concussion was being investigated "behind the scenes" and he couldn't answer any questions.

Shepard became the Giants' go-to receiver with the offseason trade of Odell Beckham Jr. to Cleveland.

Shepard didn't have any reps with Jones in the preseason because he broke his thumb on the first day of practice in training camp.

The 26-year-old Shepard has played almost all his career with Manning as his quarterback. He felt Manning played well this season but the team didn't do enough to win.

Shepard caught passes with Jones after practice Friday. He said the rookie throws the ball a little harder than Manning and offers the option to run with the ball.

Shepard had six receptions for 42 yards against Dallas.

"I didn't feel good last week, sitting there watching my boys go out and play," Shepard said. "So I am excited to be back out there on the field with my boys."

NOTES: Shurmur said Manning would back up Jones on Sunday. ... Receivers used to hold a meeting with Manning after practice on the Friday before the game. The receivers were in the locker after practice. Jones will probably decide if and when he wants to meet with the receivers.