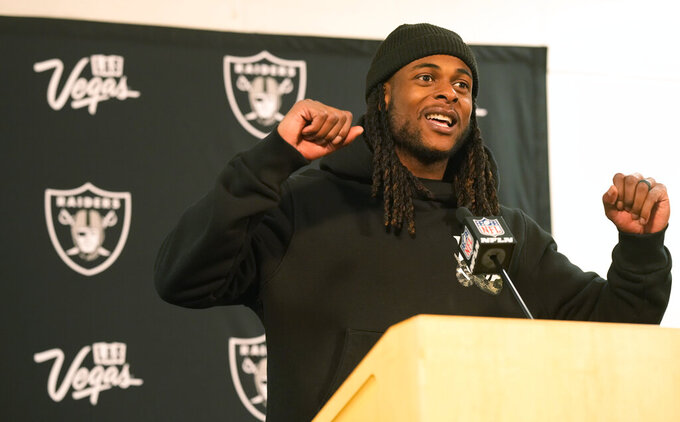 DENVER (AP) — To spark a sputtering offense, first-year Broncos coach Nathaniel Hackett took himself out of the play-calling role.

His handoff, though, didn't gain much ground. Same as all season.

In his new position of calling plays, quarterbacks coach and passing game coordinator Klint Kubiak couldn't provide the blueprint Sunday to unlock vintage Russell Wilson as the Broncos tumbled 22-16 in overtime to the Las Vegas Raiders.

Their sixth one-score loss dropped the Broncos to 3-7 and pushed them closer to a sixth straight losing season and seventh year without a playoff berth. It also kept the heat on Hackett.

“I thought that would help us and so I wanted to be sure I had that opportunity to give that to him,” Hackett said of relinquishing his play-calling duties to Kubiak. “We need to keep looking at all the different things that we’re doing.”

The reason for the switch was simple: The Broncos entered the game against the Raiders (3-7) with the league’s worst offense, one that's wasting a dominant defense that leads the NFL in several categories.

Early on, it looked as though Kubiak, who was calling the plays from upstairs, just might provide the necessary jumpstart as the Broncos scored an opening-drive touchdown for the first time under Wilson and jumped out to a 10-0 lead after two possessions.

The Broncos recovered but Crosby blocked Brandon McManus' 25-yard field goal try on the last play of the first half.

After the break — and much like all season — the Broncos' offense was stagnant. They had four punts sandwiched around two field goals and they were shut out in the third quarter for the seventh time this season.

Asked if he feels he's coaching for his job, Hackett said, "Whatever happens, those things I can’t control, and I always communicate with everybody, talk about everything. Show them all the different things that are going on so they can have all their questions answered, and go from there.”

Maybe the best illustration of how things went sideways was a play just after the 2-minute warning. Leading 16-13, Wilson and the offense faced third-and-10 at the Denver 34. The Raiders had no timeouts left, and Denver could've called a run play to take the clock to just over a minute. But Wilson rolled right and, with his receiver covered, threw an incompletion rather than sliding and burning more time off the clock before the Broncos punted.

It left more than enough time for Derek Carr and the Raiders to drive down the field to tie it on Daniel Carlson's 25-yard field goal with 16 seconds left.

In overtime, the Raiders won the coin toss and three plays later the game. A wide-open Davante Adams hauled in a 35-yard touchdown pass on a busted coverage — one of the few glaring mistakes this reliable defense has made all season.

First-year Raiders coach Josh McDaniels earned his second win this season over the Broncos, the team that fired him amid a slide in 2010.

“The bottom line is it sucks,” Broncos left guard Dalton Risner said. "We care a lot about our team and our teammates around us. We came short today.”

As they have all season.

Up until this week, Hackett refused to relinquish play-calling duties despite the team’s ineffective offense.

Placing Kubiak in charge was the second major move by Hackett. In September, he hired longtime NFL assistant coach Jerry Rosburg out of retirement to help him make game-day decisions after multiple communication breakdowns and several operational miscues.

Once again, Wilson and the offense managed just one touchdown Sunday, on a 1-yard run by Latavius Murray. That gives them 13 this season, including just seven TD throws by Wilson, who cost the Broncos three players, four prime draft picks and $165 million in guarantees as part of the five-year extension he signed prior to the season.