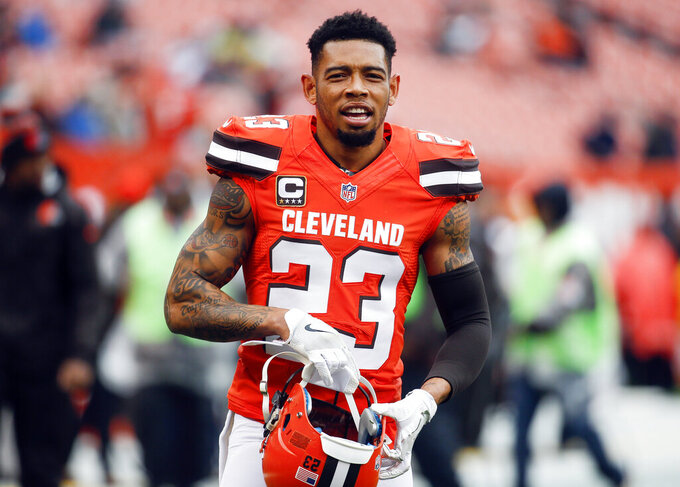 FILE - Cleveland Browns cornerback Joe Haden practices before an NFL football game against the New York Jets, on Oct. 30, 2016, in Cleveland. Haden has a formal NFL retirement date. The three-time Pro Bowl cornerback told The Associated Press he is planning to sign a one-day contract with Cleveland on Oct. 30 2022, so he can retire as a member of the team that drafted him in the first round in 2007. The Browns will honor the 33-year-old Haden a day later during their home game against Cincinnati on Monday Night Football. (AP Photo/Ron Schwane, File)

The three-time Pro Bowl cornerback told The Associated Press he is planning to sign a one-day contract with Cleveland on Oct. 30 so he can retire as a member of the team that drafted him in the first round in 2007. The Browns will honor the 33-year-old Haden a day later during their home game against Cincinnati on Monday Night Football.

Haden chose to call it quits in the city where he spent the first seven seasons (2010-16) of his professional career. He played for rival Pittsburgh from 2017 through last season.

“More roots,” Haden said before being formally inducted into the Florida Athletic Hall of Fame. “I was a kid. I was 21 years old, fresh and the city embraced me. I was going to all the Cavs games, so it’s more the city of Cleveland.”

Haden wore both college championship rings – one from the 2008 Southeastern Conference title and the other from the 2008 national title — on his index fingers during the ceremony inside Florida Field on Friday night.

“My fingers have gotten a little bigger so they’re on my pointers now,” he said.

Haden remains in great shape even though his daily routine has slowed significantly since he hung up his cleats. He’s a member at Lakeside Golf Club in Burbank, California, and plays with friends several times a week (he shot 86 on Thursday). His two kids are in preschool and kindergarten, but he still manages to squeeze in Lakers game regularly because “I’m a big LeBron fan.”

Haden wanted to play one more year and was training in L.A. in the offseason in preparation for the rigors of the NFL. But he couldn’t find the right fit because he wanted a chance at a Super Bowl ring – his rings fingers are available, after all – and refused to take a significant pay cut. He said teams continued to call throughout the summer.

“They’ve been calling,” he said. “I was really ready to play. I had a dollar number. I wasn’t going to play for free. That’s not what it’s about. It got to a point where they weren’t willing to offer me the number, so I’m happy, I’m healthy. I was with my kids and chilling. I’m ready for the next chapter.”

Haden was a productive and popular player during his time in Cleveland. He made 81 starts, played in 90 games and recorded 19 interceptions before the Browns released him before the 2017 season. He was active in the community as well, serving as a Special Olympics ambassador, hosting youth football camps and donating to the Greater Cleveland Food Bank.

After he was cut by the Browns, Haden quickly signed with the Steelers and played in 68 games before Pittsburgh decided not to re-sign him following last season. Haden had 10 picks with the Steelers.

The Browns selected Haden with the No. 7 pick overall pick in 2010 after he starred at Florida.