Haskins struggles in debut after replacing Keenum at QB 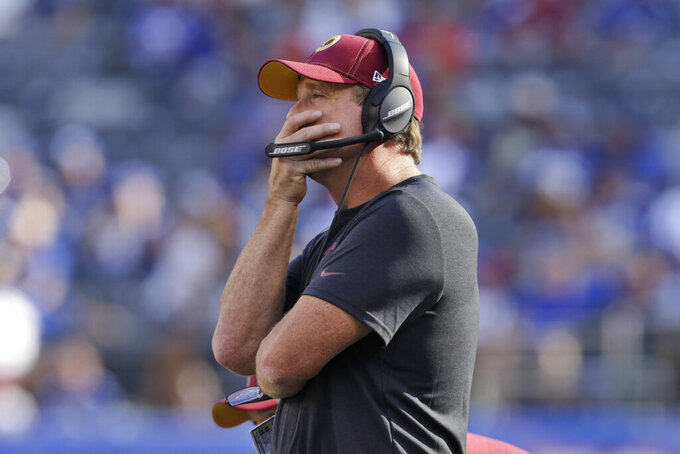 Washington is 0-4 after losing to the New York Giants 24-3. Coach Jay Gruden's job is in jeopardy and Haskins failed to provide a spark, finishing 9 of 17 for 107 yards and three interceptions, including one Jabrill Peppers returned 32 yards for a touchdown.

"I didn't execute the way I wanted to, but the good thing about it is that it hurts, and there (are) going to be brighter days tomorrow," said Haskins, the Ohio State product who was the No. 15 overall pick in the draft.

Searching for a spark with the Redskins trailing 14-0 midway through the second quarter, Gruden benched Case Keenum and brought on Haskins to run the show after Quinton Dunbar's second interception of the quarter gave Washington the ball at the New York 37.

For a couple of minutes, the decision looked great. The Redskins got a quick first down, Haskins completed a 6-yard pass to Trey Quinn for another first down, and he later scrambled 14 yards for a first-and-goal at the 1.

Haskins and the Redskins didn't score again, with three drives ending in interceptions, the last two by Janoris Jenkins.

"I had a whole bunch of emotions in my head," Haskins said of when offensive coordinator Kevin O'Connell told him he was going in. " just wanted to win the game and we didn't. ... On to next week."

Haskins does not know who will start next week. It is uncertain whether Gruden will be the coach when Washington plays host to the Super Bowl champion New England Patriots.

"If I feel like he gives us the best chance to win against New England, I'll put him in," Gruden said of Haskins. "That's the way it is at every position with everybody. You're just not handed the keys because of where you're drafted, you've got to earn the right. I think he will continue to get better, and better, and better."

"Of course, he had interceptions, but that's things he can tweak," Peterson said. "When you look at those plays, those shots he took downfield, the first one was a good defensive play. Of course, things could have been better. The tight end could have not stumbled, and Haskins could have thrown it a little better, but it was a hell of a play by Jenkins. I think he'll take a better look at them and come back better next week for sure."

Keenum, who battled a foot injury, was 6 of 11 for 37 yards with an interception when he was lifted. The pick on a deflection led to New York's first touchdown.

Keenum said he was surprised being lifted and agreed he was frustrated.

"I think we are all frustrated in this locker room; we all have to play better," he said. "It's a tough league. Every week. Everybody is really good and you can't do what we did on third down, have penalties, turn the ball over and expect to win. It just is what it is."

Washington's 176 offensive yards were the fewest allowed by the Giants since the Minnesota Vikings gained 164 yards on Dec. 13, 2010. The Redskins hurt themselves with 12 penalties for 58 yards.