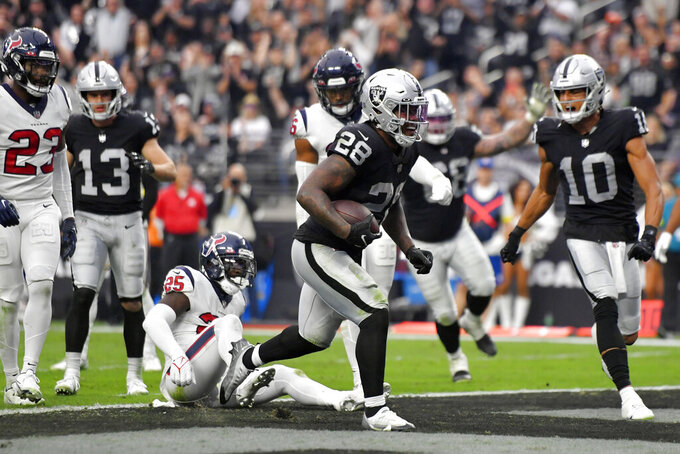 Las Vegas Raiders running back Josh Jacobs (28) scores a touchdown during the second half of an NFL football game against the Houston Texans, Sunday, Oct. 23, 2022, in Las Vegas. (AP Photo/David Becker)

HOUSTON (AP) — The Houston Texans followed up their only win of the season with their most lopsided loss.

Houston beat Jacksonville to get out of the winless column in Week 5, but couldn’t build on that success after its week off, falling apart in the fourth quarter in a 38-20 loss to Las Vegas on Sunday.

The Texans (1-4-1) led by three points entering the fourth quarter before the Raiders scored 21 straight points to roll to the victory.

The biggest problem in that quarter was Houston’s run defense, which allowed two touchdowns by Josh Jacobs. He had TD runs of 7 and 15 yards in the fourth to cap a game where he finished with 143 yards rushing and three scores.

Coach Lovie Smith was disappointed in the performance and said they’ll continue to focus on improving in that area.

“Believe me, it’s important to us,” he said. “And we’ll keep working, eventually we’ll get it right. It didn’t work (Sunday). I’m not sure what else to tell you besides that ... we didn’t play the run well ... and we’re going to work to get it right.”

Things won’t get any easier this week as the Texans host Tennessee and running back Derrick Henry, who ranks fourth in the NFL with 536 yards rushing this season.

“It’s the same thing each week,” Smith said. “You have to have good gap integrity, gap discipline. If you don’t, one person being not in it can cause you to give up an explosive run in that case.”

Henry has had plenty of explosive runs against the Texans over the years and they’ll have to find a way to shore up their run defense quickly if they hope to contain him Sunday.

While Houston’s run defense is poor, its running game has been solid because of the development of rookie Dameon Pierce. The fourth-round pick from Florida had 92 yards rushing Sunday to give him 504 this season to rank sixth in the NFL entering Monday.

Davis Mills had a season-high 302 yards passing, but was unable to lead the Texans to any points in the fourth quarter after they led entering the period. The second-year player threw an interception that was returned for a touchdown that helped the game get out of hand late.

Mills has thrown five interceptions combined in his past four games after not throwing any in the first two games.

TE Jordan Akins, who started the season on the practice squad, led Houston with a season-high 68 yards receiving Sunday.

Guard Kenyon Green, who was the 15th overall pick in this year’s draft, had a false start on fourth-and-1 early in the fourth quarter that forced the Texans to punt instead of going for it on fourth down. The Raiders scored on the ensuing drive to push their lead to 31-20.

41 — The Texans have been outscored by 41 points in the fourth quarter this season.

The Texans have a huge test Sunday when they host the AFC South-leading Titans, who have won four in a row after an 0-2 start.

“I would like to be talking of course on a win, but when you are disappointed, you like going into the division,” Smith said. “This will be the last division opponent we haven’t played, so we’re excited about playing them.”

It will be the first of two tough games in five days with the team getting a visit from the undefeated Eagles on Thursday, Nov. 3.