As injuries mount, Ravens' depth will be tested vs Titans 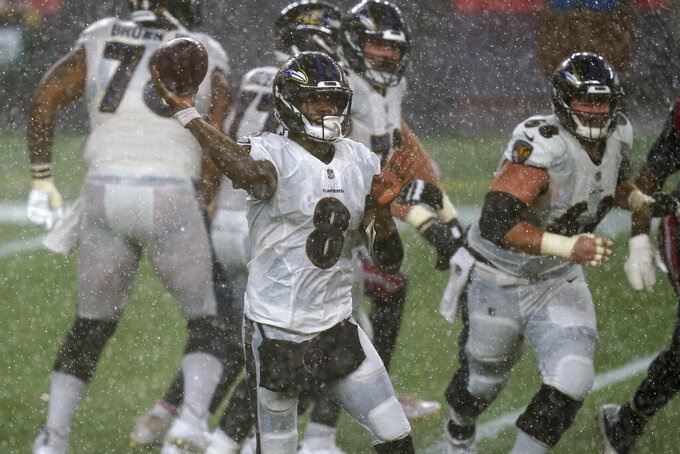 The Baltimore Ravens enter Sunday’s pivotal game against the Tennessee Titans with 11 players on injured reserve and several other key contributors too hurt to practice.

To top it all off, Nick Boyle sustained a season-ending knee injury against the Patriots, leaving one tight end on the roster.

The shortage of manpower will test Baltimore’s depth and resilience in a rematch of last January’s AFC divisional playoff.

“It’s a standard here with the Ravens: next man up,” rookie defensive tackle Justin Madubuike said Wednesday. “We’re all equipped to handle any situation when a guy goes down.”

Maybe so, but Baltimore (6-3) struggled stopping the run on a wet night in New England with Campbell sidelined and after Williams left in the first quarter. New England amassed 173 yards rushing, often plowing past backups Madubuike and Justin Ellis.

That does not bode well for a matchup against the Titans (6-3) and star running back Derrick Henry, who ran for 195 yards last January in Tennessee’s 28-12 upset of the Ravens.

“It comes down to doing your job and just being physical,” safety DeShon Elliott said. “Of course it’s going to be a challenge, but we’ve got some young guys here that are going to step up. They’ll be OK. They’ll be ready to go.”

On offense, the Ravens were able to survive for two weeks without starting running back Mark Ingram (ankle) because they’ve got two capable backups in Gus Edwards and rookie J.K. Dobbins. But there has been a constant shuffle up front since Stanley and guard Tyre Phillips (ankle) were placed on IR on Nov. 3.

“You’d rather have your five guys locked in from the beginning. That’s something that would be valuable,” coach John Harbaugh said. “We don’t have that right now. But we have enough players to be successful.”

Barely. Pro Bowl right tackle Orlando Brown Jr. moved across the line to fill in for Stanley, Patrick Mekari went to right guard and D.J. Fluker started at right tackle against New England. But Fluker was pulled during the game and Mekari moved to play tackle.

Ravens quarterback Lamar Jackson likes to run regardless of who lines up in front of him, but recently many of his downfield jaunts have come out of necessity rather than design.

“Our guys are playing pretty good. I’m 100% confident in our line,” Jackson maintained. “We got those NFL linemen for a reason. We’ve just to keep it going.”

Jackson loves throwing to tight ends Mark Andrews and Boyle, but his options were cut in half after Boyle went down. The Ravens had a surplus of tight ends before trading 2018 No. 1 draft pick Hayden Hurst to Atlanta during the offseason, and now they’re hoping the addition of free agent Luke Willson will fill the void.

Willson, 30, was signed Tuesday and assigned to the practice squad. If the former Seattle Seahawks starter can get in a good week of practice, there’s a chance he will be moved up to the 53-man roster and play on Sunday.

“We really like Luke. We played against him before,” Harbaugh said. “Good guy, experienced player. We’ll just have to see how he fits in to what we’re doing.”