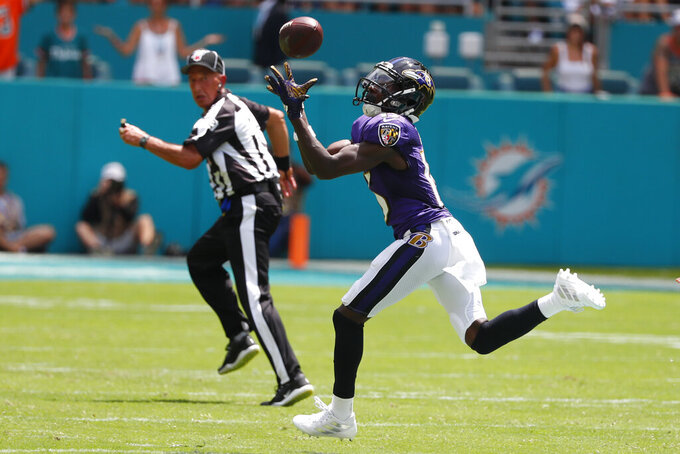 Baltimore Ravens wide receiver Marquise Brown (15) grabs a pass for a touchdown, during the first half at an NFL football game against the Miami Dolphins, Sunday, Sept. 8, 2019, in Miami Gardens, Fla. (AP Photo/Wilfredo Lee) 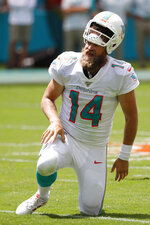 The South Florida native looked unstoppable from the start Sunday, and tied a Ravens record with five touchdown passes to help them humiliate the Miami Dolphins and rookie coach Brian Flores, 59-10.

When Jackson emerged from a jubilant locker room, he said the recipe for success was simple.

"The offensive line did a great job — I barely had pressure," he said. "And the receivers were getting open and catching the ball."

Baltimore gained 49 yards on the first play, a run by newcomer Mark Ingram, and hardly slowed down after that. Jeers began when the score reached 14-0, evidence of the impending avalanche already obvious.

Jackson's first nine passes, all completions, went for 204 yards and four touchdowns, including scores of 47 and 83 yards to first-round draft pick Marquise Brown in the first 11 minutes.

The performance should help dispel the impression Jackson is one-dimensional.

"Not bad for a running back," he said.

His other touchdown passes covered 33 yards to Willie Snead, 5 yards to rookie Miles Boykin and 1 yard to fullback Patrick Ricard. The performance was a big step forward for the Ravens in their transition from Joe Flacco to Jackson, who went 17 for 20 for 324 yards.

"For him to come down here — I was happy for him," coach John Harbaugh said. "I was impressed with his poise under pressure."

Brown, the cousin of NFL receiver Antonio Brown, made four catches for 147 yards.

Ingram, also making his Ravens debut, ran for 107 yards and two scores as Baltimore won its fourth opener in a row.

The rebuilding Dolphins are 0-1 for the first time since 2016, and their outlook has rarely seemed so gloomy. The blowout will only heighten speculation they're headed for a winless season under their new coach.

"It starts with me," Flores said. "I've got to do a better job of coaching this team."

He can take small consolation that a drubbing by Baltimore is nothing new. The Ravens have outscored the Dolphins 137-16 in three meetings since 2016.

The Ravens scored touchdowns on their first four possessions, and when they were finally forced to punt, Jakeem Grant fumbled the kick. Baltimore recovered at the 10 and scored again to make it 35-3.

"It's never good to be embarrassed like that," Miami quarterback Ryan Fitzpatrick said.

Once again, Harbaugh showed Miami no mercy. With a 35-3 lead late in the first half the Ravens faked a punt, and Anthony Levine took the short snap and ran 60 yards to set up another touchdown.

"It was there," Harbaugh said. "That's what we do. There was a lot of time left in the game. If they're going to give us an opportunity to run a play, we're going to execute it."

The Ravens' final touchdown came when Robert Griffin III threw for a score on fourth-and-3. Flores had no quarrel with either call.

"It's our job to stop them; it's not their job to let off," Flores said. "We're not looking for handouts here."

Fitzpatrick had little time to throw in his Dolphins debut, and he finished 14 for 29 for 185 yards and one score, with two sacks. Josh Rosen replaced Fitzpatrick to cheers late in the third quarter and went 1 for 3 for 5 yards with one interception.

Announced attendance was 65,012, including Jackson's family and friends. The actual crowd was about half that and could be a sign of things to come for Miami, with many South Floridians disenchanted about the direction of the franchise.

Ravens: CB Jimmy Smith hurt his right knee in the first half. An MRI was scheduled, and Harbaugh said the injury doesn't appear to be a long-term issue.

Dolphins: WR Albert Wilson was sidelined by a calf injury in the first half.

Ravens: Baltimore plays host to Arizona for the first time since 2011 next Sunday. It's the first meeting between the teams since 2015.

Dolphins: They play host next Sunday to the New England Patriots, who have lost their past two games in Miami. Last year the Dolphins won with a 52-yard pass and double lateral for a Kenyan Drake touchdown on the final play.