Jags get better Josh Allen in this meeting, beat Bills 9-6 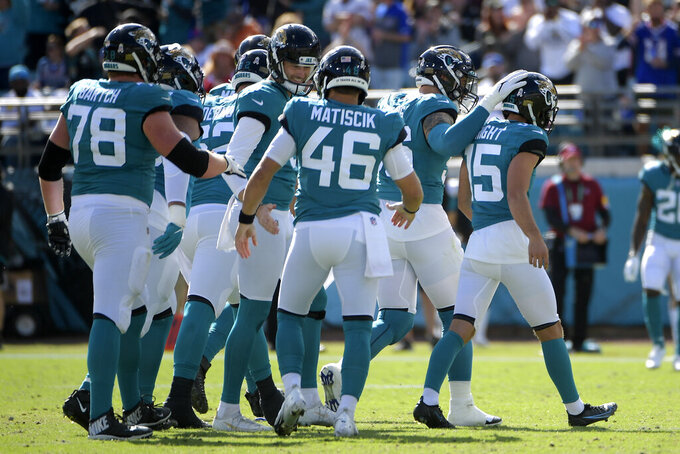 Jacksonville Jaguars place kicker Matthew Wright (15) walks off the field with teammates after kicking a field goal against the Buffalo Bills during the first half of an NFL football game, Sunday, Nov. 7, 2021, in Jacksonville, Fla. (AP Photo/Phelan M. Ebenhack)

He figured the white, No. 17 top with blue numbers and red trim worn by Buffalo quarterback Josh Allen would look good on a wall somewhere in his home, especially if it still has all those grass stains.

“I'm gonna get it, though,” Allen said confidently.

It could end up being a collectable, at least for the Jaguars.

Jacksonville had the better Allen on this Sunday, with the third-year pro intercepting a pass, making a sack and recovering a fumble in a 9-6 upset of the Bills that will go down as one of the best defensive efforts in franchise history.

“That's what we're supposed to do," Jacksonville's Allen said.

The Bills (5-3) lost for the second time in seven games, this one much more stunning than losing on the final play at Tennessee three weeks ago.

Allen completed 31 of 47 passes for 264 yards, with the two picks and a fumble. He also fumbled again late, but officials ruled his progress was stopped.

“We played like (crap) and it starts with me,” Allen said. “This loss stings, but we will be better because of it."

The Bills finished with 301 yards, but had 12 penalties for 118 yards and had to settle for a field goal after getting to the Jaguars 6-yard line on their opening possession.

“I was just looking on their sideline and one thing I know is I was like, ‘They don’t have the same energy as us,'" Jaguars cornerback Shaquill Griffin said. "If you feel like one team deserved this win, it’s us, but you’ve got to believe that.

"That’s one thing I kept preaching at everybody else. Look on the sidelines, watching them walking around, it’s like they don’t care. They don’t deserve this. Let’s show them why. So now we’ve got to continue that momentum.”

The game's most decisive moments came on Buffalo's final two drives: Allen fumbled on a third-and-2 play at the Jaguars 37 with a little more than 5 minutes remaining. Allen fumbled after getting pressured by Smoot. The other Allen recovered.

Buffalo got the ball back in the waning minutes and advanced to the Jaguars 39. But Smoot sacked Allen on third down. It was Jacksonville’s fourth sack of the day.

Allen's sack made NFL history. It was the first time a player sacked a quarterback with the same name since the league started counting sacks in 1982.

“Our defense today, that's the one of the best defensive performances I've seen,” Jaguars quarterback Trevor Lawrence said. “It just fun to watch. Really they put on their back.”

Allen and Allen had been looking forward to this meeting, their first since being selected with the seventh overall pick in consecutive NFL drafts. They have exchanged messages via social media, but never met in person.

The outcome was one few could have seen coming, especially considering Jacksonville looked lost on the West Coast a week ago and Buffalo had become the betting favorite to win the Super Bowl.

“We're going to build on this,” the winning Allen said.

Jaguars kicker Matt Wright missed three straight field-goal attempts – all left – in a matter of minutes in the third quarter.

Wright hit the left upright from 42 yards, but a false start penalty on the Jaguars gave him another chance from 47. He yanked that one left, too. But Bills reserve running back Taiwan Jones was flagged for running into the kicker – it probably should have been a roughing call – and Wright got one more chance.

He missed left again from 42 yards out.

Wright did have three field goals for all his team's points, hitting from 39, 55 and 21 yards.

Lawrence, the first overall pick in the 2021 draft, was helped to the locker room for X-rays after getting his right ankle stepped on in the second quarter. He returned a few plays later. Still, it was a huge scare for the home team.

Bills running back Zack Moss and cornerback Taron Johnson were ruled out with concussions. Safety Jaquan Johnson left with a hamstring injury.

The Bills continue a three-game stretch against some of the NFL’s worst teams when they play at the New York Jets next Sunday. The soft stretch started against Miami last week.

The Jaguars play at Indianapolis next Sunday. The Colts have won seven of the last eight meetings in Indy.